Very few people I know have been to Sardinia. If they have, they went with the kids and stayed on the beach. If I ask people where in Italy they would like to go, Sardinia is rarely in their top 10. Yet it has so much to offer: 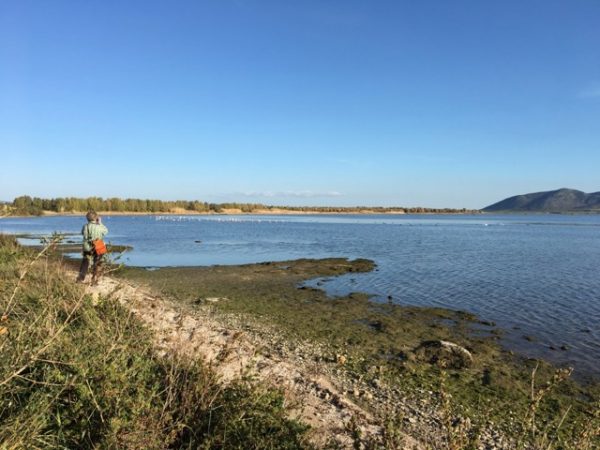 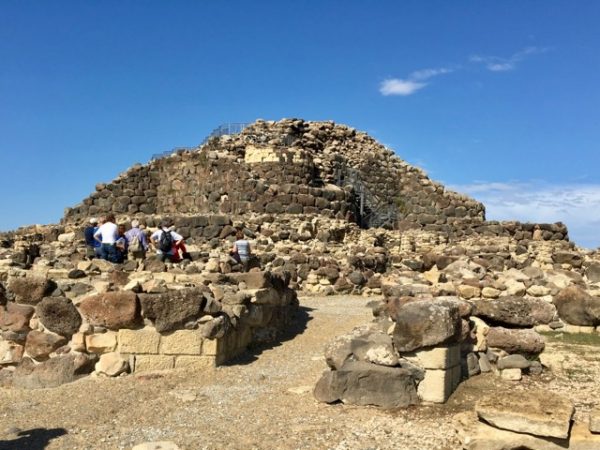 Megalithic settlements of the Nuragic civilisation from 1700 BC 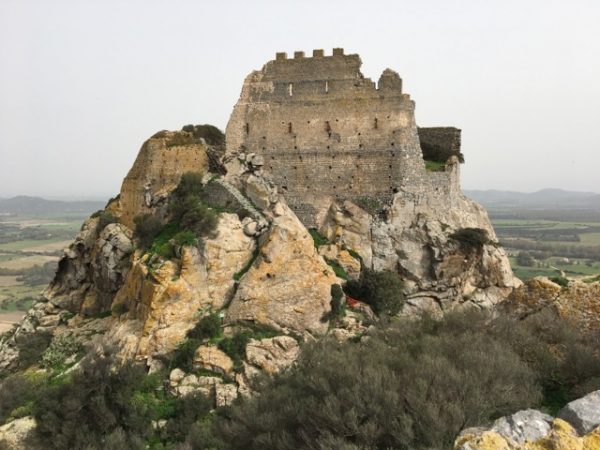 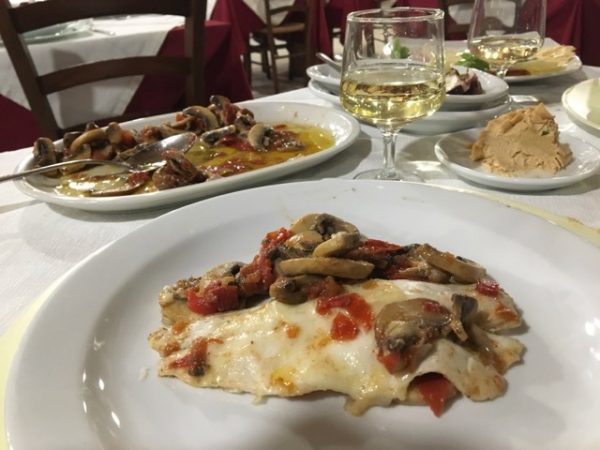 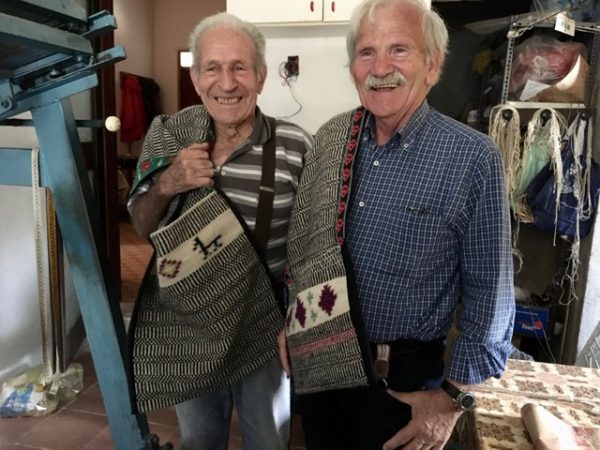 Friendly welcoming people, who have the longest lifespan in the world

Even I only went to Sardinia by accident. Some weavers who were coming on one of my Tastes & Textiles tours in Tuscany asked me to take them to visit a woman who weaves ‘sea silk’, the filaments of the beard of a sea mollusc. 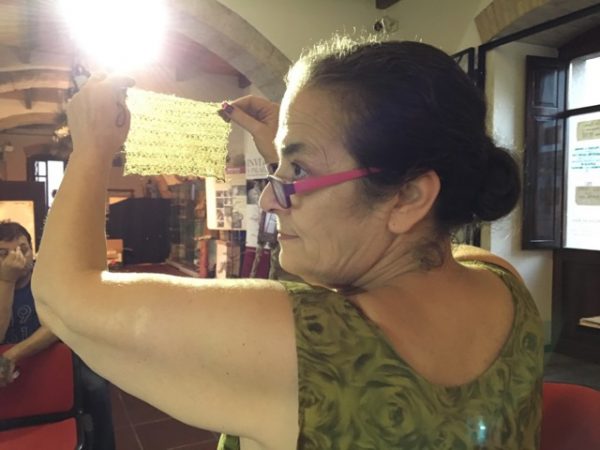 The cloth shimmers golden in the light.

Reluctantly I agreed and hopped over from Pisa, only 50 minutes by plane to Cagliari, the capital of Sardinia. It wasn’t love at first sight. But, like people, I believe places merit more than a casual glance. Many reveal their treasures only to those who patiently dig below the surface.

There’s no better way to get to know a place than to learn from the locals. Enter Antonio Arca. He was born in Alghero in northwestern Sardinia and moved to London in 2004, the same year I came to Lucca. His company Capo Caccia Fine Food imports the products he knows and loves from small, trustworthy suppliers. 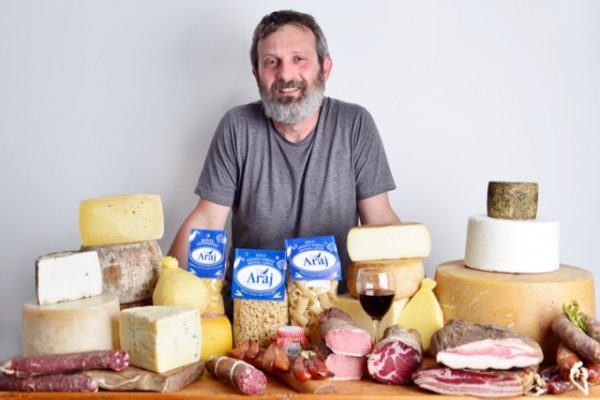 During one of my research trips to Sardinia, Antonio advised me to go to Sa Sartiglia festival in Oristano, in the west central part of the island. You can read about it here. I was travelling with friends who wanted to go to Cabras to see the Giganti di Mont’e Prama, but I was too engrossed in the festival. I was meeting farmers and family food producers at street stalls. One of these was Marcello Stara, a local rice farmer. 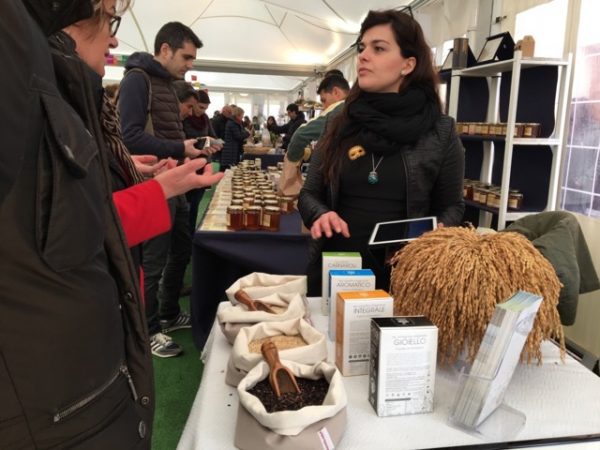 I don’t know why I’m so excited by rice. Maybe it’s the flavour of good rice (not the bland quick-cook stuff) and its versatility in different cuisines from Asia to Italy. Maybe it’s the fact that it grows in water and required communal cooperation to provide the irrigation. Maybe it’s just how beautiful it looks in the field. 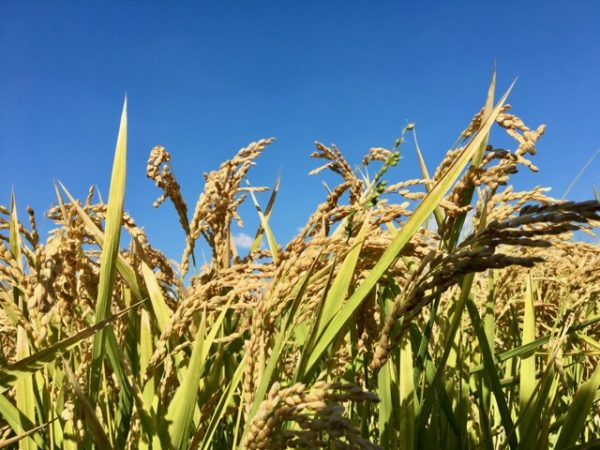 Rice in the field: golden against an azure sky

In any case, I was already conjuring a tour to include Marcello and his rice during the harvest so we could find out how it’s processed and what freshly harvested rice tastes like. But one farmer doesn’t make a tour.

I consulted Antonio. Did he know know other people in the area? Would he like to collaborate on a tour? Yes and yes. We planned a research trip together. First we needed a place to stay. For me it had to be an agriturismo (farm accommodation) so we would be investing in the rural economy. I found three suitable ones on the internet. Antonio chose L’Orto. Not only do they have enough private rooms with en suite baths, but they have a restaurant and dad is a fantastic cook. Everything local and perfectly cooked. 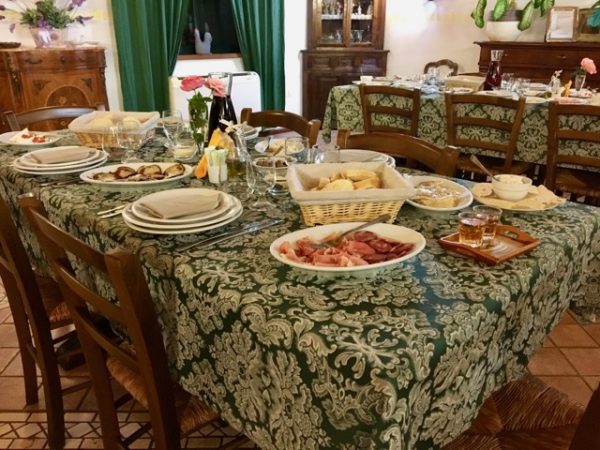 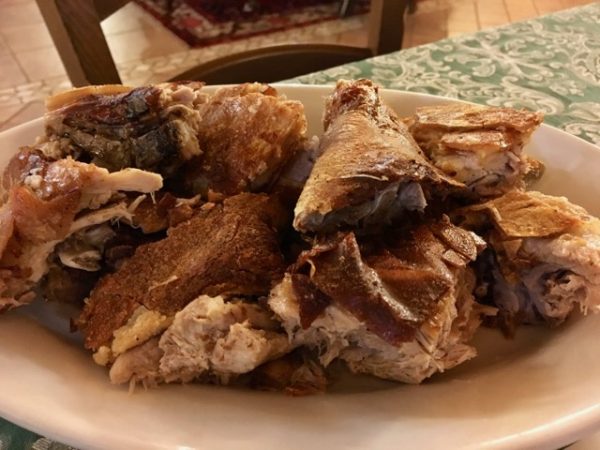 We visited Marcello and his rice fields. 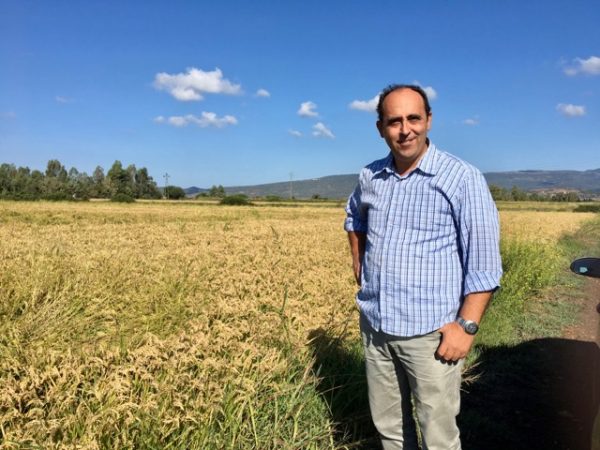 Rice was first planted in the 1930s to feed the people from marshy land. 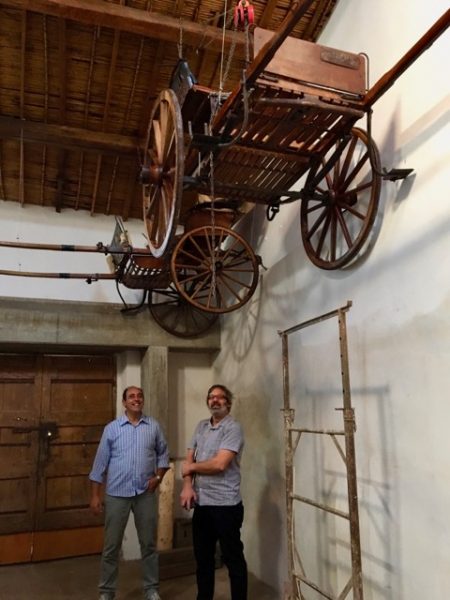 Marcello can’t bear to throw anything away. He and Antonio chat below his family’s antique wagons

He introduced us to Davide Orro and his family in the next village. Davide could almost be a tour in himself. He’s an enthusiastic winemaker and olive farmer and his sister bakes bread. He planned our day: start by making bread dough, then pick the olives, next stage with the bread, cure and bottle the olives, bake the bread. Lunch: bread, local cheeses and salumi, olives, wine. One of the grape varieties is known to have been grown in the area 3000 years ago. 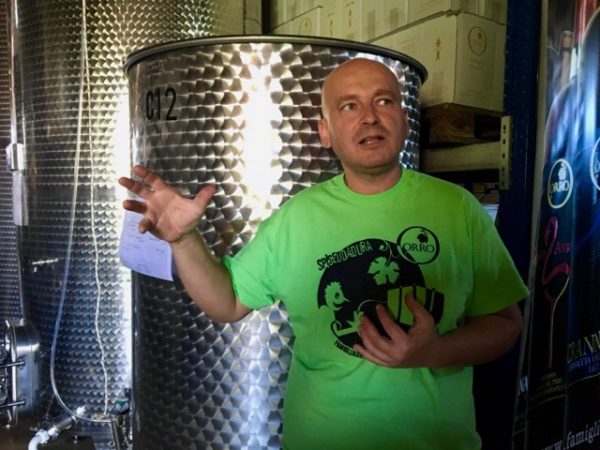 Davide in full flow as he explains how he makes his wine. 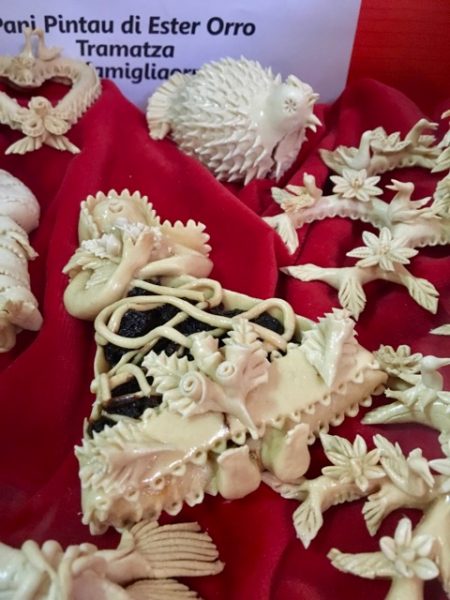 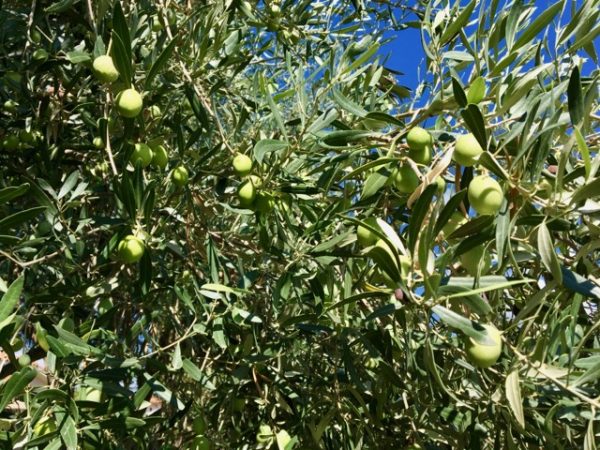 Davide’s olives ready for us to pick.

Davide suggested we go see Sandro Dessé. He’s even more versatile than the Orro family. You arrive at his farm and see a paddock of sheep and goats, one of donkeys and horses, pigs at the back and dinosaurs over to the side. Behind the pigs are fruit trees and vegetable gardens. Sandro is a practitioner of  the circular economy. 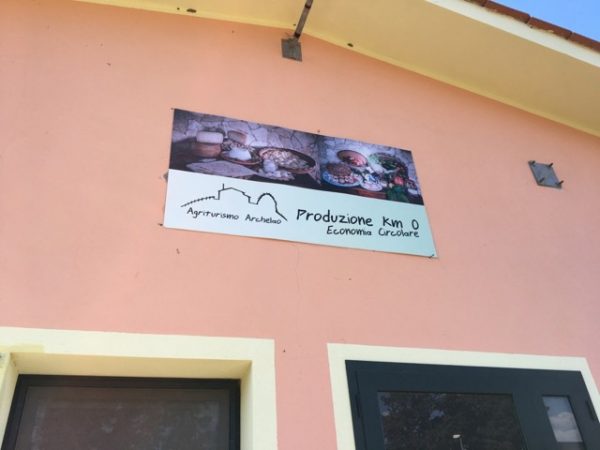 Not only does he produce the raw ingredients, but he processes them as well. There’s a small abattoir, a laboratory for curing pork, a cheese dairy and a kitchen for drying fruit and making pasta. His dining room seats 250 guests. 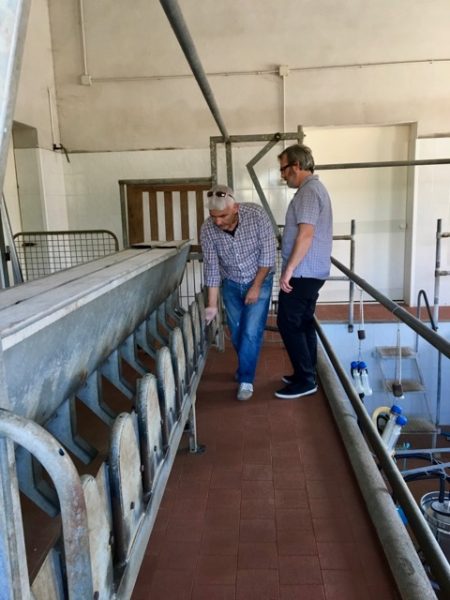 Antonio is fascinated by the sheep milking machine.

Sandro’s wild, wide-eyed enthusiasm is contagious, but we can’t do everything in one visit. We must have a tour of the farm, and it would be fun to have a lesson making the delicious stuffed pasta called culurgiones, which we can eat for lunch along with Sandro’s many other products. 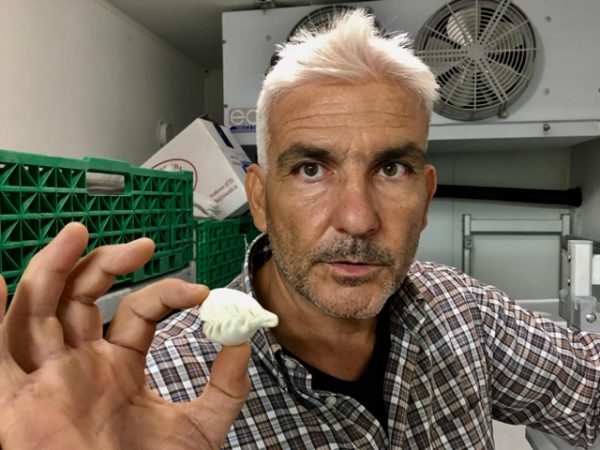 Culurgione filled pasta shaped like an ear of wheat (sort of)

Here we pick up the trail of some of Antonio’s friends. Paolo Lilliu, a butcher, who makes the salsiccia sarda, which you can cook when they’re fresh or air dry and eat like salami. 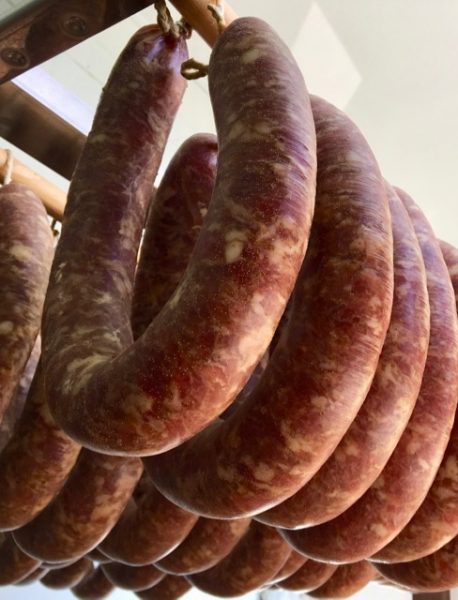 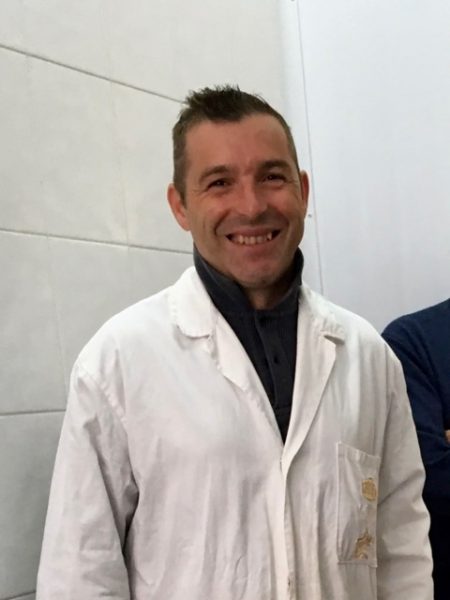 and proud Paolo who made it.

On your morning with Paolo you’ll make your own, after which we’ll go to his friend Sandro Picchedda, a saffron and peperoncino (chili pepper) farmer for a barbecue and a traditional dessert made with saffron. 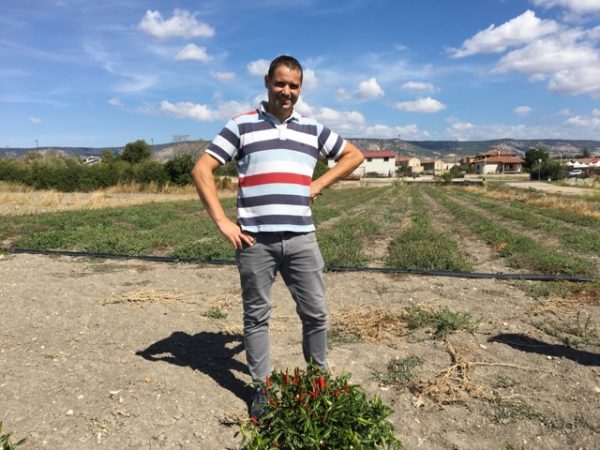 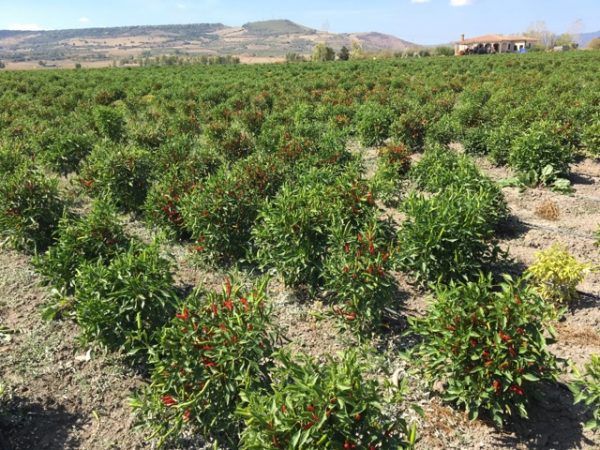 This field will be blazing red when we’re there.

Antonio’s other friends, Pino and Claudia, are distributors of traditional Sardinian products from pane carasau (thin crisp-bread) to local cheeses and salumi. They’re organising a tasting of their products. Our half hour visit became an hour and a half. Pino kept digging out one more delicacy we absolutely had to try. We are in for a lengthy feast. 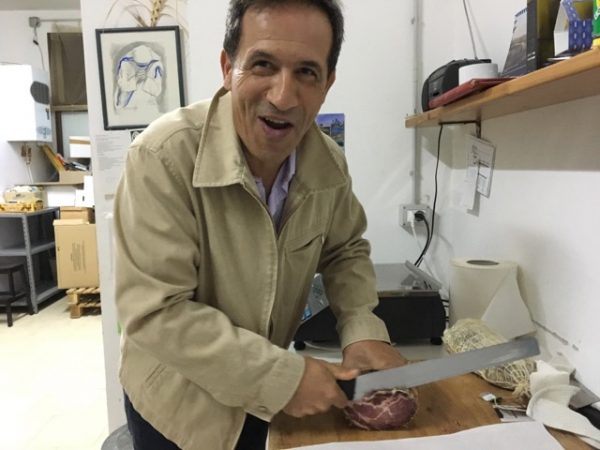 Pino wants us to taste every good product he has gathered throughout his island.

My friends came back wide-eyed and enthusiastic about the Giganti di Mont’e Prama, bigger than life-size stone statues of warriors which probably date to around 800 BC. Having been an archaeologist, I had to see them too. Luckily they reside in the seaside town of Cabras, which is also a centre of bottarga production. We met Tore at Mar’e Pontis, another passionate, slightly wild man with a mission. He told us about the technique for fishing the grey mullet, cleaning them and salting and curing the roe to make the much sought after and expensive delicacy bottarga. We didn’t have time to see the fishing and production, but on our tour you will. At dinner that night in his restaurant we sampled his excellent product. 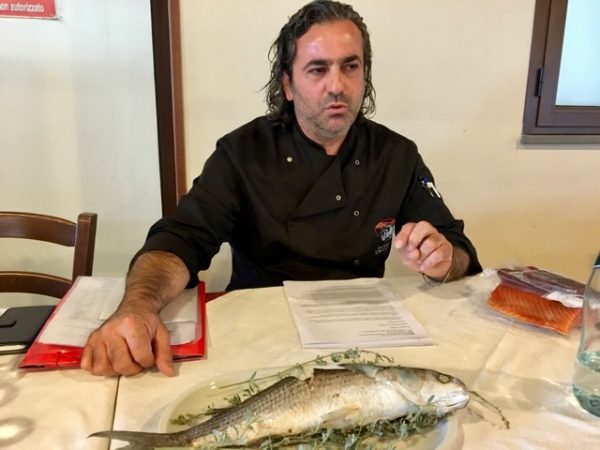 Tore and a grey mullet ready for the lab 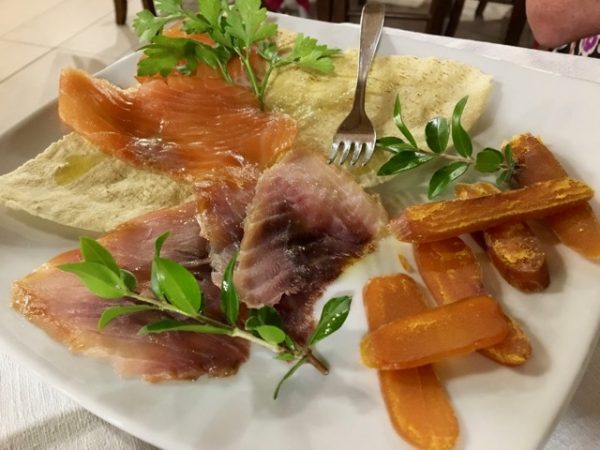 The Giganti were even more impressive than I had imagined. 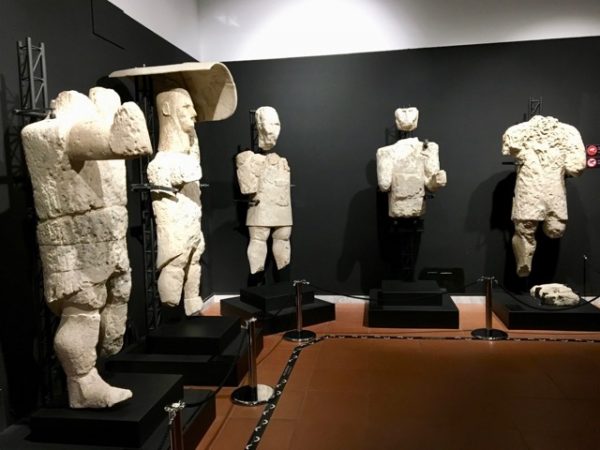 Giganti di Mont’e Prama: the glory of Sardinia’s past

They immediately became the mascots of the tour—little-known giants, the heroes of their land. Our living giants are smaller and gentler, but fighting all the same to maintain their products of quality and the role of the small farmer and producer in an ever more global economy.

There are 4 places still left for slow travellers who want to meet our crazy passionate producers, learn to make their food, taste their cuisine and wine and help keep their families and traditions alive. Please join Antonio and me from 6–13 October. Details of the tour here: http://www.sapori-e-saperi.com/giants-of-sardinia.html