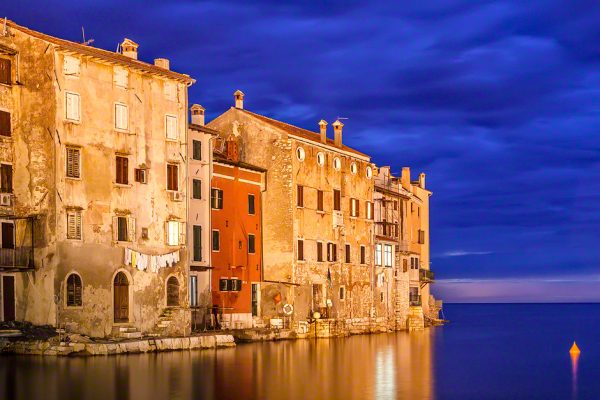 Join us on a photo spree of Croatia and Slovenia with tips on where to find the most photogenic spots and awesome adventures.

Jim and I recently guided a 9-day photo tour in Croatia and Slovenia. It was our first tour in these 2 countries but we have visited both of them numerous times and I have a special connection with this part of the world. I grew up in Austria, just over the border with Slovenia and have spent many memorable childhood summer vacations on islands in Croatia.

What we all loved about both countries (aside from the most amazing Cremeschnitten and Strudel deserts) is the sea-to-summit beauty, hospitality and versatility of these locations.

We started our tour at the airport in Venice since it’s central and easy to navigate and then drove our 2 Fiat Ducato vans south to our first destination on the Istrian Peninsula, the beautifully preserved medieval harbor town of Rovinj. The peninsula is located at the Adriatic Sea between the Gulf of Trieste and the Kvarner Gulf and is historically and culturally influenced by the Venetian and Habsburg empires, which is apparent in the towns architecture and culinary offerings (first Cremeschnitten sightings). You’ll find that every other car has an Austrian license plate pointing to the longstanding popularity of Rovinj as a European vacation destination.

Our hotel in the middle of the old town, a former bishop’s palace, had us all charmed and the first dinner at the seaside introduced us to fresh squid grilled with a sprinkle of sea salt, a touch of lemon and tasty Croatian Malvasia wine. Click here for a wealth of information on Croatian food and wines.

Rovinj is a fantastic location for shooting the magical Blue Hour at night or in the early morning hours with its lovely architecture, crooked cobbled lanes and old-fashioned street lights. 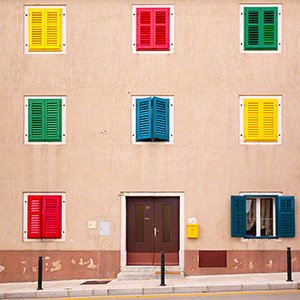 Colorful facade in the village of Vrsar in Croatia

Another very photogenic location we visited nearby is the small village of Vrsar. Stroll uphill through the sleepy town, look for fun architectural details to photograph and indulge in great seafood in the harbor and a tasty cappuccino under the huge shady tree halfway up to the town’s highest point.

If the coastal area of Croatia is your only destination and especially if you are a fan of Games of Thrones, you’ll want to visit Dubrovnik (the gleaming Pearl of the Adriatic) as well as the city of Pula in the northwest with its UNESCO listed Roman amphitheater. Another interesting architectural phenomenon is the town of Split, a medieval town superimposed onto a Roman palace dating back to 295 AD. You can also hop on a ferry for a visit to one of the many islands. Hvar is the most well-known and it’s lovely and photogenic off-season but later in the year turns into an overrun glitzy and noisy party town. 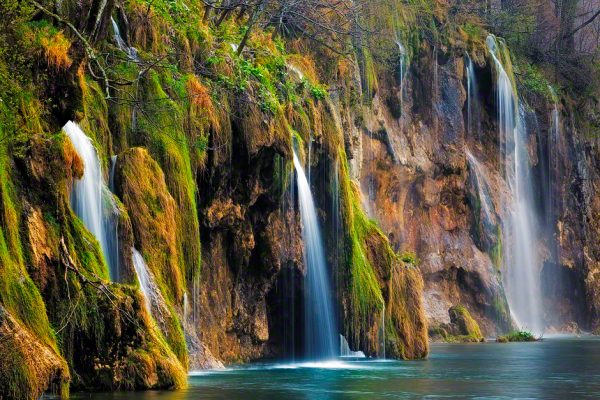 From Rovinj we drove inland to the impressive Plitvice Lakes National Park, a beautiful 295-sq.-km forest reserve in central Croatia with a chain of 16 lakes and numerous cascading waterfalls which are connected by trails and boardwalks, many of them built right over the water.

We spent three nights in a cozy B&B located just minutes from the park entrance. Our B&B provided dinners as well, which consisted of tasty soups, salads, delicious huge platters of grilled meats and vegetables and fantastic deserts, all of  which had us swooning but also begging for mercy and smaller portions. Little bottles of free Slivovitz, the local very potent distillate made from plums (definitely an acquired taste) perched on each table. It probably contributed to the eagerness of our group to merrily sing along to the old American and European folk songs a local performer regaled us with for 3 nights in a row. It was great fun to not just be photographing and eating but also to be singing and reminiscing together. Our joint rendition of “The Ring Of Fire” was particularly popular and rousing. 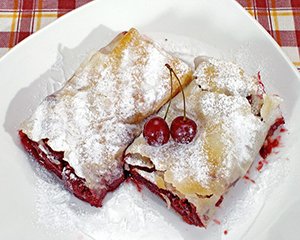 One of the many addictive strudel variations

Speaking of culinary delights: If “Cremeschnitten” was our culinary motto in Bled (see below), “Strudel” (filled with apple, poppy seeds, ricotta, cherry – you name it) was its irresistible equivalent in Croatia.

Each morning, we departed for the park entrance at 6:30 am in order to catch the first boat to the waterfall area at 7 am. A short walk took us to some of the best photo ops in the park and we had it to ourselves for 2 to 3 hours of good photography time before the tourists showed up. The crowds thin out again toward the end of the day allowing for good shooting until 8 pm when the park closes and we had to make sure to catch the last boat taking us back to the parking area. The Plitvice lakes and waterfalls are magnificent but tend to get super crowded during the summer months. We wouldn’t recommend visiting there in July and August. 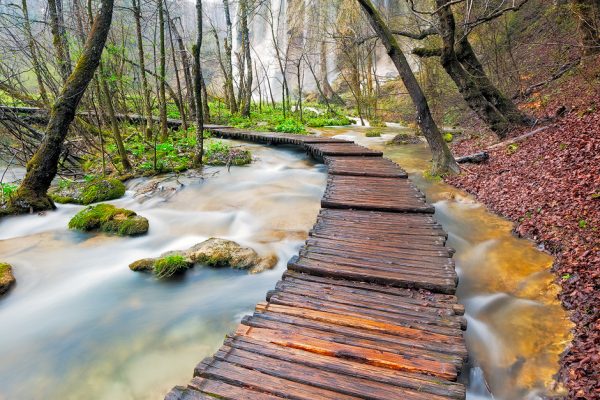 Walking on water in the breathtaking Plitvice Lakes National Park

The experience of being in the park, surrounded by so much water and lush back-lit foliage, feeling a little spray from one of the waterfalls on your skin, experiencing the majestic power and sounds of some of the big falls as well as the gentle gurgling of water flowing over small rocks and moss and the mirror-like stillness of the lakes are all absolutely breathtaking – exciting and soothing at the same time. We can’t wait to return.

St. Mary’s on the tiny island in the middle of Lake Bled in Slovenia

After spending a few days at  Plitvice Lakes National Park, we drove north into Slovenia to the charming town of Bled on the shores of Lake Bled where we spent the next four nights. This is one of our favorite places in Europe . . . very tranquil, serene and beautiful. The highest mountain in Slovenia, the mysterious snow-peaked Triglav can be seen from our cozy alpine-style B&B. Aside from photographing, you can rent boats to explore the lake or circumnavigate it on foot in about 2 hours.

Rainbow over the “wedding church” of St. Mary’s in Bled, Slovenia

We rented a traditional “Pletna” boat, Bled’s equivalent to the Venetian gondola (boat licenses are passed on from father to son), to take us to the tiny (and Slovenia’s only) island in the middle of Lake Bled. The romantic medieval church of St. Mary’s on the island is a favorite destination for weddings, although having to carry one’s bride 99 steps up from the boat landing to the church can provide much hilarity and entertainment for the wedding guests. 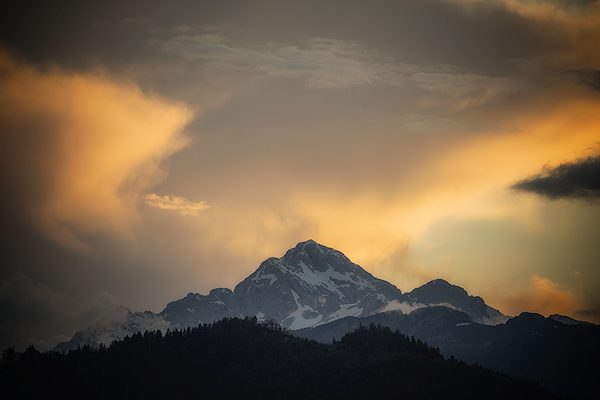 The mysterious Triglav photographed during dinner at the Bled Castle

We also photographed St. Mary’s from the shores of the lake with the medieval Bled Castle perched on its high rock and rugged mountain peaks in the background at the Blue Hour. A culinary and photographic highlight of the trip was a fantastic dinner at the elegant restaurant in this fairy tale castle with grand views of Lake Bled below. We loved photographing the castle grounds and St. Mary’s on the island in the middle of the lake below from this high vantage point. Our cameras and tripods were set up next to our outdoor table and we could leisurely photograph between delicious courses. To top it off, the magnificent Triglav decided to shed his usual cloud cover and present himself in full glory at sunset. 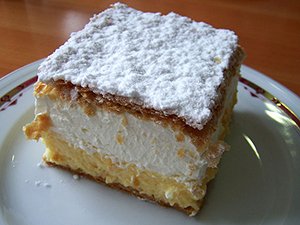 Bled is the original home of the famed Cremeschnitten. I couldn’t wait to share these delicacies with the group and finally we all had a taste (and more) of this fluffy, heavenly creamy/crunchy desert dating back to the times of the Austrian/Hungarian Empire when much of middle Europe including Slovenia and large parts of Croatia were part of Austria.

From our home base in Bled, we also took some very windy roads up to the chapel of St. Primoz to photograph it at the evening blue hour and to the lovely medieval town of Radolvice with its bee and gingerbread museums. 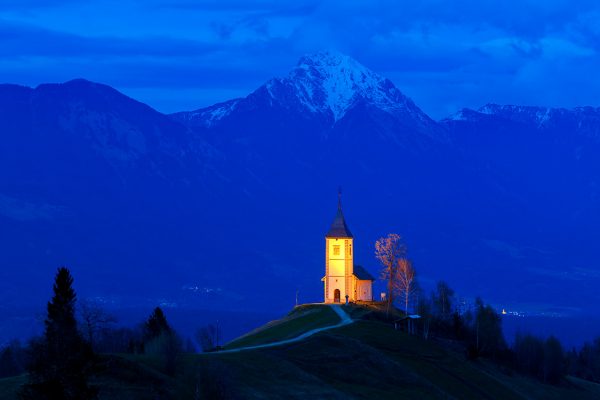 Chapel of St. Primoz high in the Slovenian Alps 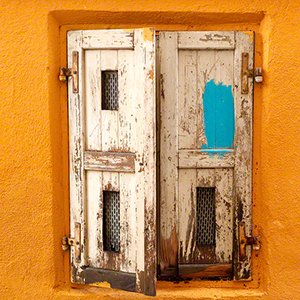 Colorful wall with shutters in Slovenia

Another worthwhile location to visit from Bled is the nearby Vintgar Gorge, a fantastic river gorge that we accessed via a narrow meandering boardwalk.

On our last day, we headed northeast up near the Austrian border to the back-in-time stunningly beautiful alpine region of Logarska Dolina with its meadow-strewn valleys and high-mountain working farms. The views from here are one of best anywhere. To quote a friend: The hills were alive with the sound of shutters. 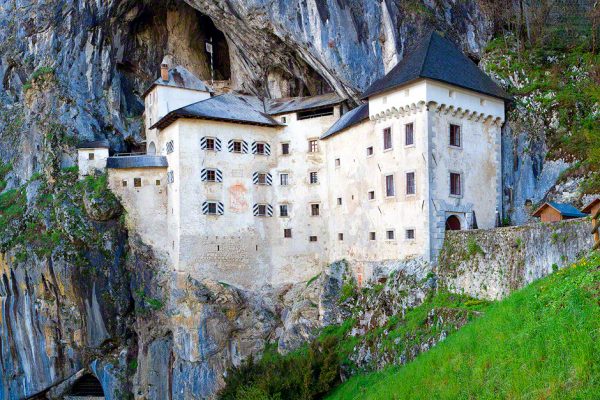 How on earth did they build this thing? Predjama Cave Castle in Slovenia

On the way back to Venice where our tour ended, we stopped at the oldest cave castle in Europe, the picture book medieval Predjama Castle which is built into a huge vertical cliff. Nearby, you can also visit the world-famous Postojna Cave, an impressive 24,120 m long karst cave system.

If you would prefer not to return to Venice and instead want to keep traveling, you can catch trains out of Bled. For example, if you wanted to explore Austria you could catch a train to the north. Or for Dubrovnik in southern Croatia you would head south from Bled to Zagreb where you can catch a flight.

We hope that you’ve enjoyed exploring Croatia and Slovenia with us. We love this part of Europe and are looking forward to returning next year. Feel free to contact us for more information.