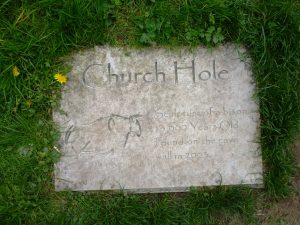 Church Hole, one of the two decorated caves at Creswell Crags

We recently visited Creswell Crags in Derbyshire – the site of Britain’s only Ice Age cave wall art which was discovered by Paul Bahn, Paul Pettit & Sergio Ripoli in 2003. Prior to their exciting discovery, it had been assumed that cave art was largely restricted to southern France and northern Spain. Although modest in comparison to the art further south – simple engravings, some incomplete, perhaps of a deer, an aurochs, a horse and a bird – they are nevertheless very significant.  The styles and themes of the art link it strongly to that of the continental Magdalenian period and it has been scientifically dated to 13,000 years ago.  However, another site up there was to take us much further back in time….

In a nearby craft centre in the village of Edwinstowe, we discovered Stone Treasures – and what an Aladdin’s cave it is!  As its name suggest it’s a treasure house of stones – but not just any stones.  These amazing and lovingly collected specimens – sometimes involving great risk and difficulty – when split open reveal magnificent fossils, dating back millions of years. 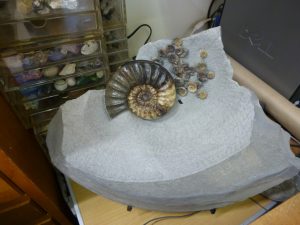 Our attention was caught by a piece and on enquiring of Richard Hawkes, co-owner with his son Mark, he told us that he had collected it from Lyme Regis in Dorset – an area we know and love, partly because we have special friends near there who we like to visit when in southern England and partly because of the coastal area’s richness in fossils. Weather earlier in the year (ie much rain and wind) had caused yet more of the frequent cliff falls revealing yet more fossils, of which the one we were gazing at was a prime specimen. The block of stone that Richard had removed from there weighed an impressive 11 stones – equally as impressive is the fact that he carried it in a back pack from the beach! Back at the workshop in Sherwood Forest, the block of stone was lovingly, skilfully and carefully worked on by Mark – revealing the marvels shown in the photograph. Isn’t nature incredible – especially when enhanced by craftsmen!

Richard & Mark are sent and also collect fossils from all over the UK and the rest of the world as this fine specimen shows: 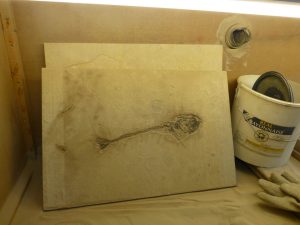 Fish from the Green River region of Wyoming, USA

Unfortunately Richard had fallen whilst out collecting rock specimens near Scunthorpe and crocked his shoulder, so the following day we went back to enquire after him – verdict still uncertain, despite a visit to the local hospital. But Mark was there and told us he hopes it will go on display in its home town at the Lyme Regis Heritage Centre for a while – that certainly would be fitting and we would love to see it in pride of place there.

Mark then very kindly gave us a behind-the-scenes visit and showed us yet more of the magnificent specimens he is working on – it looks like he has a lifetime’s work assembled in his workshop right now! It’s slow, painstaking work and most definitely a labour of love – Mark oftens works until 11.00 in the evening and obviously has a great passion for these ancient wonders he handles. 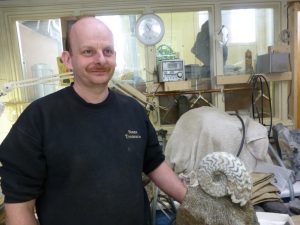 Mark Hawkes, co-owner of Stone Treasures with his father, Richard. 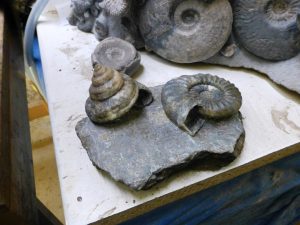 What a find – a snail and ammonite, beautifully revealed by Mark & Richard 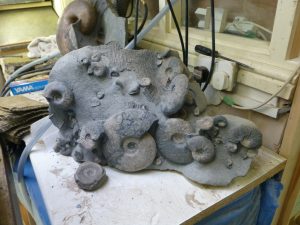 Work in progress on an ammonite cluster

Whilst viewing the Lyme Regis fossil (see above), although we felt it would be out of our reach, we enquired what price tag it had on it. £650. It’s actually a very reasonable price considering the hours of work to clean and present it to this standard, but unfortunately beyond our pocket – hopefully it will go to a museum collection which it is certainly worthy of  a loving home somewhere. So if you want to treat yourself to something very special, contact Richard or Mark at ‘Stone Treasures’!

We were able to make another visit to this amazing workshop and look what a more recent visit to the Lyme Regis area turned up: 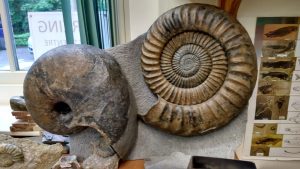 Incroyable, as the French would say!