Uncover the charms of slow travel on a French Country Adventures sample tour in words and pictures of the Basque Country where the day is long, and the culture is one of the oldest in the world. 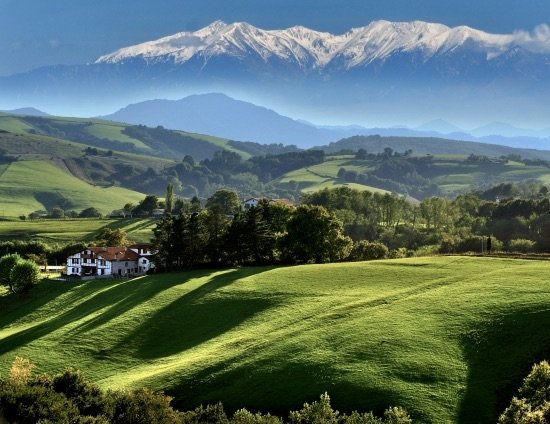 The Basque Country, Pays Basque, Euskal Herria, is located in the western Pyrénées mountains, straddling the border between France and Spain, meeting at the Atlantic Coast’s Bay of Biscay. Emerald landscapes, distinctly rugged mountains, precipitous shorelines and the rich heritage of the Basque, Euskaldunak, kept this area uniquely singular. Proudly independent, the Basque people, who are neither Spanish or French, have been living in this autonomous region since the earliest known modern man was discovered in France some 45,000 years ago. 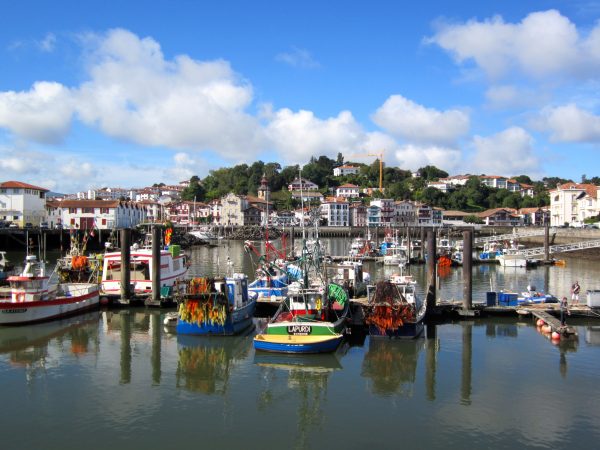 St. Jean de Luz is the most iconic fishing village in the Pays Basque. It has a working port where 10,000 tons of fish from over 100 varieties are caught each year, including tuna, sardine and anchovy. It was from this port that 15th century fishermen chased whales to the shores of Newfoundland. St. Jean de Luz has a lively old town center offering daily farmers’ markets, boutique shops selling Basque linens, berets and espadrilles, restaurants and cafés. 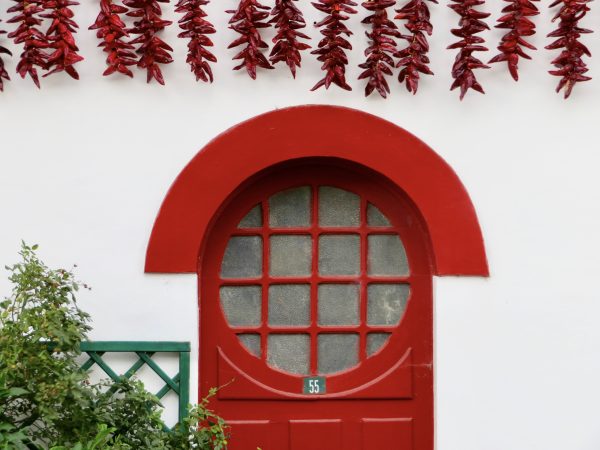 Espelette is a small, colorful village nestled at the foot of the Mondarrain mountain, renowned for its famous Espelette pepper, which arrived from Mexico by New World explorers during the 16th century. Since then this lightly spicy, red pepper has been rooted in the traditions of rural life.When autumn comes the facades of houses are adorned with strings of peppers. 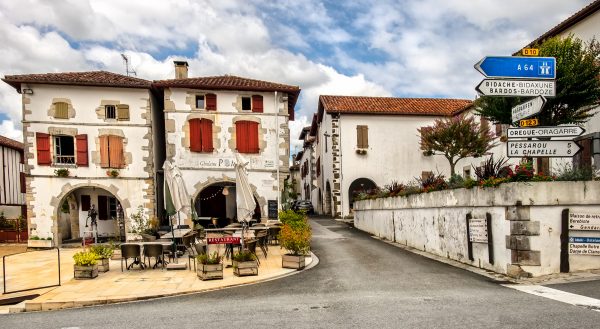 La Bastide Clairence was founded by the King of Navarre in 1314 and settled by the Gascons. The village church is distinguished by a unique courtyard cemetery paved with tombstones. In the 17th century, Portuguese Jews fleeing from the Spanish Inquisition arrived in the village bringing with them the art of making chocolate. 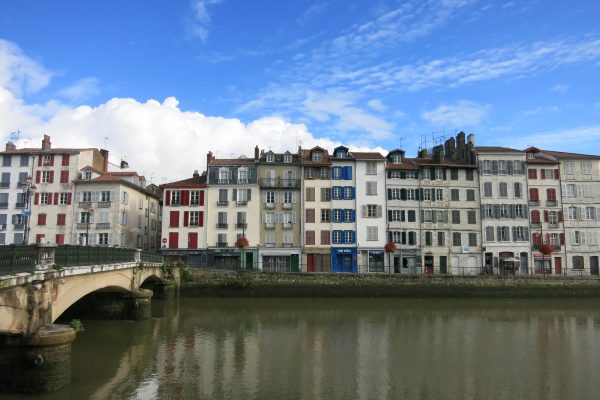 Bayonne is situated at the confluence of the Nive and the Adour Rivers in the French Pays Basque.The historic district of Grand Bayonne is characterized by its narrow medieval streets, the Gothic Saint Marie cathedral and its 13th century cloister. The Petit Bayonne district, is dedicated to the arts, crafts and traditions of the region with over 3,000 objects on view at the Musée Basque. Bayonne is considered France’s first capital of chocolate. 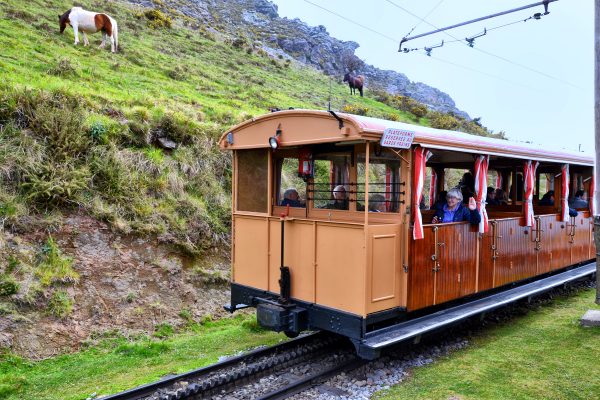 Sare is one of Les Plus Beaux Villages de France. It is a tiny village tucked below the sacred Rhune mountain. Le Petit Train de la Rhune climbs 2, 970 feet above the village and affords a spectacular 360 degree, unobstructed view of the Pyrénées, the Atlantic Ocean and the surrounding Basque Country. 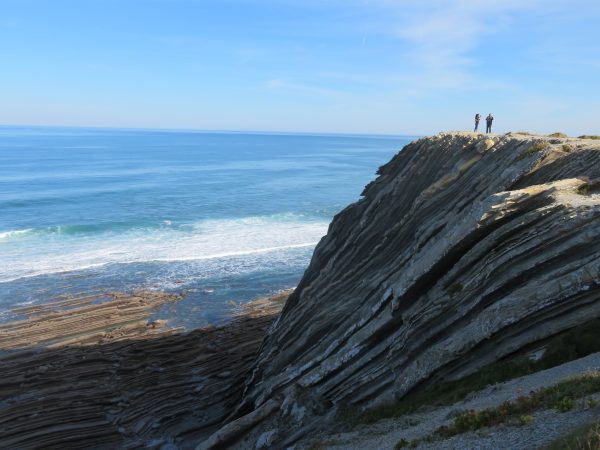 The Basque Corniche, at the edge of the village of Urrugne, is one of the last protected areas on the French Pays Basque coast. Just a short drive from St. Jean de Luz and the village of Hendaye near the Spanish border, its steep cliffs, caves and famous rocks, The Twins”, have seen millions of years of planetary
history. 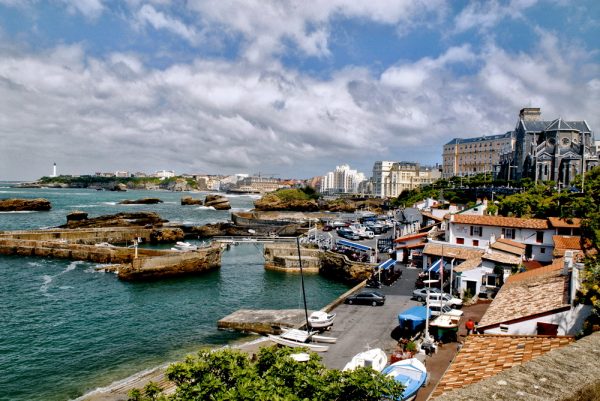 Biarritz was once a Phoenician fishing port used to send goods to Britain, and whaling port until Napoléon III and his wife, Éugenie, established their summer court there. During the Belle Epoque, thousands of people visited glittering Biarritz by the sea. In 1918 Picasso arrived, followed by Hemingway in the 20s. Frank Sinatra arrived in the 1950s with Rita Hayworth and Marilyn Monroe. Hollywood embraced Biarritz as one of its glittering incognito getaways. 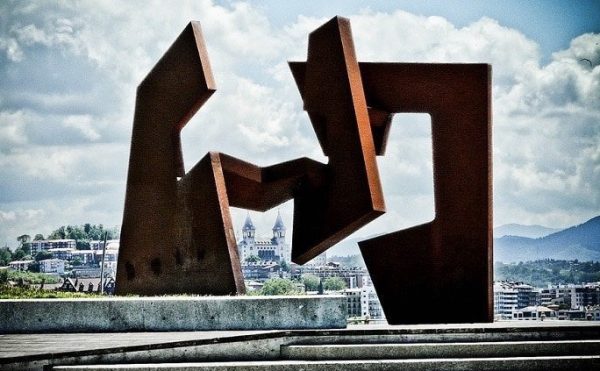 Donostia, as San Sebastian is called in Basque, is a vibrantly blended traditional and modern city, a mere ten minutes from the French border. Its circular bay is rimmed with a picturesque promenade and pristine white beaches. The city hosts the San Sebastian Film Festival and some of the most spectacular monumental art in all of Spain. San Sebastian is also recognized as having some of the best food in all of Europe with 18 Michelin-starred restaurants. While Pinxtos, Basque tapas, takes center stage here, the Basque cheesecake, can’t be overlooked. It’s a savory, decadent creation with a slightly burnt crust, which you can easily recreate at home. 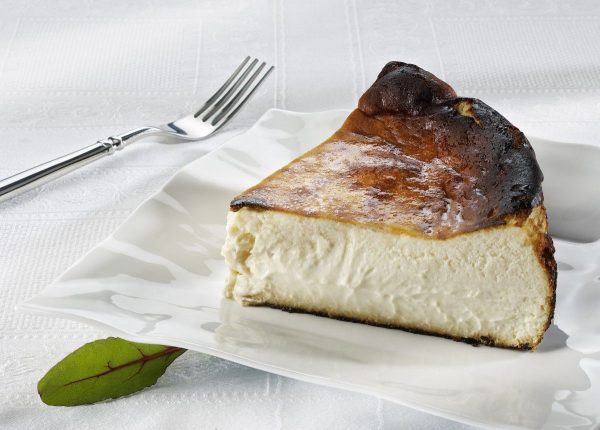 Preparation
Step 1
Place a rack in middle of oven; preheat to 400°. Butter a 10” springform pan, then line with 2 overlapping 16×12″ sheets of parchment, making sure parchment comes at least 2″ above top of pan on all sides. Because the parchment needs to be pleated and creased in some areas to fit in pan, you won’t end up with a clean, smooth outer edge to the cake; that’s okay! Place pan on a rimmed baking sheet.

Step 2
Beat cream cheese and sugar in the bowl of a stand mixer fitted with the paddle attachment on medium-low speed, scraping down sides of bowl, until very smooth, no lumps remain, and sugar has dissolved, about 2 minutes.

Step 3
Increase speed to medium and add eggs one at a time, beating each egg 15 seconds before adding the next. Scrape down sides of bowl, then reduce mixer speed to medium-low. Add cream, salt, and vanilla and beat until combined, about 30 seconds.

Step 4
Turn off mixer and sift flour evenly over cream cheese mixture. Beat on low speed until incorporated, about 15 seconds. Scrape down sides of bowl (yet again) and continue to beat until batter is very smooth, homogenous, and silky, about 10 seconds.

Step 6
Let cool slightly (it will fall drastically as it cools), then un-mold. Let cool completely. Carefully peel away parchment from sides of cheesecake. Slice into wedges and serve at room temperature, preferably with a glass of port or sherry alongside.

Step 7
Cheesecake be made 1 day ahead. Cover and chill. Be sure to let cheesecake sit for several hours at room temperature to remove chill before serving.

If you want to feel like a local, and you’re craving a more authentic experience, one that leaves you with a feeling that you truly got to know the places, people and cultures that you’ve encountered, then without a doubt, The Basque Country Tour  https://www.frenchcountryadventures.com/the-basque-country-2/ is for you. I’d be delighted to welcome you to join me next year for 10 days of exquisite scenery, fabulous cuisine. Discover what this seldom traveled, southwestern corner of France and Spain has to offer.

Saran Astia, we have time…