It is an essential part of “slow travel” to explore the tastes and smells of the area in which you travel. We run our cruises in south west France, and by reputation the people of this area have a highly developed culture of the appreciation of good food and good wine. If you drive around the villages between 12 mid-day and 2.00 in the afternoon, you will pass the occasional restaurant that appears to be besieged by tradesmens’ vans. Every person is a gourmet critic, every individual a wine taster, and these working men will drive big distances to enjoy their daily celebration of the products of the region. An essential part of every meal is a carafe of excellent local wine, and woe betide the restaurateur who serves inferior wines to his lunch-time clientele! 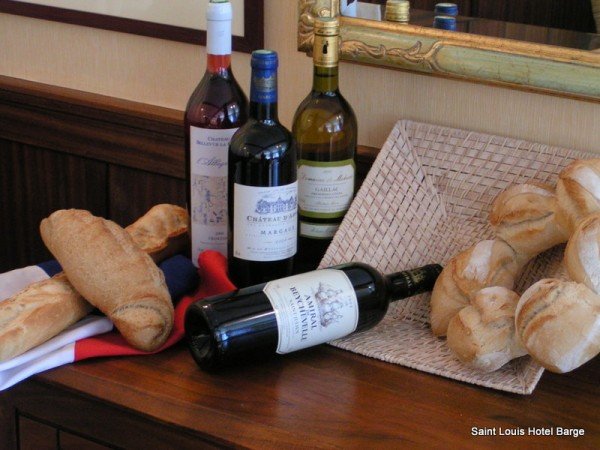 “South West France” means different things to different people, but to the wine professional it means a very specific area comprising a patchwork quilt of wine producing regions, from Gaillac to the east to Cahors to the north, reaching as far as Jurancon in the western foothills of the Pyrenees. Some of these wine regions are very old, dating back to roman times, and indeed Gaillac is the second oldest wine region in France. One point to bear in mind is that South West France, as a wine area, does not include Bordeaux. In days gone by, however, the producers of wine in these areas found their markets via Bordeaux. Shallow boats were loaded with the precious barrels of wine, and they were sailed down the rivers (including the Lot, the Tarn, the Baïse, and the Garonne) to Bordeaux where the wine was blended, bottled and exported, under the generic name of claret. It was thanks to the delicious full-bodied red wines of South West France that the trading port of Bordeaux became established as the wine capital of the world.
Things have since changed. The huge industrial monoculture of vines of the Bordeaux wine area has been established, and the traditional producers of South West France have diversified. As well as producing the red wines and the clarets that became so well known across the developed world, in the past sixty years many of the producers have added white and rosé wines to their range.

It is interesting to ponder on the differences between the wines from South West France and the wines from Bordeaux. In the most general of terms, Bordeaux producers have the advantage of their internationally-known name and huge advertising budgets, and Bordeaux wines are the subject of countless articles written by countless experts. The wines of South West France, on the other hand, are typically produced by small-scale individual vignerons who have learned their trade over the centuries, and passed it down from father to son. They are part of our “hidden corner” of France, and they are there to be discovered by the slow traveller, by the traveller who has the time and the interest to dig out the skilled artisan producers.

“What” you may ask “about the quality of these wines?” One of the references we use is Hachet’s Guide. This is a guide published every year following the professional blind tasting of over 35,000 different wines. South West France has a higher percentage of wines listed in Hachet than most other wine areas in France. We carry on the boat, for example, a rosé from Fronton that has twice in the last three years won gold at the international concours at Cannes, competing with wines from some 47 different countries.

On our hotel barge we carry some thirty-six different wines. These wines reflect a good cross-section of the quality wines from South West France. Most of them are award-winning vintages. We take a pride in our wines as a reflection of the wonderful part of France in which we cruise, and we take pleasure in introducing to our guests such secrets of this part of France that they would have great difficulty discovering by themselves.

As an aside, let us consider the Hundred Years War. This war took place in south west France between 1337 and 1453 – and thus lasted for no less than 116 years. What has that to do with the wines of the region? It has been put to me in all seriousness that the combatants on both sides had no interest in seeing the “war” come to an end, for the food and wine of the region provided them with an excellent lifestyle, marred only by the occasional skirmish! Arguably, this was the beginning of wine tourism. Slow warfare has now become slow travel!