Barbara and I visited the Venice Art Biennale for the first time in 2013. It was such a spectacular exhibit we couldn’t wait to return for this year’s event and made it a part of our Venice Arts Sojourn. There’s neither time nor space on this blog to do any justice to this expansive exhibition, but in my next two posts I’ll try and give you a small taste. 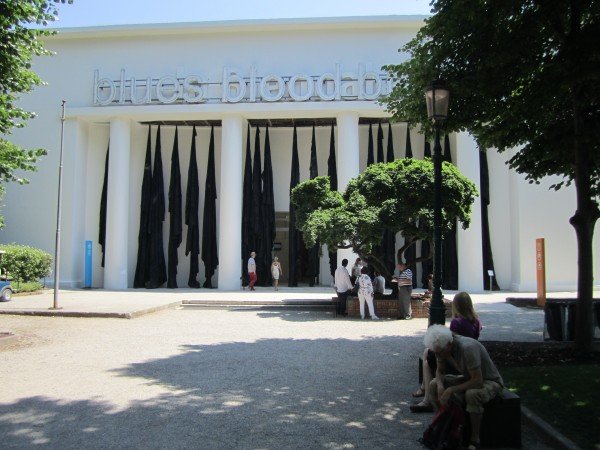 The entrance to the main Giardini Pavilion

The Biennale is, arguably, the world’s premier international art exhibition. It is curated by a different director each time so one never knows what to expect. In addition to the main pavilions at the Giardini and Arsenale there are individual national pavilions curated by each participating country’s directors as well as off-site satellite exhibitions throughout the city.

Unfortunately, the grim entrance to the Giardini Pavilion set the tone for much of Okwui Enwezor, the 2015 director’s vision. The facade was draped with black and blue cloth by artist, Oscar Murillo, below Glen Ligon’s statement in neon, “Blues, Blood, Bruises.”  The airy rotunda just inside seemed promising enough with a mix of monumental pieces by Fabro Mauri, except for the sound of someone retching violently at high volume coming from a small side room. French artist, Christian Boltanski’s grainy video loop of a man vomiting blood left a definite impression: this Biennale is not going to be a lot of fun. 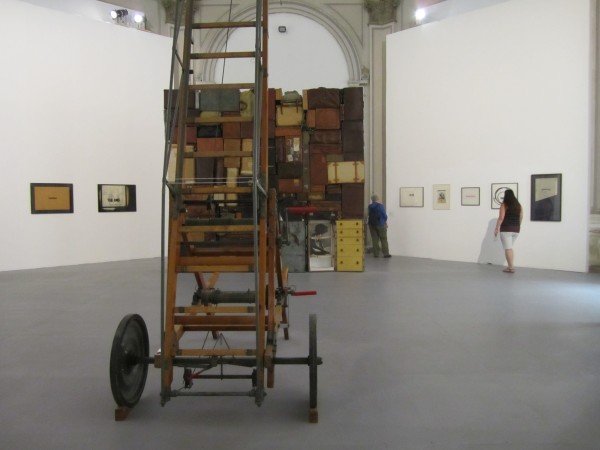 The rotunda with works by Fabro Mauri.

The Director had a very clear socio-political agenda that not only infused, but often overshadowed the art itself. The most telling example was Arena, a large red hall surrounded by bleachers –  a collaboration between Enwesor and architect, David Adjay. It was conceived as a venue for readings and performance, however the main event was the reading of Karl Marx’s, Das Kapital, all three volumes in their entirety. Perhaps the largest space in the Giardini was devoted to Arena, and ironically, it seemed to generate the least amount of interest. During our visit only five or six people stopped to listen to the two men, dressed in black, reading from Marx. Gee, I wonder why? 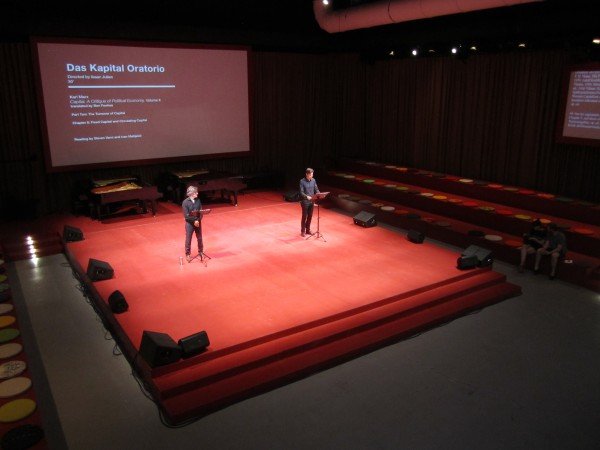 “Arena” A large red stage with bleacher seating and a balcony in which various readings and performances are held.

Fortunately there were some brilliant individual moments throughout the rest of the pavilion, most notable for me was Swiss artist, Thomas Hirschorn’s installation, Roof Off,  that conveys the very real impression of a hole in the roof of the pavilion with a cascade of cardboard and other detritus pouring down. 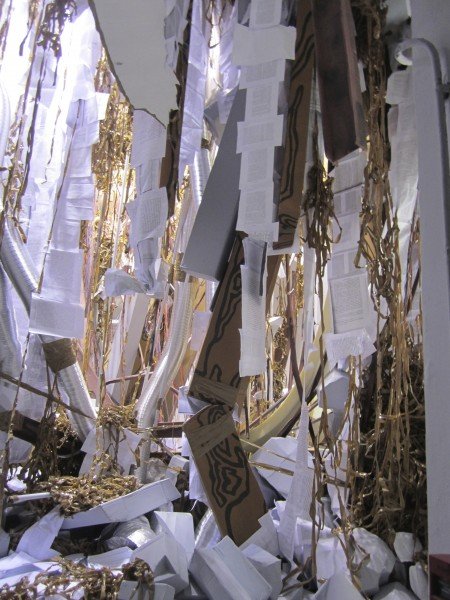 Roof Off by Thomas Hirschorn, High power daylight bulbs create the illusion that the ceiling has been torn away. 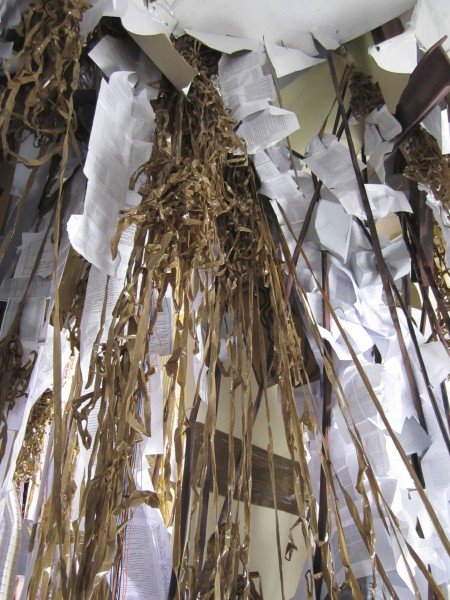 The various national pavilions at the Giardini site were, as a rule, more successful (and generally more upbeat) than the main pavilion.

The Russian Pavilion housed compelling installations by Irina Nakhova. The oversized pilot’s helmet contains a video projection of the artist’s face displaying only the subtlest of movement. 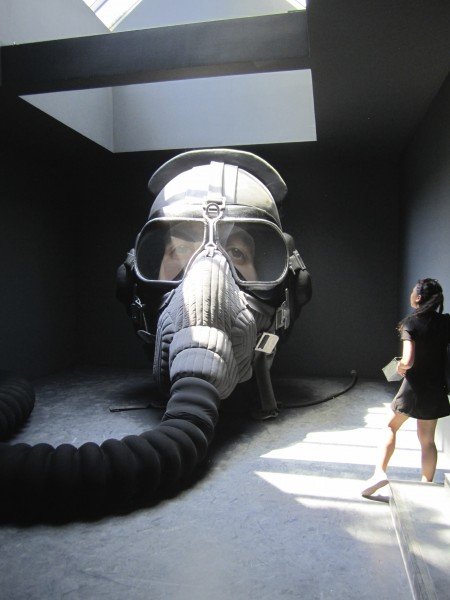 In the Russian Pavilion. Showing the scale of the installation 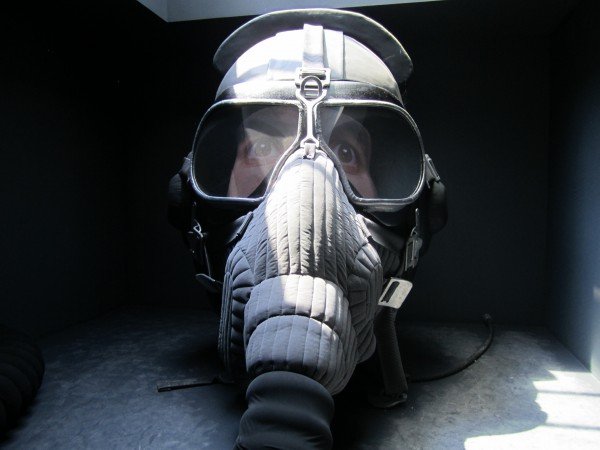 More than a bit disconcerting when you notice the “pilot’s” eye movements and changing facial expressions.

Another of Nakova’s installations is a multi-media, 360 degree work with a curious projected rectangle in the middle of the floor. In the room above the installation viewers were encouraged to walk on a glass plate in the floor, the dust on their feet leaving varying marks on the glass plate. I could not determine if the image in the room below was somehow projected through the glass opening or from another source – brilliantly conceived and executed. 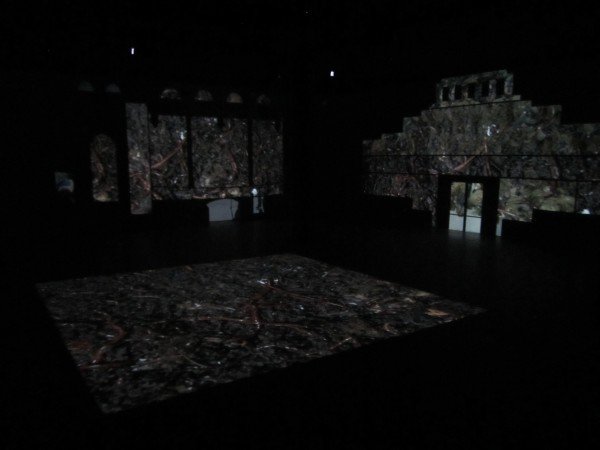 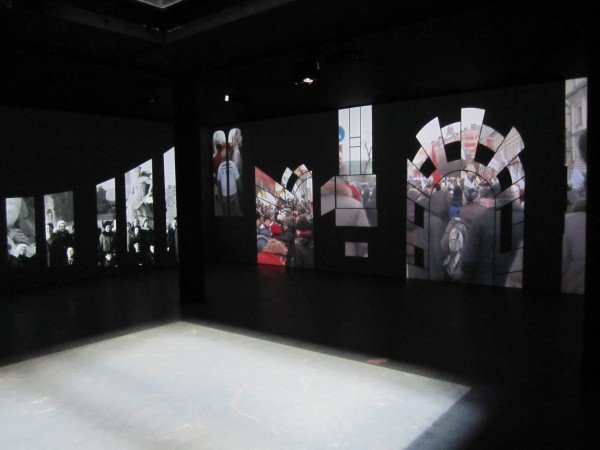 In the Japanese Pavilion, artist Chiharu Shiota created a stirring, magical installation. The expressions on exhibition-goers faces reminded me of children let loose in a wonderland. 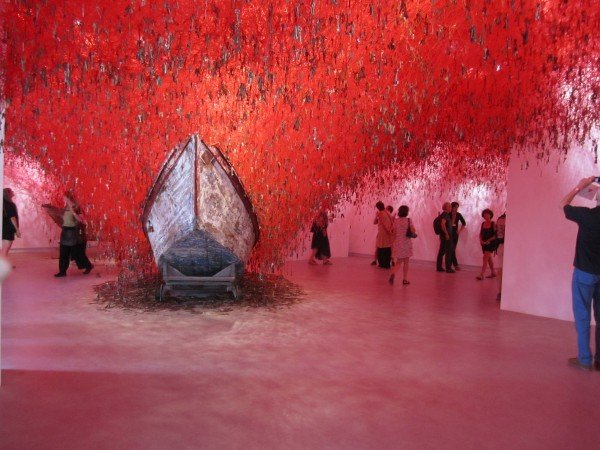 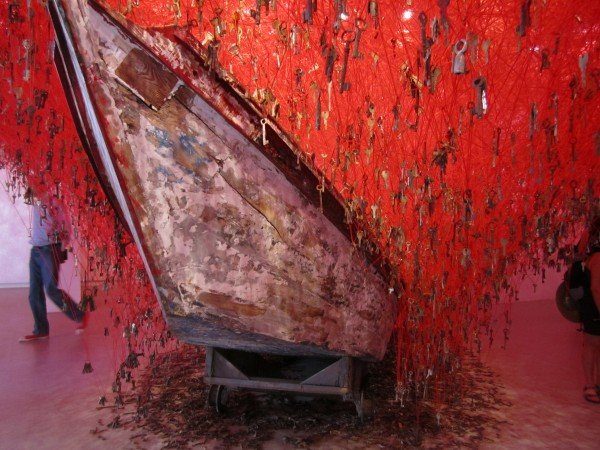 The boat was also filled with keys 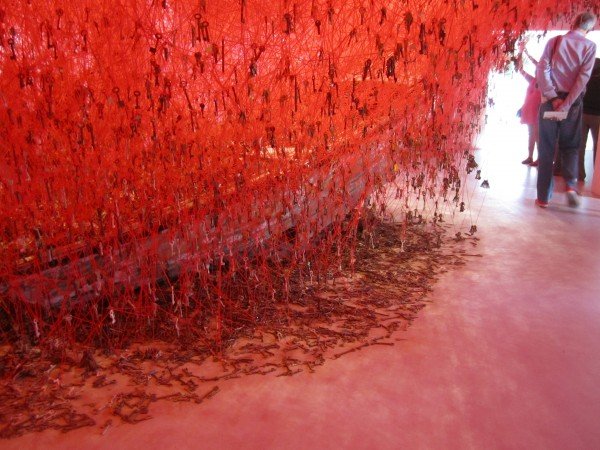 Whether or not it was the finest art at the Biennale is for someone else to decide, but the hands-down winner for most fun had to be the Canadian Pavilion, by the art collective, BGL. Barb and I had just taken a lunch break at an on-site outdoor cafe. On the back side of the cafe a busker motioned for us to enter a rather cheesy-looking convenience store. Figuring she was just trying to drum up business we almost passed her by. She assured us it was part of the Biennale. 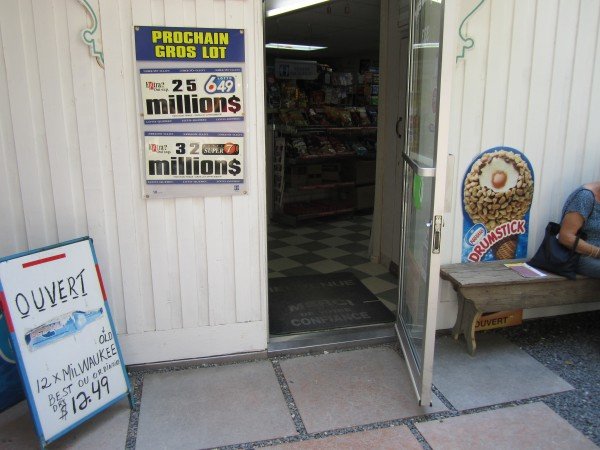 The entrance to the Canadian Pavilion – Yes, it’s art!! 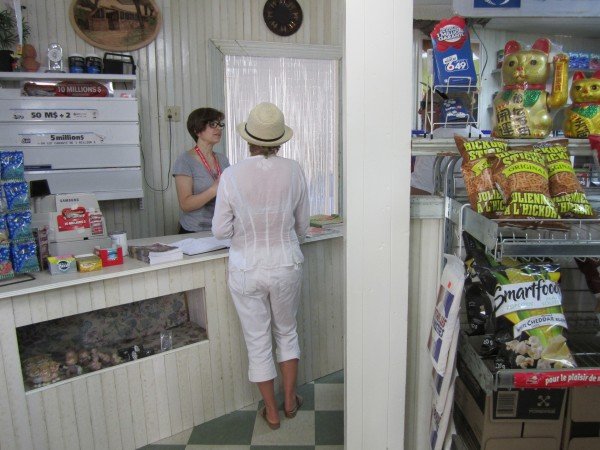 The interior at first looks like any cheap roadside convenience store, complete with chips and lottery tickets 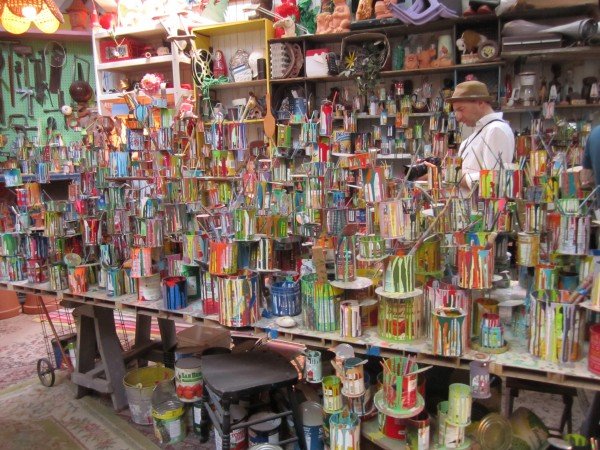 As you explore deeper the items “for sale” become more bizarre 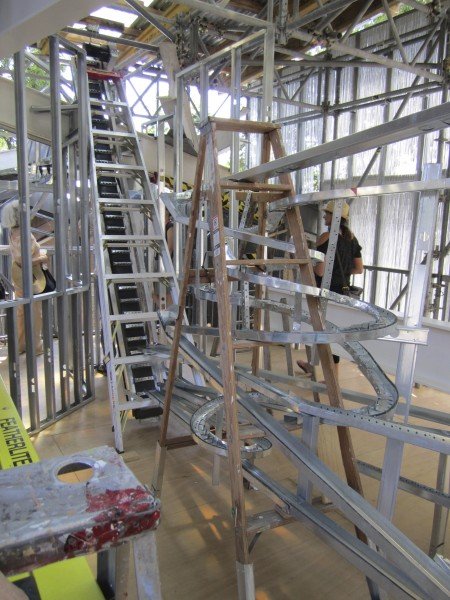 The installation culminated in a Rube Goldberg-type contraption in which exhibition-goers may drop a euro coin and watch it zig zag down a series of tracks. 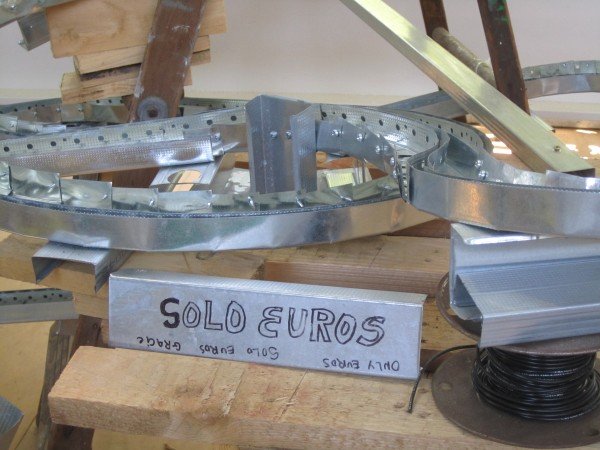 We saw several smaller coins being dropped. They tended to clog the mechanism.

I’ve not even scratched the surface of our tour of the 2015 Biennale. If you have even the slightest interest in contemporary art I’d encourage you to try and make it. The Biennale continues through November 22. Although I’ve been critical and did not think it measured up to 2013, we can’t wait to go back and will be leading another group in 2017. To be continued in my next post – stay tuned!