The Concurs de Castells is an amazing event that is attracting a lot of worldwide attention. This bi-annual competition of Castellers (human towers) is held in even years on the first weekend of October in Tarragona, Spain. 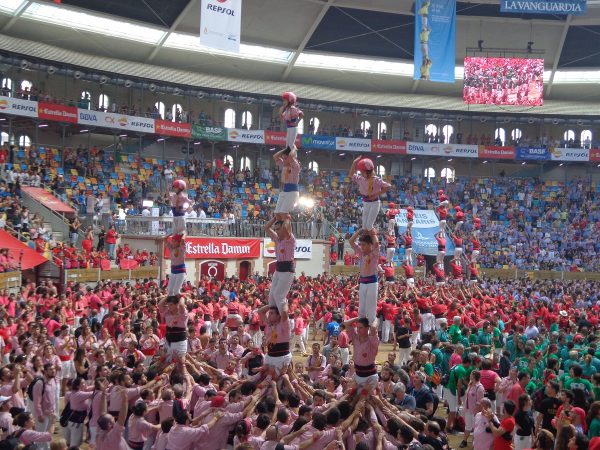 The tradition of Castellers is a Catalan one, and every visitor to the Catalonia region in the northeast Iberian peninsula should try to see a demonstration or competition. There are many opportunities to see them, but the be-all end-all for the Casteller aficionado is to go to the Concurs. In the months leading up to the event, teams of Castellers from various cities and towns build their towers in hopes to get enough points to qualify. The points are based on the level of difficulty of the towers, how many are completed, and various other rules. You can find more information about qualification here.

For my purposes here, I will explain how to get tickets and also what to expect at the event.

It is not easy to get tickets to the final competition, held on the first Sunday in October during the day. I was successful in 2016 – I was not successful this year. Saturday’s event (in the late afternoon and evening) is much easier to get a ticket for.

First of all, the organizers do not announce the sale of tickets until a week or two before they go on sale, and they do not make it obvious, especially on the English and Spanish pages. The main page, in Catalan and on their Facebook page is where I found most current information. Before the tickets go on sale, and even after the sale has been announced elsewhere, you will see this: 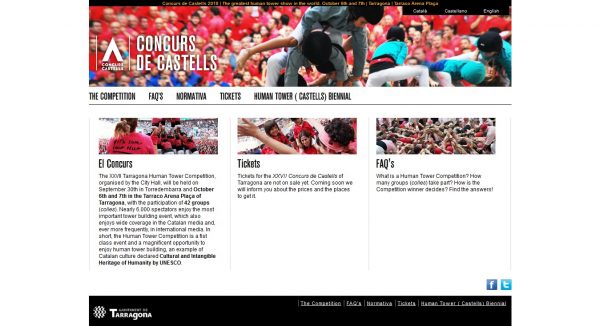 Eventually – a few days before, in my experience – they will update the English page to give the information about the sale. But now how to actually buy the tickets. The ticket link won’t be posted until literally seconds before the sale. This has been my experience, anyway. There are two kinds of tickets – one for standing (cheaper) and one for a seat (general admission, and more expensive.) Go for the seated option immediately. 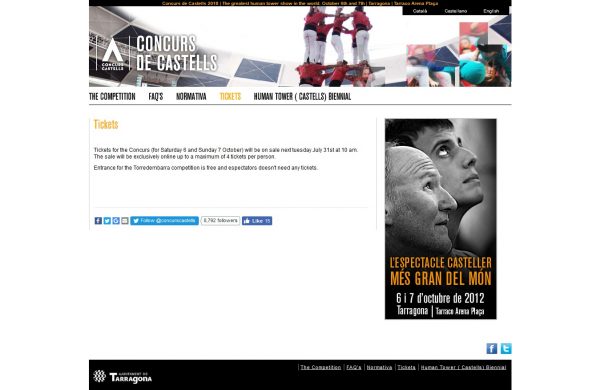 In 2016 I was able to get into the ticket site as soon as it was posted, and get tickets into my basket – and the bank the organizers were using accepted my credit card. This year I did not have the same luck, trying from the U.K. I managed to get tickets into my cart, after many many attempts that timed out. But the Spanish bank would not accept any card, and I tried many. It was extremely frustrating and I was only one of hundreds who had the same problem, I assume. I kept my “case numbers” and appealed to the organizers with the situation, but they could not do anything about it. I recommended they take some other form of payment, like paypal, as it would probably work better.

I was not able to get the bank to work with me for a ticket on Saturday either. I had to get a friend in Tarragona to get me one. The good news: there are usually tickets to Saturday’s competition. The bad news: the Sunday competition sells out in a few minutes. As you can see here, you can get a ticket for Saturday. Sunday is sold out. 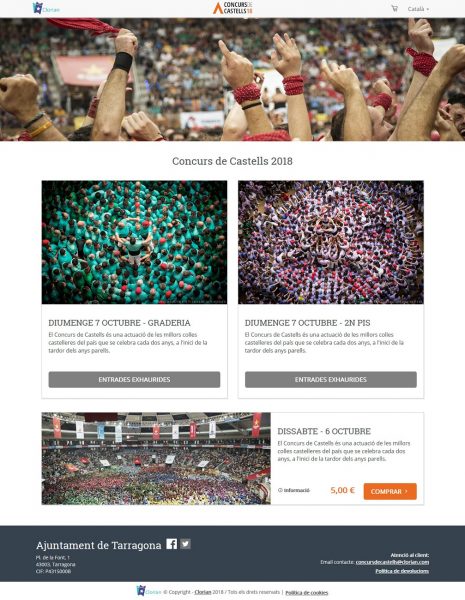 I hope these screenshots are useful when the website changes again, after this years competition. Now lets get on to the actual event.

The Concurs is held in the old Tarragona bullring, so it is a big circle. Seats are general admission. When I arrived in 2016 with a group of eight, we got there just before the beginning and it was pretty chaotic. We got separated, but eventually we found each other and had a little section of seats where everyone came and went. When you arrive, look for the newspaper called Diari de Tarragona which they may be handing out at the entrance, or buy one before you arrive. There is an insert that has the various teams and their position in the bullring for the competition. 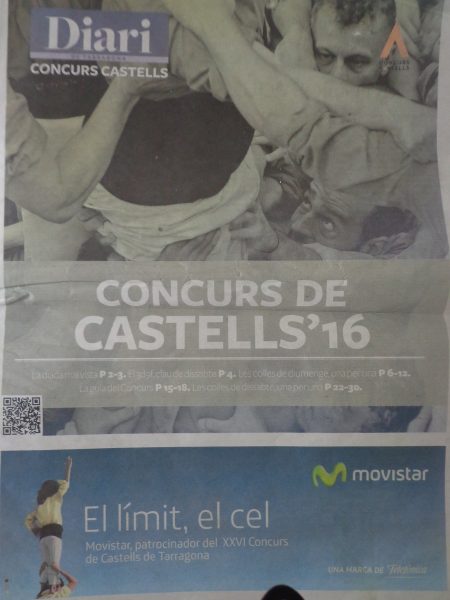 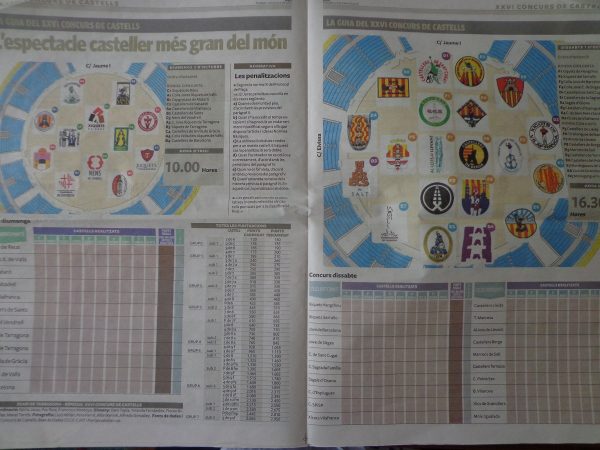 Before the competition starts, the crowd sings the Catalan national anthem. There are a lot of politicians there, this is a big deal, and it is quite emotional. 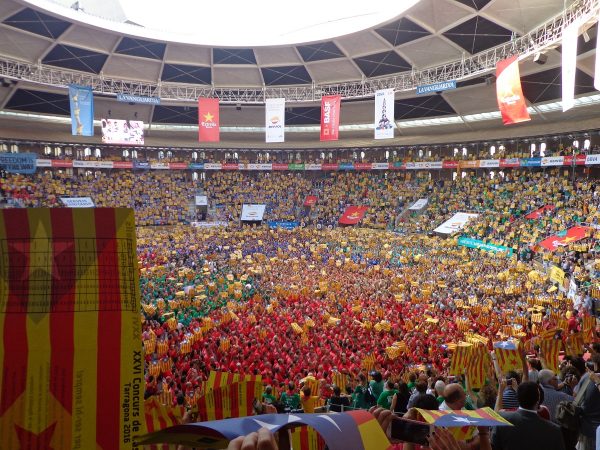 On Saturday, 18 teams compete. On Sunday, the big finale, 12 teams will compete. They each have the opportunity to build five castells. It goes on for hours – seven, in 2016. You can go out to get a bite to eat, just make sure that when you leave, you get a stamp that you are returning. Some people brought food with them. You can buy water, beer and vermut in stands around the bullring. I love vermut, but most of the competitors drink beer! Outside the bullring but still inside the ticket area, is a place where castellers hang out to take a break, and where they have some stands to buy souvenirs and other items. In 2016 there was even a “casteller wine” for sale by the bottle. 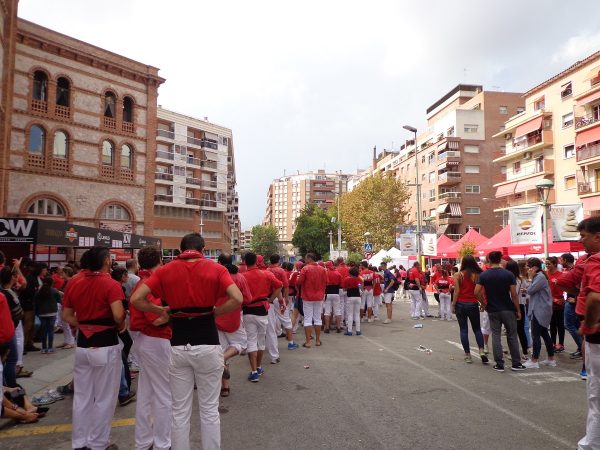 Throughout the day the teams will try to build the hardest, and sometimes rarest of towers to increase their points. I have seen many castells built over the past few years and hardly ever see one fall – except at the Concurs. Many, many towers fall so just be prepared for that. No matter – it is glorious to be there, and to witness this amazing event. 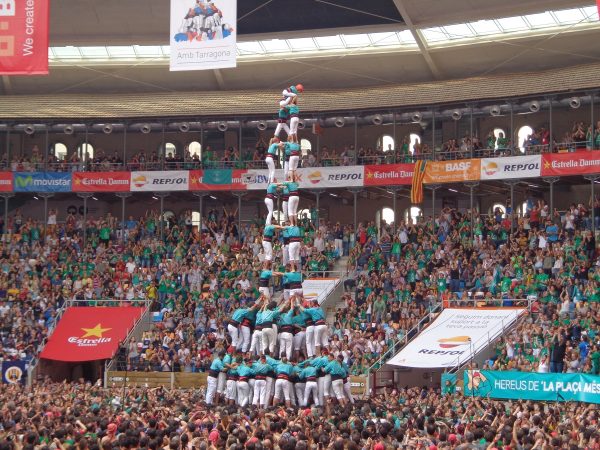 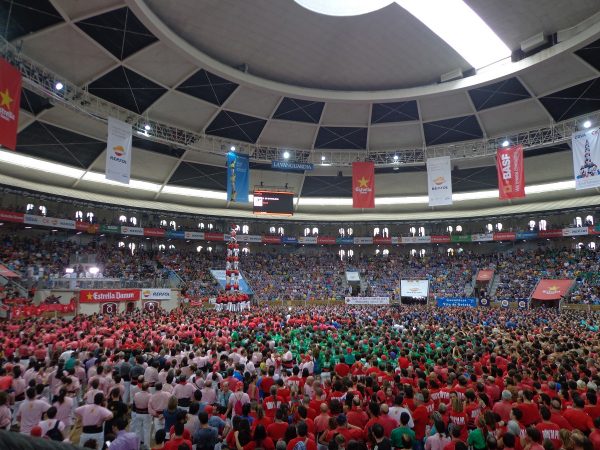 In the beginning of October I will go to the Saturday competition and will be able to comment on what that one is like. There is one competition the weekend before, in Torredembarra, and it is free with no ticket necessary. If you are visiting Catalonia, and want to see the castellers but cannot make this competition, you can find a calendar of performances, held in various towns and cities over a period of months, here.

If you would like to go to the Concurs in 2020 on a GrapeHops tour, please get in touch. There will also be a tour in the Catalonia region in September of 2019.