Last month I visited Tarragona, Spain to spend a few days experiencing the Festival of Santa Tecla.  This 11-day annual festival is a whirlwind of parades and processions, fireworks, folk dancers, marching bands, live bands, and non-stop partying in the city’s bars and restaurants.  I wanted to experience it all – but my main reason for going was to see, up close, the castellers – human pillars – in action. And boy was I not disappointed.

Tarragona is in Catalonia, the coastal chunk of northeastern Iberia straddling France, where the people have their own language and customs – one of which is the building of castells. This tradition, begun at the end of the 18th century, is continued today in festivals and exhibitions all over Catalonia.  Thousands of spectators fill streets and town squares to watch as up to ten layers of people climb up each other to culminate in a child at the top.  It is a thrilling, nail-biting, and happy-tears-inducing thing to watch.

Before the exhibition or competition, the colles – teams of castellers – arrive in the square accompanied by music.  The various colles can be identified by their colored shirts. 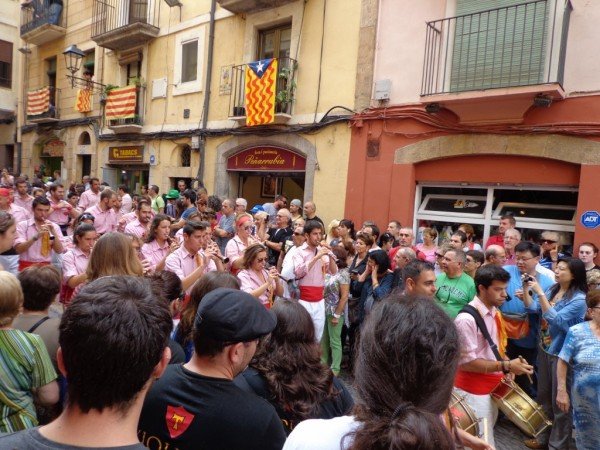 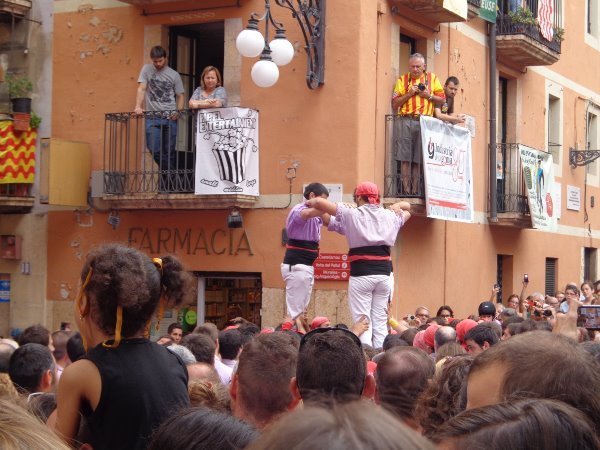 Now, a strong base is formed and the rest of the castellers start to make their way up.  The strongest hold up the bottom, and now you’ll see women and teenagers starting to climb up the pillar. 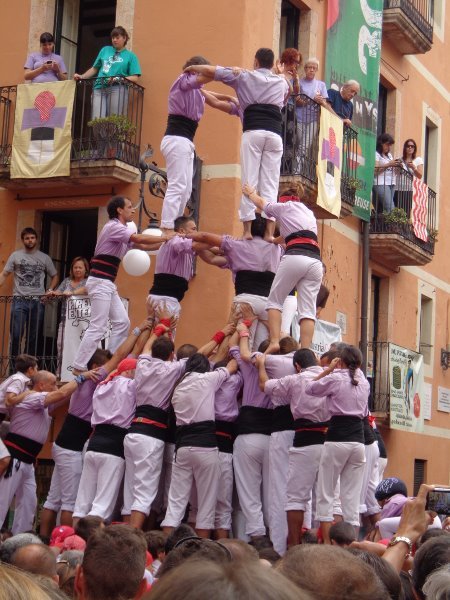 After four or five levels are formed, children start to make their way to the top. At this time, a group of musicians begins to play; the crowd gets quiet. 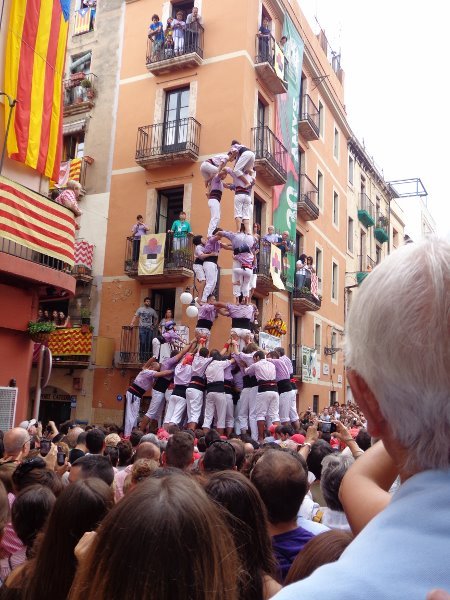 The top three levels of the castell is called the pom de dalt and these castellers are children.  What is difficult to see in the photos is the exertion and straining of the castellers at the base – the youngsters going to the top must climb very quickly. 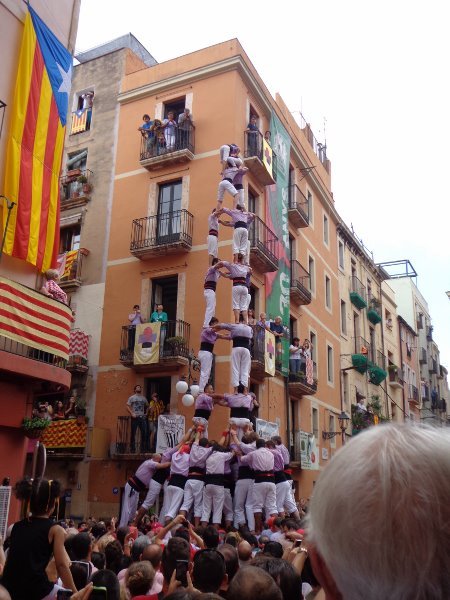 Once the littlest casteller reaches the top, the child raises one hand in the air – the castell is completed! The child shimmies down the pillar, followed by the other children, then the adults.  The atmosphere is tense until the second level, when the danger of a fall has passed.  The crowd erupts, helped along by the castellers on the second level who are clearly ecstatic and who gesture to the crowd for more applause. 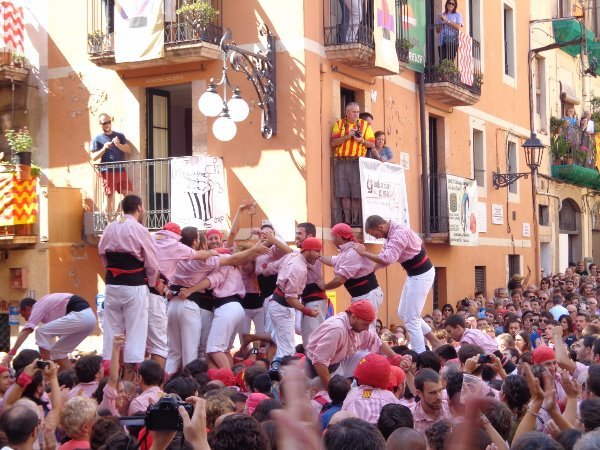 There are different sorts of structures in a castell – some with more people, some with less. 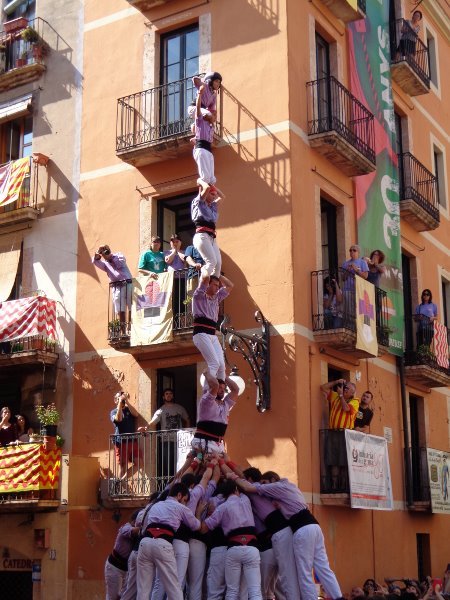 Sometimes they even walk.  This pillar, supported by its pinya, is walking DOWN the steps of the Tarragona cathedral.  They will walk all the way to the city hall, with spectators lining the streets and following their local colles. 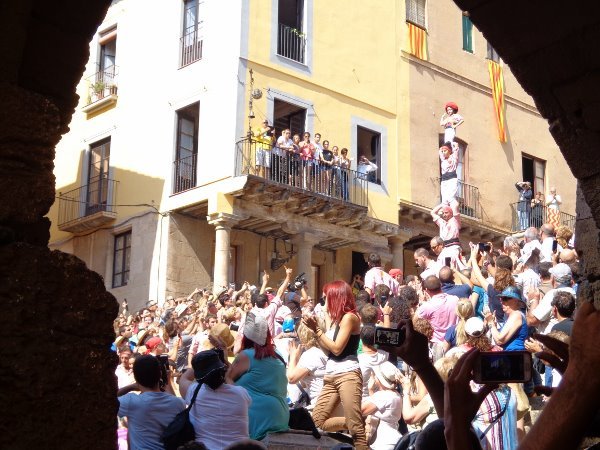 The children are the stars of the show.  It is clear that the pillars could not be built without them, and when they walk by in a walking pillar, they wave and smile at the crowd with a regal look. 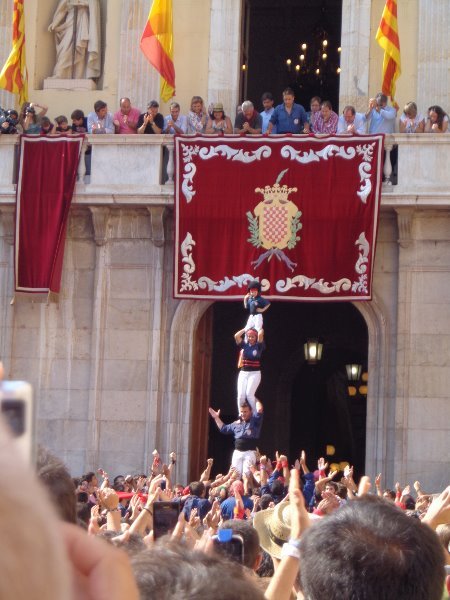 The joy and excitement of the crowd when the castellers create a successful pillar is palpable.  There are falls – we witnessed two on the days I was in Tarragona.  Another job of the pinya is to break the fall of any castell, and the children on the top wear helmets.  Even with that, it is a scary thing to see a fall and that is what makes the building of a castell so intense to watch.  This intense feeling, the joy and the worry, the music and the children – all of it creates a sense of community that is admirable and enviable. I am in love with the Catalan people, and much of it has to do with the castellers.

To see my video of a castell being constructed, click here.

There are many events and local festivals all over Catalonia where you can see the castellers, including the “Casteller World Cup” bi-yearly on the first Sunday of October in even years, or the Fiestas de Santa Tecla, as I did. The Barcelona castellers have an excellent website with more information and details on events in English – you can visit their website here.

There are four spots left on GrapeHops tour to Catalonia in September 2015.  We hope to see some castellers, but you could always stay on and partake in the Fiesta of Santa Tecla.