Gubbio is one of the destinations for our 2012 Arts Sojourn in Umbria. My wife, Barbara and I first explored Gubbio on our own in 2007. We had wanted to visit Gubbio long before this, but somehow its off the beaten path location in northern Umbria necessitated us dropping it from our plans. Apparently many others have passed Gubbio by over the years as well, but its high and set apart situation has had some distinct benefits. Gubbio is said to be one of the best preserved medieval towns in all of northern Italy. The Italian way of preserving and honoring history is clear and evident throughout Gubbio. 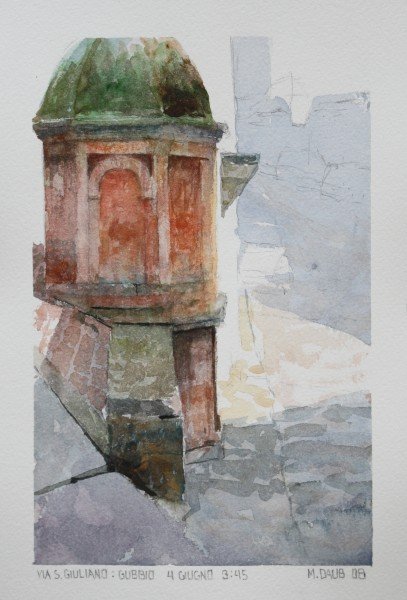 As Barbara and I walked along the via dei Consoli, one of the main streets rising through the upper town, we passed a public works sewer project. We noticed there were painstakingly excavated remains of what appeared to be foundation walls below the gaping void in the road surface. Stacked hewn stones of various sizes and configurations had been exposed in the cavity below the water and drain lines. A young woman, who turned out to be the project archeologist, was standing nearby. “Romano?” I asked, in reference to the unearthed stones. “No, medioevale” she replied. Workers were now in the process of carefully cleaning, documenting, and photographing each pile before they could be buried once again and capped with the rounded paving stones that would restore the road surface to its original pattern. The work appeared to be progressing slowly – very slowly. 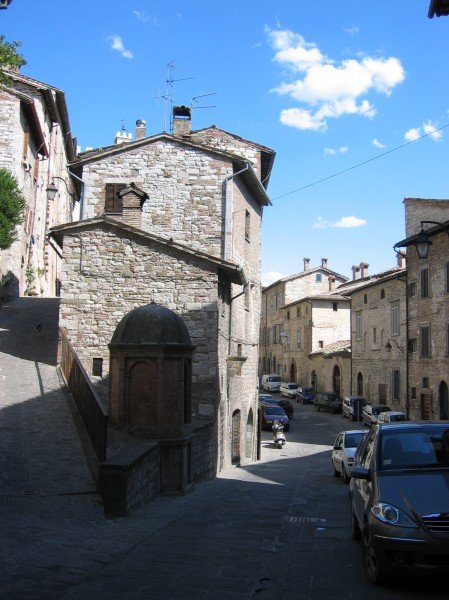 This is the sort of procedure that must be followed when any antiquity is discovered in any project in all of Italy, whether public or private. Work must stop; archeologists must study; plans must be drawn; every detail noted. History must be preserved and protected at all cost; even the history of medieval stones that will not be seen again until future sewer repairs are necessary. Is this the fastest and most efficient way to expedite construction? Of course not! It is the Italian way.