In winter, we spend time in the UK as well as France, it seemed this year whether ‘there’ or ‘here’ it was grey skies, rain and definitely on the chilly side. So we decided to go in search of some winter sunshine. We looked at Spain and Portugal – not doing particularly well, checked out Morocco. Essaouira on the western coast had a great weather forecast, sunshine all the way and about 23 degrees, so we booked and off we went. It’s a very different and quieter than the much better known town, Marrakech. 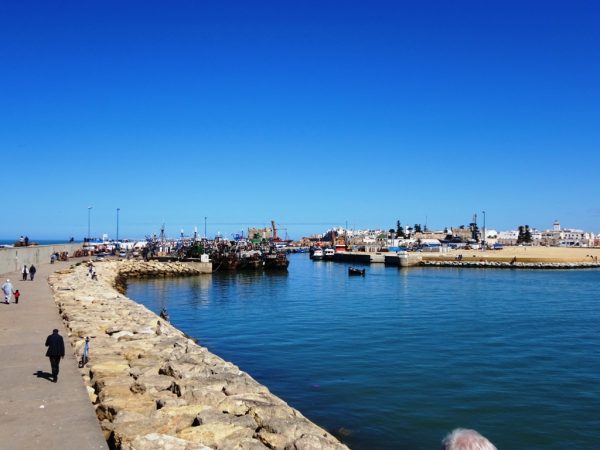 We travelled from London Luton in the UK direct to Essaouira. An easy transfer to our hotel and we had an enjoyable week, despite the weather that did not live up to the forecast! A walk along the beach, whatever the weather always has surprises – a combination of an exceptionally high tide and strong winds produced some ‘interesting’ results and always something to see. 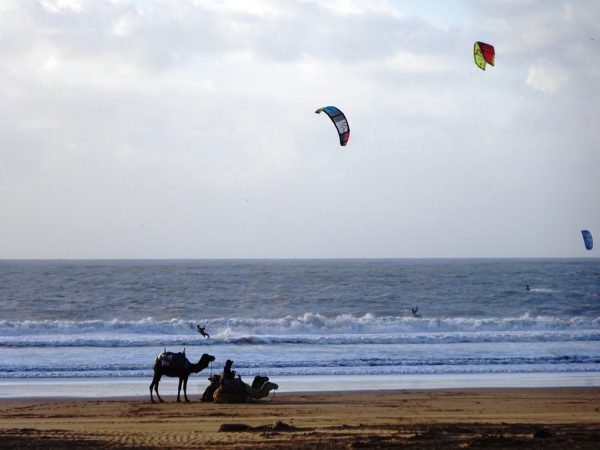 The Medina (walled town) is full of winding alleyways – and there’s always a café in which to catch your breath and watch the world go by for a while, including the colourful and musical street entertainers. 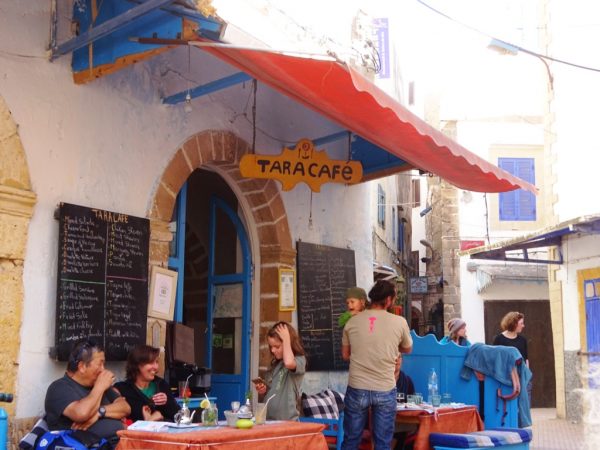 At the time of our travel, Britain was in the grip of the ‘Beast from the East’ as the snowy, cold weather snap had been dubbed by the press. We were glad to have escaped it! Airports were closed and flights disrupted and no doubt many travellers were affected. But it all seemed to have settled down by the date of our return flight so we were very surprised to receive an email from Easyjet on the morning we were due to return in the late afternoon saying our flight was cancelled! We weren’t told why until a couple of days later when the airline announced that it was due to “staff hours”. Surprising, but perhaps good news for us. Had it been due to bad weather, the airline may not have accepted responsibility for the delay, but at least this should enable us to recoup our expenses. 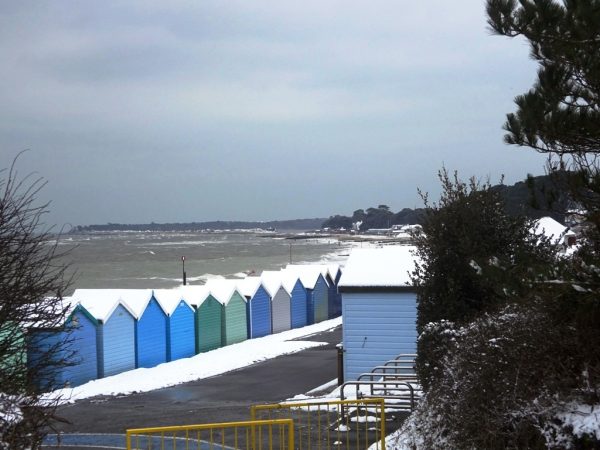 To cut a long story short, we flew back to UK 3 days later via Lyon in France! The alternative being to wait a complete week for the regular Saturday flight which would have caused us big problems (fortunately not involving our Tours which we don’t run in the winter – too many sites and restaurants are closed).

Not having been involved in a situation like this before, we then had to investigate where we stood regarding accommodation and subsistence for the extra days and whether any compensation was payable. Of course, we turned to the internet – and very interesting it was too. The first thing we found is that there are numerous companies who will offer calculators to estimate whether compensation is due and if so, how much. What is not apparent is the large commission they will take if a claim is made via them – 30% seems common!

One of the things it is necessary to know is the distance between the two airports – in our case London Luton and Essaouira in Morocco. We easily found the answer to that via the Flight Durations website – 1485 miles or 2390 kilometres.

The most useful site we found to check out the situation in the UK is MoneySavingExpert.com Founded by Martin Lewis, this is an extremely useful site, not just about flight delays, but all sorts of financial information and cost comparisons.

It gave us a concise summary of what we should be entitled to and even gives letter templates to submit to the airline – for absolutely no charge whatsoever!

This is only relevant to those travelling with a European Airline – perhaps one of our Slow Travel Tour colleagues would like to enlighten everyone about the situation for example, in the States?

Delays occur when travelling whatever time of year – winter obviously increases the chances, but despite the inconvenience of the delay and hassle trying to find and arrange another flight, we enjoyed our break on the wet and wild Essaouiran coast and would happily go back, but preferably not get stranded there!