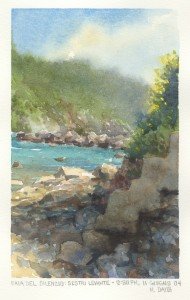 The stunning beauty of the Italian landscape is not only a celebration of nature. It is in no small part the result of man’s influence on the land; how man and nature have worked together in harmony over such a long period of time that what man has produced often appears to be a part of nature itself. The Italian landscape is like a heavily-worked oil painting in which the artist scrapes the surface of the canvas, uncovering previous layers of paint, then over-paints and adds glazes only to scrape again. Each new layer reveals a new image while a patina of the past always remains. The works of man are eventually engulfed by nature, but they are reclaimed to re-emerge in some new form. The result is a row of canopied trees that suddenly appears along a bleak section of autostrada, or terraced vineyards and houses carved into inaccessible cliffs that rise nearly vertically out of the sea, or the silver-green of an olive grove that now softens the rocky face above a working stone quarry. Individual examples of man’s impress on nature are everywhere and they combine to form the landscape that is contemporary Italy.
The same can be said of the architecture in Italy’s towns and cities where past and present intertwine and everything is permanent – used and reused – abandoned and preserved again. Columns of a pagan temple are recycled as columns in an early Christian church. A fragment of a Roman era lintel is embedded in a medieval wall and now appears next to a neon pharmacy sign in front of a bus stop. The foundations of a Roman house are uncovered in a renovation only to become an architectural feature in the breakfast room of a modern hotel. It is impossible to distinguish between new and old because old is new and still in use – the paradox of contemporary Italy!