This is Part Three of a three-part series on train travel in Italy. See the other two posts:

Part One: Understanding the Schedule

Your Journey By Train and Getting Off at the Right Stop

If you have followed my two previous blog posts you should now be able to successfully decipher the train schedule, purchase your tickets, and find and board the correct train. What can you expect after that? Generally, nothing! I have found most of the Italian train trips that I have taken to be uneventful and, at times, even boring. You may, or may not get to see the glorious scenery that you were expecting. For example, even along the beautiful Mediterranean coast near the Cinque Terre, the trains spend much of their time blasting through black tunnels, bursting out only momentarily for fleeting glimpses of turquoise sea. While some train rides may be inspiring most are just an efficient means of getting from one place to another.

There are exceptions however, including occasional delays due the weather and other unforeseen circumstances. Many years ago on the short trip between Lucca and Montecatini our train came to a sudden dead stop along the tracks in the middle of thick underbrush. The engineer and conductor exited the train and began walking back along the track. They were speaking very solemnly with each other and looking in the brush on either side. The passengers were all hanging their heads out the windows and no one seemed to know what was happening. After a long while the train started again and slowly made its way to the next station where the engineer again left the train and began talking on a call box just outside the car we were in. I heard him say the words, ragazzo, and motorino – a boy and a little motorbike. I was pretty sure that I understood what had happened and confirmed it with an Italian passenger who was also listening, but there was nothing about the incident in the newspapers the next day and no one we asked in Montecatini had heard of it, so perhaps it was just the closest of close calls.

Your trip will likely not be this dramatic, but try not to get so comfortable that you fall asleep, unless one of your traveling companions agrees to keep watch. We once had a group of four college girls with us who fell asleep on the train and ended up passing the stop they wanted, arriving at a somewhat distant station too late to get a return train. They split the cab fare back to our hotel, but were not happy. If you are traveling with any bags be sure to keep your eyes on them, that includes backpacks and purses. There are luggage bins at the ends of some train cars and some also have overhead racks, but you should not leave any bags unattended. There are bathrooms at the ends of the cars on many trains. Bring some tissues with you (Gee, thanks, Mom!).

The most important thing that you will need to know is when to get off the train. Most trains have working loud speakers that will announce the names of the stations as you arrive. Some of the newer trains also have TV monitors that display this and other information, but be certain to pay attention to the signs posted in each station. As the train approaches the station yard limit you will usually find a sign posted with the station’s name on it. The name will again appear on the station building itself. When I am riding on an unfamiliar route I like to know the names of the stations just preceding the one I want. You can find them listed on the paper schedule at the station before you board the train. Recognizing the preceding stations can be particularly helpful to prepare you for when to get off on certain routes. For example, the local trains that service the towns of the Cinque Terre stop at some stations in which the platforms extend into tunnels and some of the train car doors open within the tunnel itself. It is perfectly safe, but you may not be able to see the station sign in the dark of the tunnel. I have seen many travelers confused by this. It will be reassuring for you to know which station comes before the one you want.

Finally, when the train comes to a stop at your station you want to be prepared to exit, particularly if you have luggage with you. You can make your way to an area at the end of each car where the exit doors are. The doors will usually open on their own, but if they do not, just push the very obvious button that is near the door.

So I think that about covers this three-part primer on Italian train travel. With just a little practice you will feel almost as comfortable as the locals who commute by train every day. 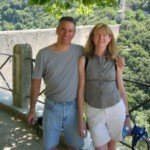 Matthew Daub is a professional artist and university professor with works in major public and private collections throughout the United States and Europe. He has been leading plein air painting workshops in Italy since 1994. In 1999, Matthew and his wife Barbara formed Arts Sojourn as “a vacation for artists and their friends.” The program is designed to appeal to artists of all levels as well as non-artists who enjoy the company of creative people in a slow travel format.

Slow Travel Tours is an affiliation of small-group tour operators who offer personalized trips in Italy, France and other European countries.