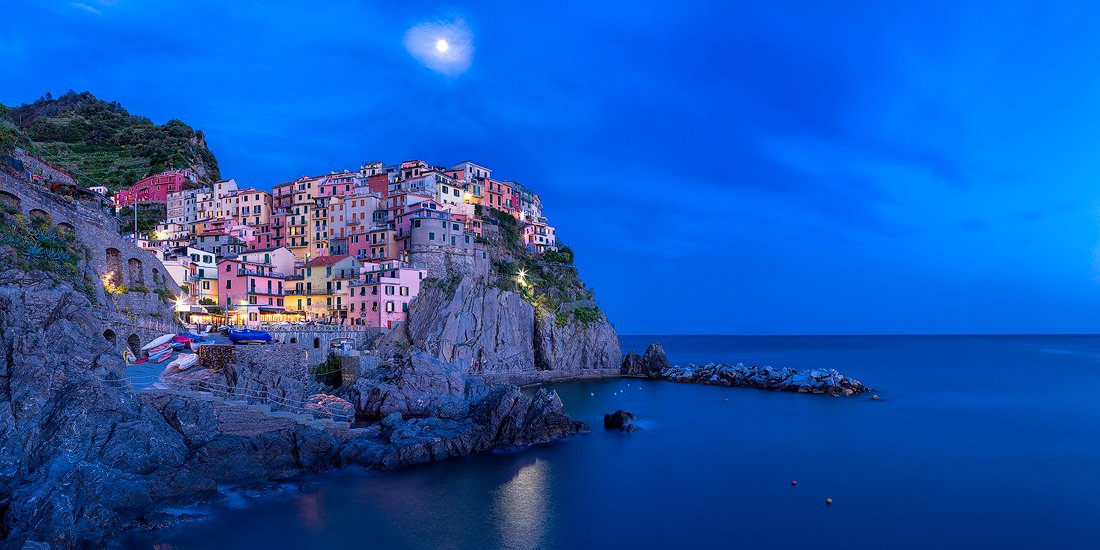 On our photography tours to Europe we always talk about how to expose digital photographs and how to understand and use the histogram, that funny little graph that shows up on your camera LCD when previewing photos that you have already shot. You usually have to toggle the info. button to get to the histogram if your camera has a histogram feature.

This is what a histogram looks like and it is one of the greatest tools in digital photography for getting better exposures (proper). 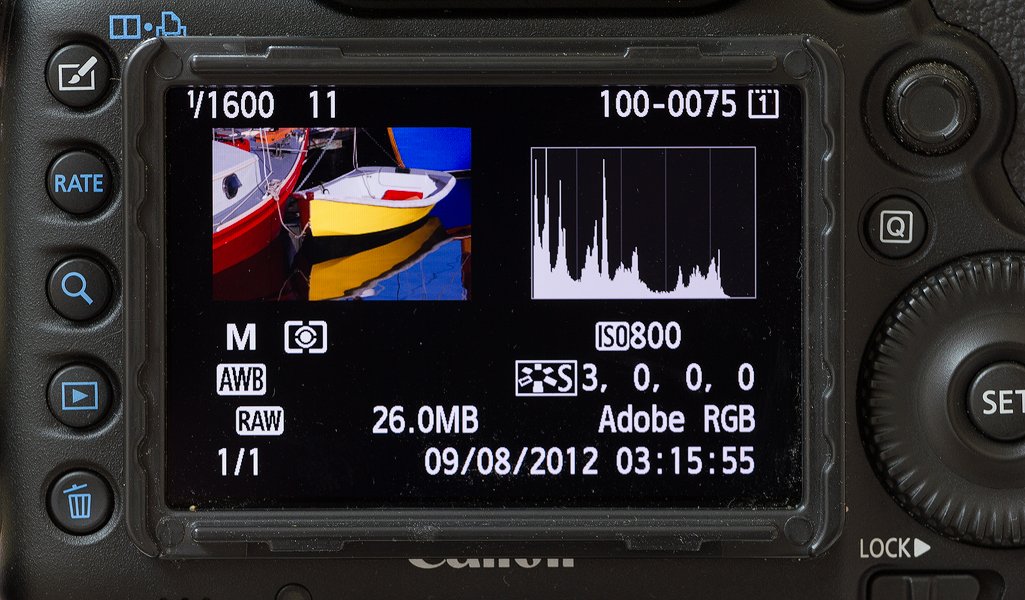 The histogram will also show up when you open up the photo in a software program such as photoshop. 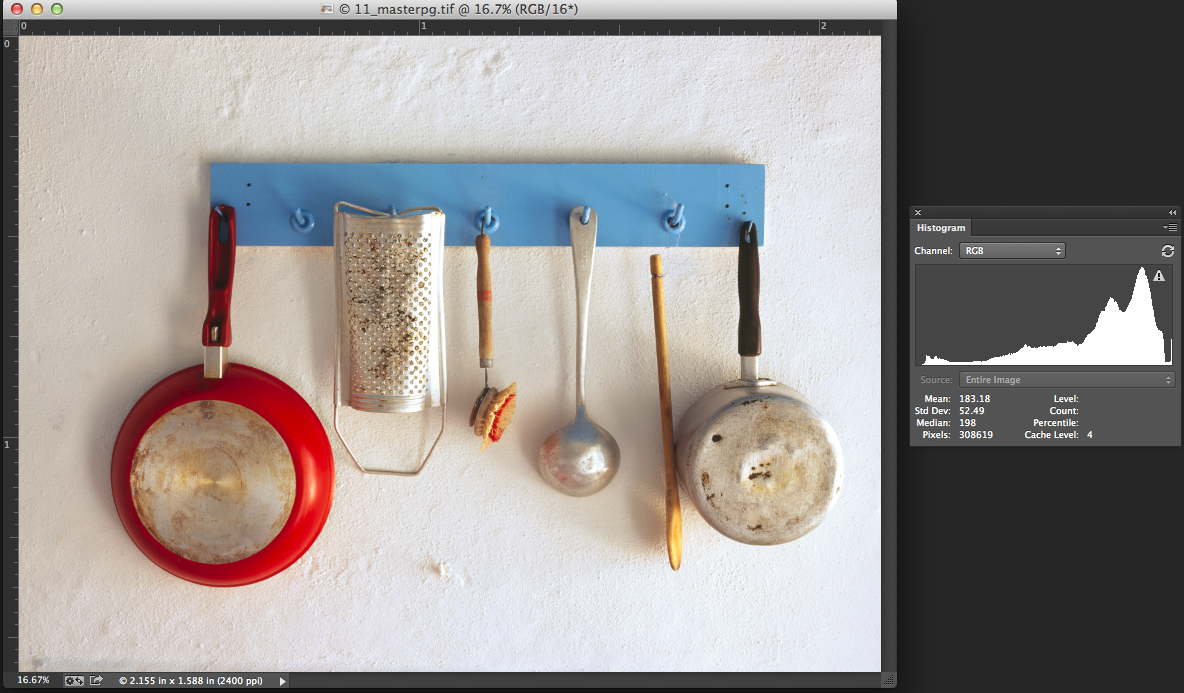 So what does this little graph tells us? Basically a histogram tells us the tonal range in the photo and shows how much range of a given tone exists. The horizontal axis of the graph reads from zero on the left, representing pure black to 255 on the right, representing pure white. The vertical axis tells us the number of pixels for different levels of brightness. The photo above is a pretty low contrast scene with most of the tonal detail toward the right side of the graph representing lighter tones. It has a bit of information to the far left which would represent the black, dark handle on the pot to the far right. 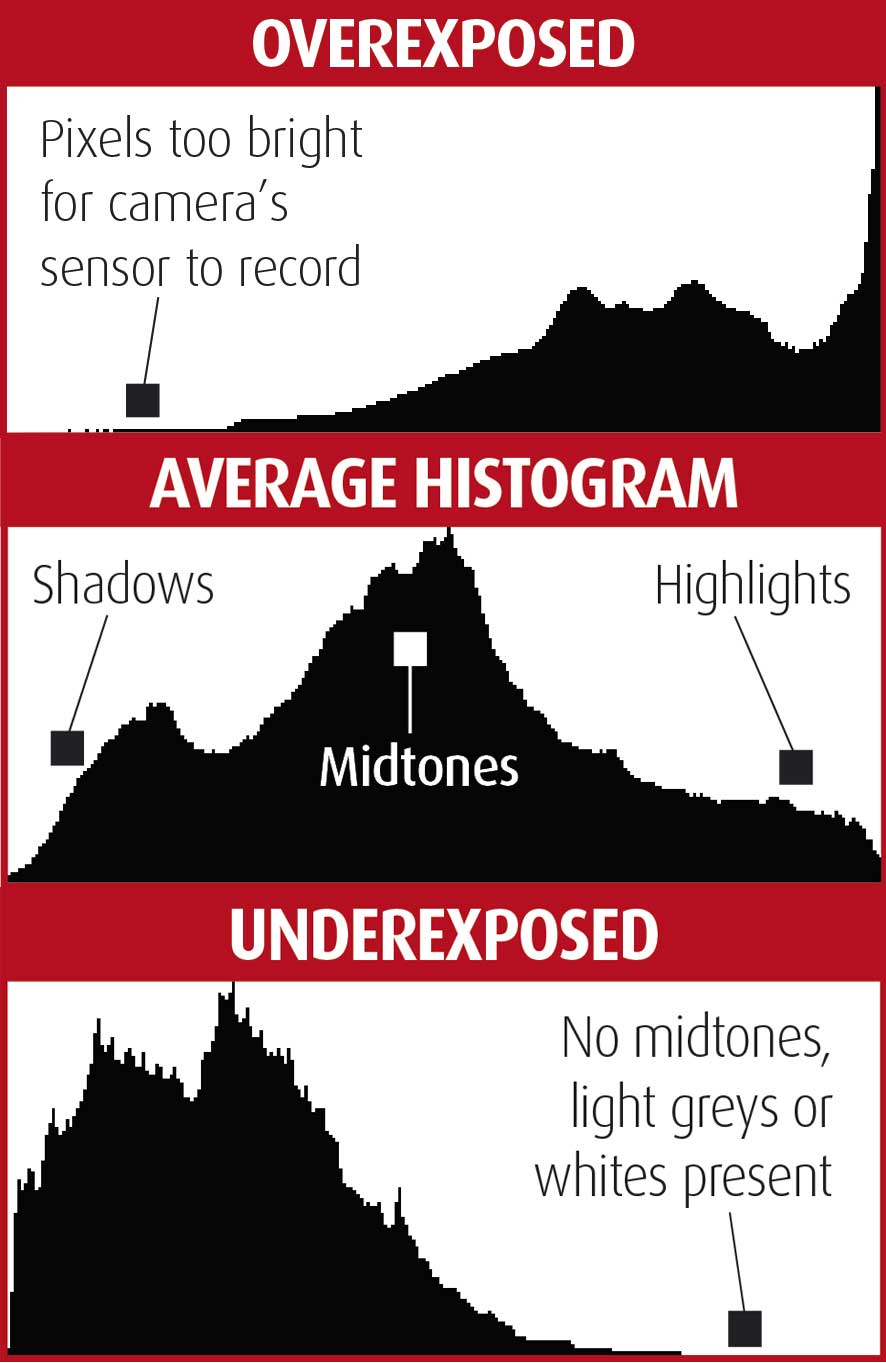 Okay, so what? How does this benefit us? When exposing photos we want to first of all make sure that all the brighter areas are contained within the right side of the graph. You don’t want to see a graph with data bumping up against the right side of the graph like the top example above (OVEREXPOSED). This would represent an over-exposed photo and those areas that are over-exposed would show no detail at all. Very unsightly if you are trying to produce quality photos that you may want to make some nice prints of. The photo below shows that it has been over-exposed to a degree that there is no detail in some of the lighter areas. We want to avoid this and it is easy to do so. If you see this on your LCD on the back of your camera, reduce your exposure until all the lighter areas show up within the confines of the graph. Either use a faster shutter speed or a smaller aperture, or both. 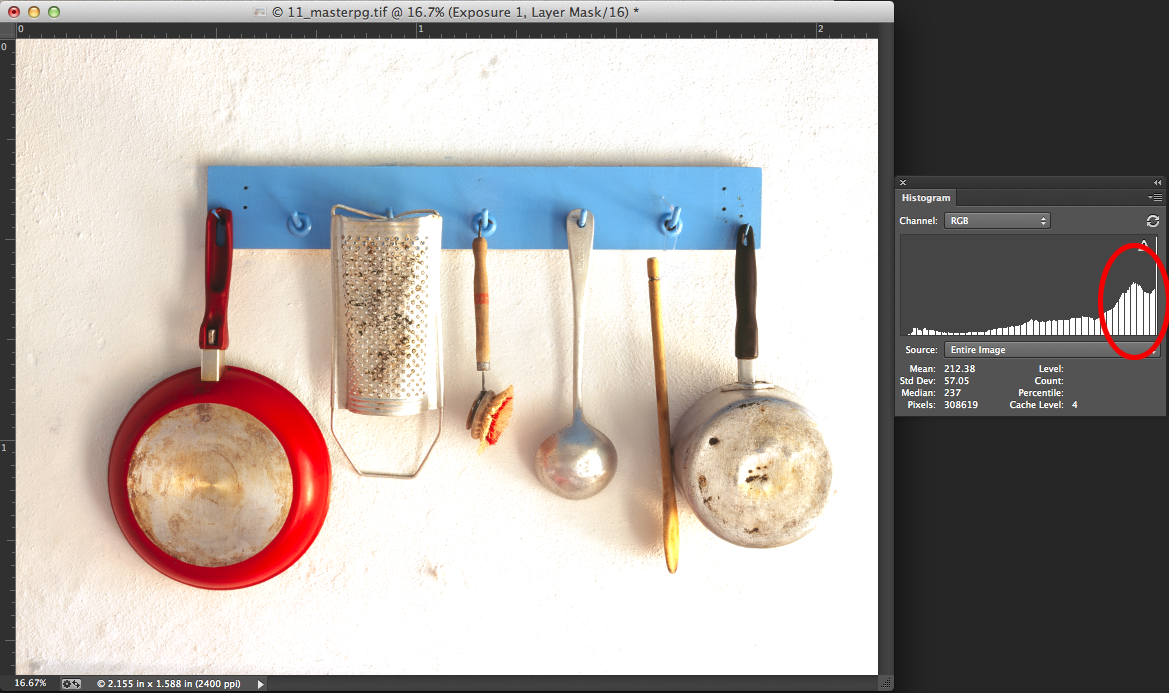 You can also use the other side of the histogram to see where your dark tones fall on the graph. This is not as important as the lighter/right side of the graph but can be useful for judging better exposure. If some of the information is bumping up against the left wall as it is in the photo below, it does not mean that it is a bad thing. This image has a lot of black area without detail that I like. I don’t want to see detail in the dark areas of the water. 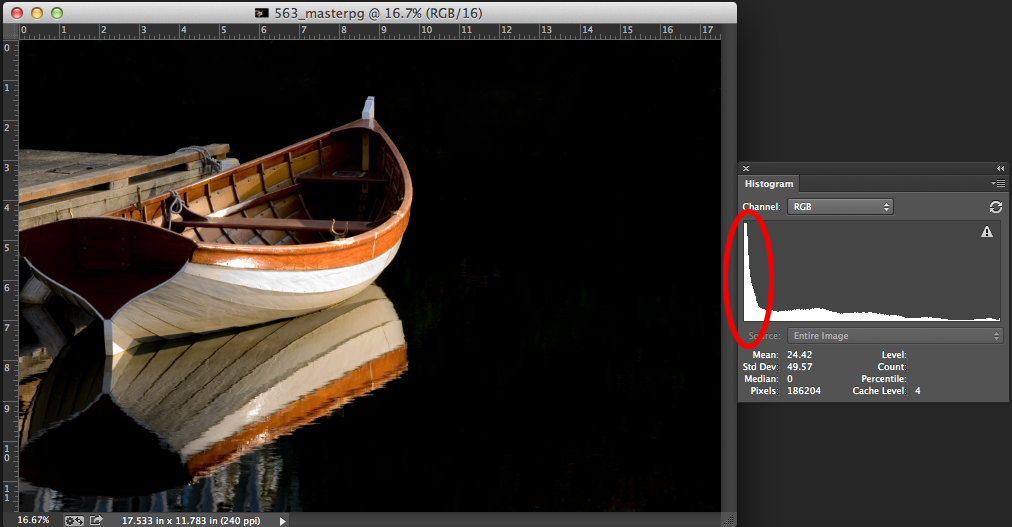 One of the biggest benefits of using the histogram to see where the darker tones are falling on the graph is when you are photographing generally dark scenes such as the time just after sunset. The problem with a photograph that has been under-exposed is that you run the risk of unsightly digital noise in the darker areas of the image.

This is really evident if you enlarge the photo to 100% in post-processing software. You may not be able to see the digital noise in the blue sky of this photo, but it is there. This example represents a challenge that we run into at times with high contrast scenes such as this. 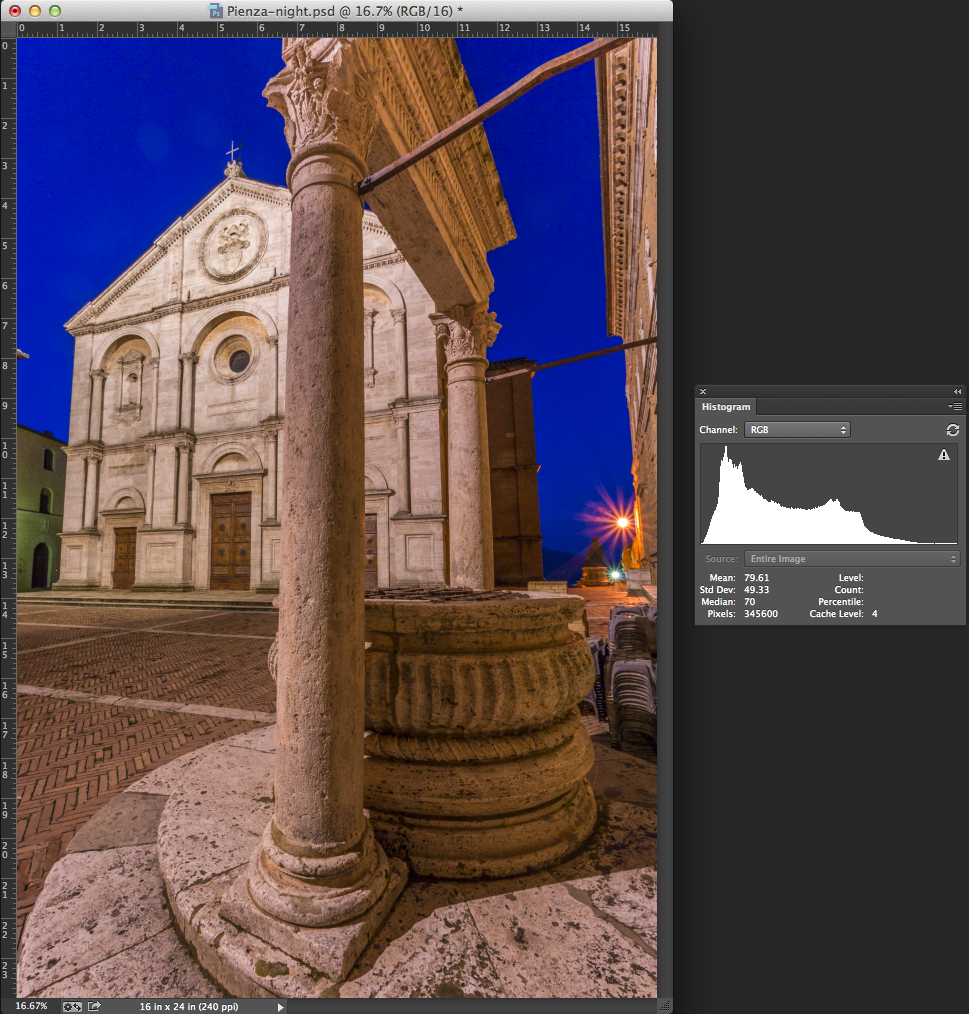 Check out the digital noise in this section of the photo that has been enlarged to 400% so that you can see it. 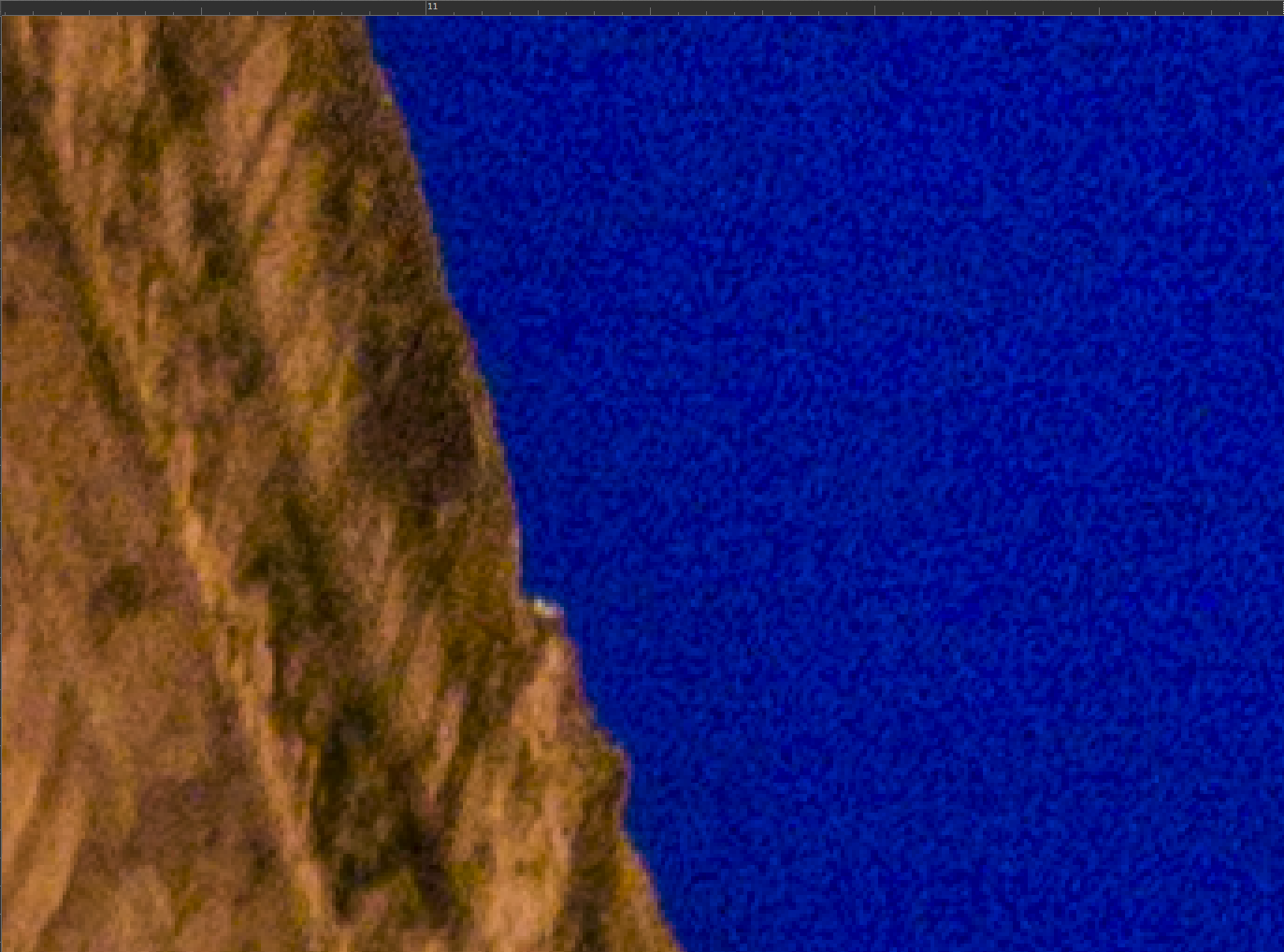 The way to avoid this unsightly digital noise is to add exposure to your photos, longer shutter speed and/or wider aperture, without over-exposing the bright areas where you want detail. Then when you open up the photo in post processing software, you can bring the exposure down to the desired level and you will greatly reduce the chance of digital noise in those darker areas.

Here is an example of the image with more exposure that I would then adjust darker in post processing. You an see that there is some information on the far right of the histogram that is bumping up against the right side. That represents the bright street light in the photo and I never worry about trying to maintain detail in those areas. 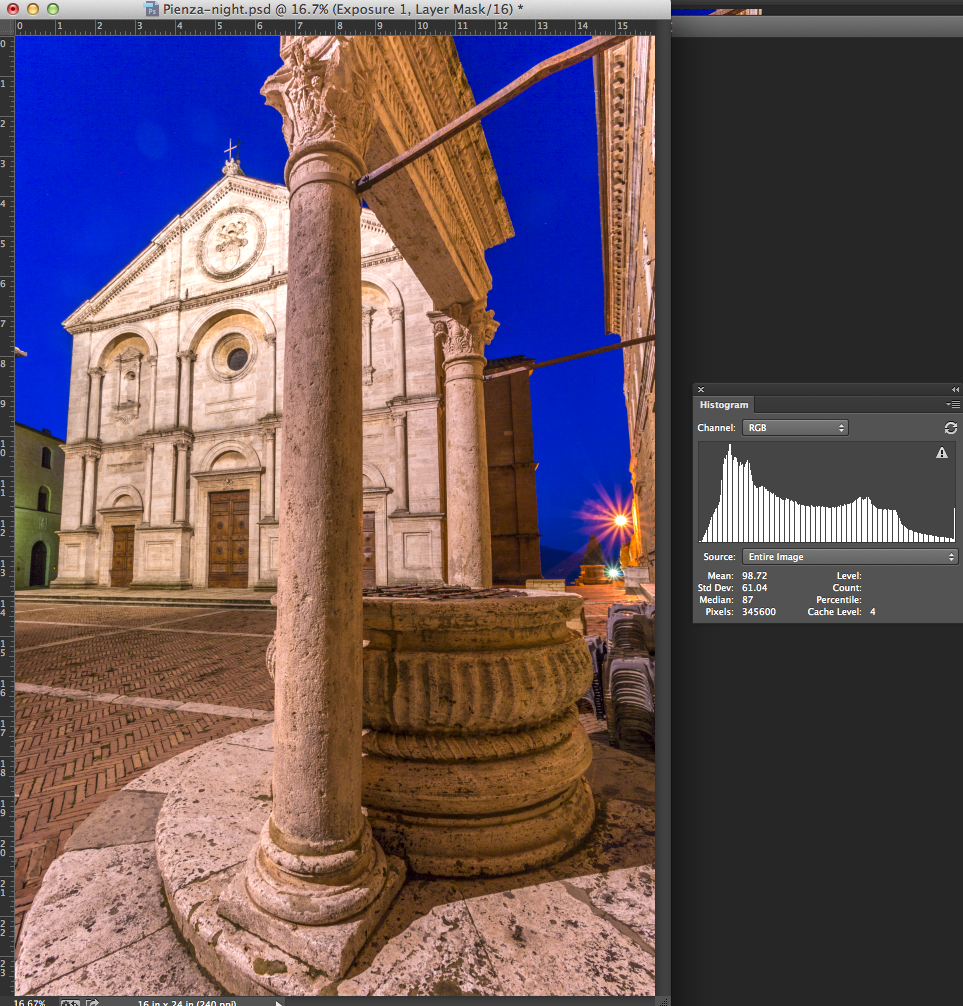 So using the histogram on the back of your camera will insure that you avoid overexposing your photographic masterpieces. It can also be used as a tool to give the dark areas in your photos more exposure, that is to expose so that more of the information on the graph moves to the right without overexposing the light areas.  You may then need to reduce the exposure (darken) in post processing to your liking. This will help to reduce or avoid unsightly noise in the dark areas.

If you would like to join us on a 2015  Photography Tour, check us out. Thanks.