Fortunately we were in the right place at the right time!  So often it doesn’t work out that 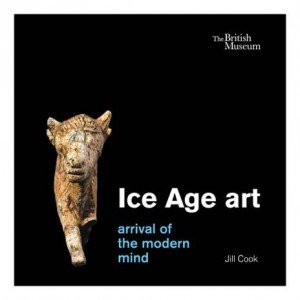 way – but our visit back to England to visit family and friends during our quiet season, coincided with the British Museum’s new major exhibition of Ice Age Art.

The exhibition not only includes items from the Vezere Valley, but many other places too and it is a wonderful opportunity to see objects that otherwise you would have to travel far and wide to see. It did seem a bit bizarre seeing items that we would feel more at home seeing in the Dordogne in a London Museum!

According to Jill Cook, Senior Curator of the Palaeolithic and Mesolithic collections, this is the first exhibition at the British Museum (BM) of Ice Age art – it’s been 40,000 years in the making. This is somewhat surprising because 100 or so years ago the BM was regularly buying some of the artefacts being excavated in South West France, including a flute (sadly now lost somewhere in their miles of shelving) from Castel Merle (just down the road from us).

However, this is not to take anything away from this exhibition which was well worth the trip. Jill Cook has assembled some of the ‘crown jewels’ of Ice Age art. As well as France and in particularly the National  Archaeology Museum at St Germain-en-Laye, Ulm (Germany) and Brno (Czech Republic) museums have been notably generous.

A further dimension is added by the inclusion of works by Henry Moore, Henri Matisse and photographs of Picasso’s studio which show pictures of the Lespugue Venus being studied for inspiration. 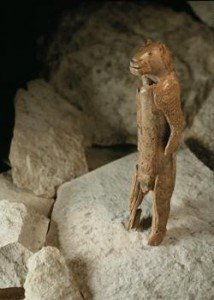 favourites are the Lion Man and the Vogelherd Horse both from South-western Germany and 32,000 years old. The Lion Man is 32 (or so) centimetres high and is the oldest piece of free-standing figurative sculpture in the world. Discovered before the Second World War in a thousand pieces, it took nearly half a century to reassemble. An absolute treasure, it combines a lion’s head with a human (really quite male) body. Already our ancestors were deeply involved in ritual myth and metaphor even to think of such a complex figure.  Then stop for a moment to wonder at the technical and aesthetic skill needed to carry out the carving. What would be your feelings/thoughts be if you encountered this figure, deep in a cave, with smoke, chanting, flickering lights – wonder, fear awe? Would you think it was from another world? 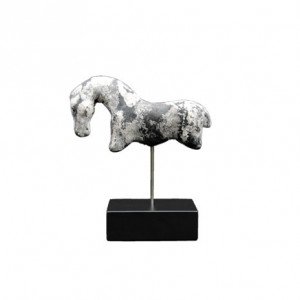 The Vogelherd Horse to me is the epitome of ‘horse-ness’.  This little carving, meant to be hung around someone’s neck, is wonderfully executed. Even though it is only a few centimetres long, with no legs, this masterpiece generates immense power and grace. Every picture or statue of horses over the last 32,000 years, in some way, owes a lot to this figure – imagine the original in real life flying across the Danube plain and our ancestor getting their brain around making a copy of the ‘horse’ – was it speed, strength, grace that made the horse so special?

Brno Museum has contributed items from Dolni Vestonice. This mid-20,000 years old site in the Czech Republic was used by groups of mammoth hunters. From here have come the rarest of Ice Age art objects – ceramic figures. But wait a moment, wasn’t it another 15,000 years or so before ceramics were invented? Research has recently argued that these clay figures were intended to be burnt, to be destroyed by fire, not preserved as is normal with ceramics. Dolni Vestonice has also given us the earliest evidence of textiles or basketry – the imprint of woven threads – surviving in clay.

This ‘motif’ of this exhibition is to demonstrate that the minds which created these objects in all their diversity and inventiveness were thoroughly ‘modern’, totally capable of highly sophisticated thought and expression. It makes the point that art, creativity and the aesthetic, symbolic dimension is utterly part of being human and has been for a very long time.

On a practical note, the exhibition is well laid out and numbers controlled so it is not overcrowded.  Booking is definitely advisable and slots are filling up fast.

The exhibition runs until 26th May so you have time – follow this link to find out more. (Photographs courtesy of British Museum)