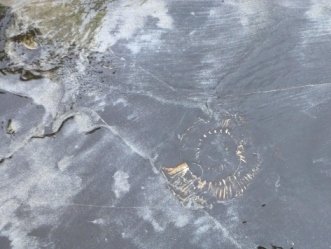 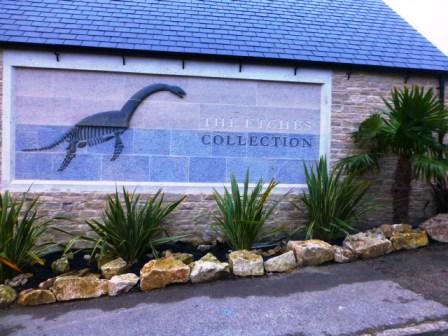 Our interest in the Steve Etches Museum goes back to February 2015 when a very good friend invited us to a talk at Wareham Archaeology Society. The speaker was Steve Etches who captivated us with images of finds he had made over many, many years on Kimmeridge beach. 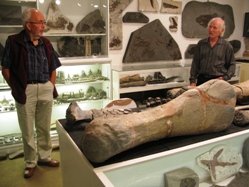 At the time, the home of Steve’s vast collection was his garage – this makes it sound like a very amateur-ish affair, but when we were privileged to visit there a month after his talk, we were astounded.  The quality of the presentation of the various treasures Steve had found over the years was incredible. This was the first we knew of an exciting project to house Steve’s collection in a dedicated Museum and we have tracked its progress ever since.  It opened in October 2016 and again we felt very privileged to be there as this project came to fruition and opened its doors to the public.  When we realised that we could book a bay tour with Steve Etches, this was a ‘no-brainer’ as they say!

The 26th February was a truly memorable day – the type that you find yourself saying “do you remember when…..”   Along with several of our special friends, we headed to Kimmeridge Bay where Steve has made so many amazing finds over the years.

When (Caves & Castles) Steve takes our visitors around the Vezere Valley, to sites such as Lascaux 2 or Lascaux 4, he takes them back about 30 – 40,000 years.  With Steve Etches it is 160 million years ago! 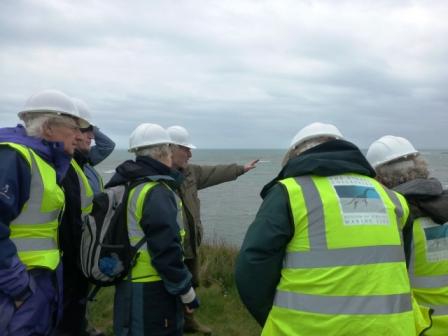 Steve gives us an overview from the top of the cliffs, before we descend into Kimmeridge Bay

Having gone through the safety routine at the Museum, we set off with Steve and his assistant, Rebecca for the bay.  We can’t say it was a warm blue sky day, it was a bit on the wild side, but nothing was going to dampen everyone’s enthusiasm.  The tour had been planned at low tide so we could get to the most interesting parts of the shore – we were literally walking where dinosaurs had been.  It seemed like every slab of rock, every pool was known to Steve. Most of us had visited Kimmeridge before, but with Steve there, so many treasures were revealed that we just would not have seen, nor recognised. 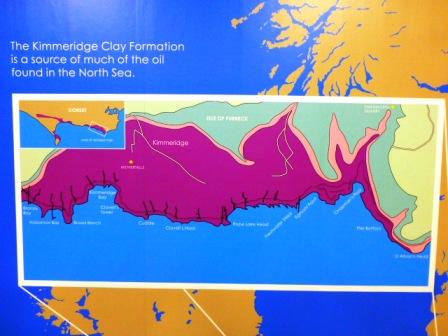 Kimmeridge is on the south coast of England, between Weymouth and Wareham, Dorset. Part of an area known as the Jurassic Coast

Kimmeridge Bay is part of the Jurassic coast of southern Dorset, England.  If we travel back in time, historically sea levels changed and where dinosaurs had walked, the land became submerged under 200 feet of water and became the final resting place of pleisiosaurs and ichthyosaurs. It is these fossilised remains that are found today. 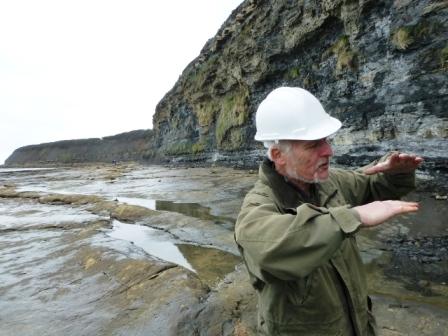 The cliffs at Kimmeridge are spectacular and fossils are heavily compressed within the rock. To find them you need very sharp eyes and amazing dedication – such as Steve Etches has.   He is out in all weathers – after a storm is particularly lucrative for fossil hunters.  At times he runs the gauntlet of the incoming tide when urgently working to retrieve a newly exposed buried specimen before it can be whisked away by the sea.  Having freed perhaps a huge fossil-bearing piece of stone, he then has the problem of getting it back to his workshop – previously at his home, now at the newly opened Museum. Some pieces are so large, that reinforcements have to be called in – often Steve’s long suffering family!  His wife and children deserve a lot of credit along with Steve and much would have been lost without their assistance (but they keep a low profile!).  Steve has made many discoveries of new species – not by luck, but through his extraordinary dedication. 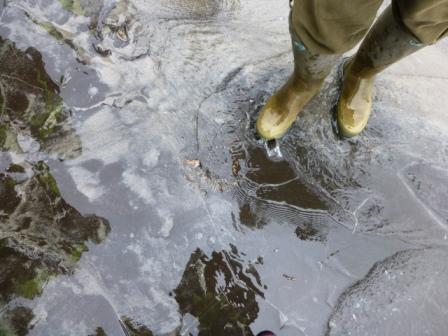 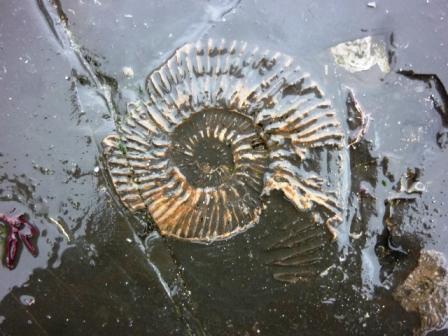 After lunch, our next treat was a personal tour of the Museum itself again with Steve.  It all comes to life so much more when the hunter himself describes not only the find and the significance of it, but also relates tales of how he found items, how long he monitored a particular find before it became accessible, the difficulties he encountered.  The gallery contains the results of Steve’s painstaking collecting over 35 years – and the countless hours he spent cleaning and preparing the exhibits for display. Using dental probes and compressed air abrasives, it would often take months to fully expose some fossils. 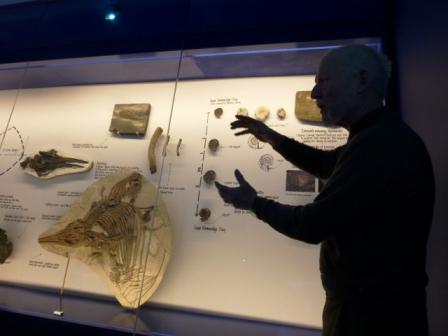 We saw more pterosaurs and plesiosaurs – utterly fearsome ancestors of modern dolphins – in an afternoon than the world-famous Natural History Museum in Kensington, West London possesses! 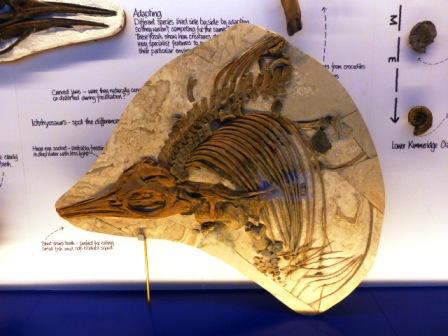 The remains of the juvenile ichthyosaur – including its lunch!

A young adult ichthyosaur had enjoyed a really good fish lunch and was happily swimming around having a ‘pause digestive’ as the French would say, then wallop! – it was cut in half by a real monster – maybe a plesiosaur, the largest marine reptile with teeth up to 16 cms long.  What was left of the ichthyosaur, including its yet to be digested lunch, fell to the muddy bottom of the sea.  It was covered in silts and fossilised and to eventually be found by Steve Etches millions of years later. This truly amazing specimen including even skin, took 10 months work in the laboratory and workshop to clean and reveal its story.

Ammonites really get Steve Etches going!  There are about 8000 different species and at Kimmeridge he has discovered – twice – the only ammonite eggs yet known. Incredible.And, if that were not enough, he filled in a gap in Darwin’s record.  During the voyage of ‘The Beagle’ he discovered a new type of barnacle growing in the Sea of Japan.  He surmised these had evolved from very ancient times – et voila – 160 million year old examples were found by Steve at Kimmeridge thus proving Darwin’s hunch was indeed spot on!  What an achievement and further proof of this amazing man’s dedication. 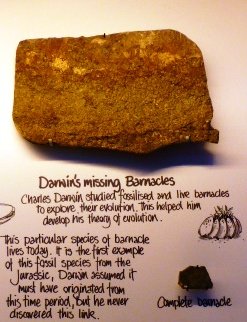 Kimmeridge is only a tiny place between Wareham and Weymouth, Dorset, but it is well worth a diversion to see this fascinating, world beating collection of fossils from an area and period that has been largely overlooked by geologists in the past.  The area was not really recognised as being significant – except by one man, Steve Etches. How fortunate we are that he persevered for so long – and is now so generous with his time and knowledge.  Thank you Steve.

To find out more visit the Museum’s website  or contact Rachel Harris (rachael.harris@theetchescollection.org) to book yourselves a Bay Tour with Steve Etches.