I would like to look at what makes a population ‘nice’.  It is possible to construe this in two ways – either how does a population develop so that it ends up as ‘nice’, or what is it that we see in a population that makes us feel that it is ‘nice’.  Perhaps we can touch on both of these meanings.

For travellers in general, it makes a big difference to be travelling among a ‘nice’ population;  if you are taking part in any form of slow travel it is particularly important to be among ‘nice’ people because of the far greater contact you have with the local population.  If you are confronted by rudeness and aggression all the time, you will be unlikely to enjoy your travel.  If on the other hand you find yourself among people who go out of their way to be helpful to travellers, with a smile and a joke, you will have a lasting and positive memory of the place in which you travelled.  There are some well-known ‘nice’ people – for example without being too prejudiced I would say that the Scots and the Irish are well-known for being welcoming. 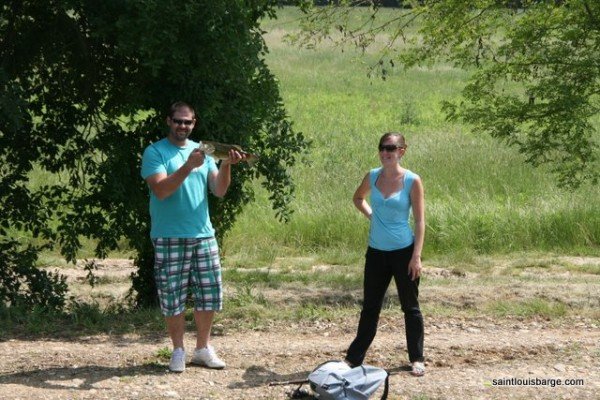 What have we experienced here in Aquitaine and Gascony, so that we feel we can assert that the people of south west France are particularly welcoming and easy to get on with?  Bear in mind that we operate a luxury hotel barge here in the Garonne valley, and every week we take our guests on a wide range of visits where on every occasion they meet local people.  This represents not just the occasional contact but frequent and repeated contacts during a number of years.  What we experience is the warmth of the people.

As we cruise gently down the canal, we have cheery waves from every direction.  People come out of their houses to wave to us, or they wave from their bicycles on the two path.  Better still, they call out compliments.  “C’est magnifique!”  “C’est superbe!”  “Bonne vacances!”  Quite frequently, when we are tied up in one of the little ports, we are approached by a youngster, perhaps a nine year old or perhaps a young chap of sixteen, who says for example “Monsieur, vous avez un trez beau bateau.” (You have a very beautiful boat, Sir).  Where else in the world do children express compliments like this, without fear of being teased and mocked by their school friends?

Equally, when we take guests to any of the places to visit here, whether it is an ancient abbey, a vineyard, a water lily nursery, a barrel maker, or a museum of the country trades of yesteryear, our guests always receive a big welcome, questions about where they come from and whether they are enjoying this part of France, and they always receive “A la prochaine!”  (Look forward to seeing you again!)

What has made the people here so welcoming and nice?  One can suggest a number of possible causes.  In the first place, there is really no established tourism in the area, so people have not been corrupted by tourism.  This is compounded by the fact that it is essentially a rural economy and lifestyle.  Traditional ways of life are still followed, and the extended family system is still found.  Perhaps this gives folk a contentment that is difficult to find elsewhere.

There are other pointers.  The passion in this area for rugby football helps to develop sturdy attitudes and friendly relationships  (rugby crowds are known for being well-behaved, respectful, friendly and humorous).  The local Occitane Dancing is unique to this part of the world, but it does contain a large influence of traditional music and dance from both Scotland and Ireland, so perhaps the awareness of cultural roots is important.  Since we are mentioning elements belonging to history, we should include mention of the Hundred Years War (which actually lasted for 116 years).  Could it be that the reason this war lasted so long was because the people were so nice?  Both sides in the conflict concentrated more on lifestyle than on warfare.  The enjoyment of wonderful food, superb wine, and happy women took precedent over the concept of ‘winning the war’.

Now, the occasional visitors to this part of France will benefit from this relaxed cultural background reflected in the people, as much as they will enjoy the wonderful food and superb wine! 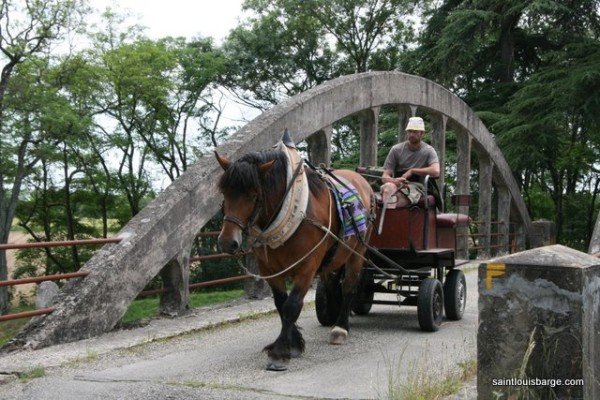 A horse and cart gently crossing a bridge over the canal