This is a question we are often asked by our visitors. It’s hard to answer – each cave is unique and special in its own way. And as for “which is your favourite piece of Ice Age wall art”? – that’s just as difficult to pin down!

To narrow it down, we’re going to concentrate on Lascaux, the world famous painted (and engraved) cave system in the Vezere Valley, dubbed the “Cradle of Mankind” by the French. More specifically – Lascaux 4 – let’s take a ‘walk’ through: 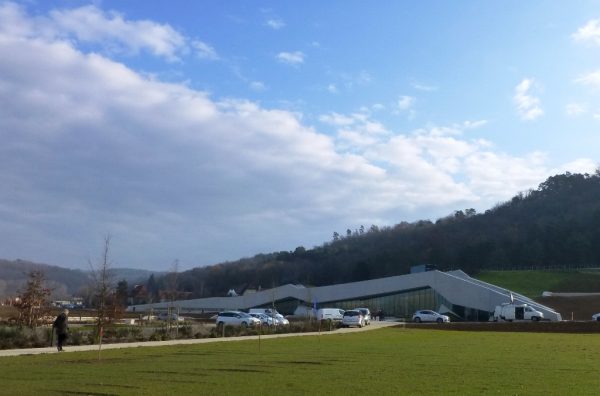 Having passed through the Hall of the Bulls, you leave behind the huge aurochsen, the deer and the horses, whirling around above your head. You then pass into the Axial Diverticule, and can pay your respects to the ‘braying stag’ whose eye follows you around the cave. Leave the three red cows, orbiting the ‘Sistine Chapel of Prehistory ‘ – as Abbe Breuil described it. 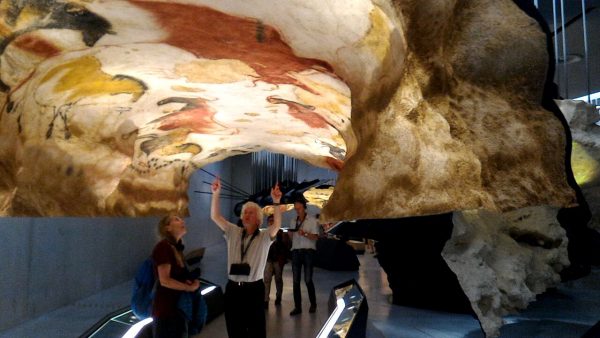 Turn your back on the Chinese Horse. 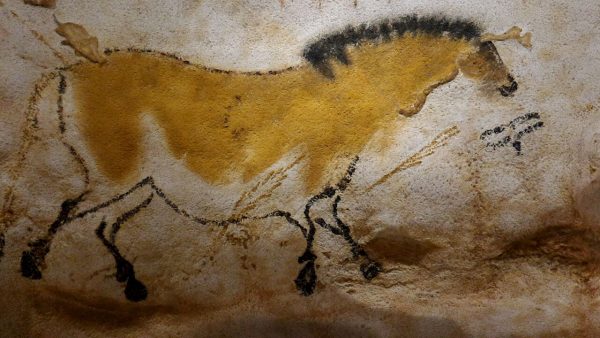 Now stand still and look up to your left and also towards the bottom of the cave. On the left you will see the panel of the Large Black Bull, lying over the three yellow bulls and hiding a red cow. To the right of this confused scene is one of the masterpieces of cave art – the Galloping Horse. The artist accepted the physical restrictions of this panel, to produce one of the most imposing figures of cave art.

Stand about 3 metres uphill from this picture. The horse seems to burst out from the rock at full gallop. The artist uses a natural fold as a baseline and embraces the hollows and bumps of the panel which help with the three-dimensionality of the horse’s body – its muscles appear to writhe out from the rock, an effect strengthened by the mixing of red and black pigment. The artists’ technical control and mastery is well seen in the way the eye is drawn – even though the colouration is very dense it shows out, represented by 2 lightly painted and opposed arcs.

The artist positively embraced the constraints of this panel to paint a figure absolutely alive, capturing the essential being of a horse.

A few metres away, across the vertical hollow at the end of the cave and, in spite of (or because of) the tormented shapes of the wall, is an even greater masterpiece – the Falling Horse. This is an awesome picture by one of the most gifted artists of prehistory or any other period, at the absolute top of his – or her – form. If, as is often argued, the Falling and the Galloping Horses have been painted by the same artist at much the same time, they show extraordinary technical abilities, welcoming the difficulties of the natural framework to produce something that epitomises ‘horseness’.

As you approach from the Axial Gallery, you can only see the forequarters, when you go round the rock column on which the Falling Horse is painted, you can only see the hindquarters. At no point can you or the artist see the whole picture. Only in the artist’s mind is the complete animal present, in total proportion, scale etc. A phenomenal tour-de-force, an extraordinary display of artistic imagination and technical virtuosity. It’s boggling.

The colouration of the Falling Horse has also been done with very great care. For example, there are no gaps in the yellow ochre of the body – several coats of pigment have been sprayed from different directions to give a uniform coating of the lumps and bumps of the cave wall. Black (manganese dioxide) was sprayed for the hooves and mane. The ears and the line of the back were also picked out in black – by careful brushwork. 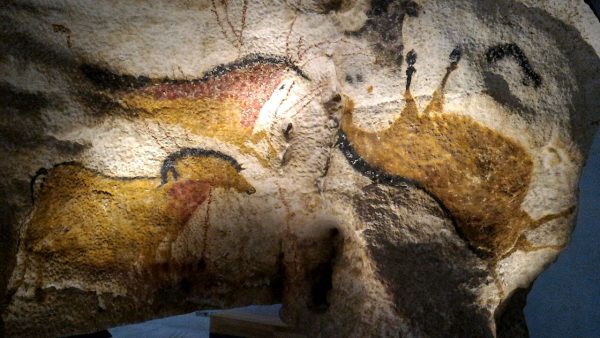 Something else for your struggling brain to try and grasp. These two masterpieces – among the greatest live horse pictures ever – were painted by the same genius down at the bottom of a dark, pokey, damp cave, lit only by flickering cave lamps. Try it with a few tea-lights in the cupboard under the stairs at home! This pair of paintings utterly encapsulates the soul of a horse – speed, power and grace. How typically Lascaux – a composition that operates in your brain on so many very different levels and in so many different ways.

But perhaps you’re asking “well, which is your favourite piece of wall art”? I think I would have to say it’s the ‘Falling Horse’ – I feel the fact that the artist could only see the whole image in his mind and not in reality and yet executed it so perfectly just tops the other extraordinary masterpieces, but it’s an arguable point.

Here’s a thought to ponder – “Which is your favourite piece if Ice Age Art?” – we’d love to know! And to those who haven’t yet visited, we hope you will bear these thoughts in mind when you do make the trip to this amazingly special region and let us know your thoughts at some time in the future! And, of course, we would be happy to introduce you to the stunning cave art of the Vezere Valley!