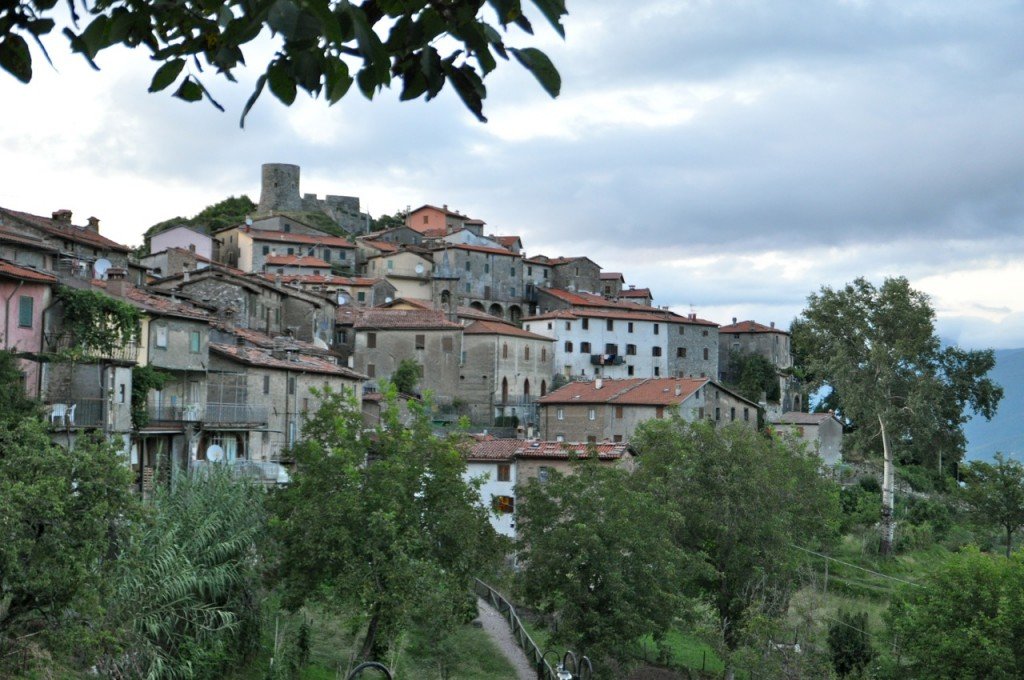 If you’ve been to the mountains of Italy, I bet you’ve asked this question yourself. You’re probably in a car on a road hugging a river and you’re craning your neck to look up at a terracotta-roofed village improbably balanced on an inaccessible ridge. To find the answer you have to abandon your car, get into your time-machine, key in ‘Middle Ages’ and click GO. With no discomfort on the way, you find yourself on a broad cobbled road nearly at the crest of the ridge looking down at that very spot in the valley you just vacated. You see the river running swiftly in the shadow of sheer rock walls that not even a mountain goat could scamper across. Your car is nowhere to be seen, because the road won’t be cut through the rock for several centuries. Your eyes follow the river to the left where it emerges from the gorge, still in the shade at noon, and disappears into a thicket of dense scrub on a river plain that floods in winter. You walk next to your mule laden with your jeans, T-shirts and iPod and in five minutes emerge into full sunshine at the ospedale next to the church in the village, where you are welcomed by a monk and offered a meal. As you tuck into your succulent boiled salt pork ribs, a large bowl of tasty chestnut-flour polenta and a skin of wine, you’re cooled by a soft mountain breeze that ripples through the golden farro in small terraced fields. A couple of enormous black pigs with pink belts around their middles wallow in a puddle formed by the spring that issues from higher up the mountain and provides clean cold drinking and washing water for the village. It must have been hard work creating the terraces, but the place is swarming with strapping young sons who look as if they’ve been down the gym pumping iron all morning, and it’s obvious time isn’t in short supply either. After lunch you’re not allowed to depart before having a snooze on a bed of hay in the inn, air-conditioned by the thick stone walls. 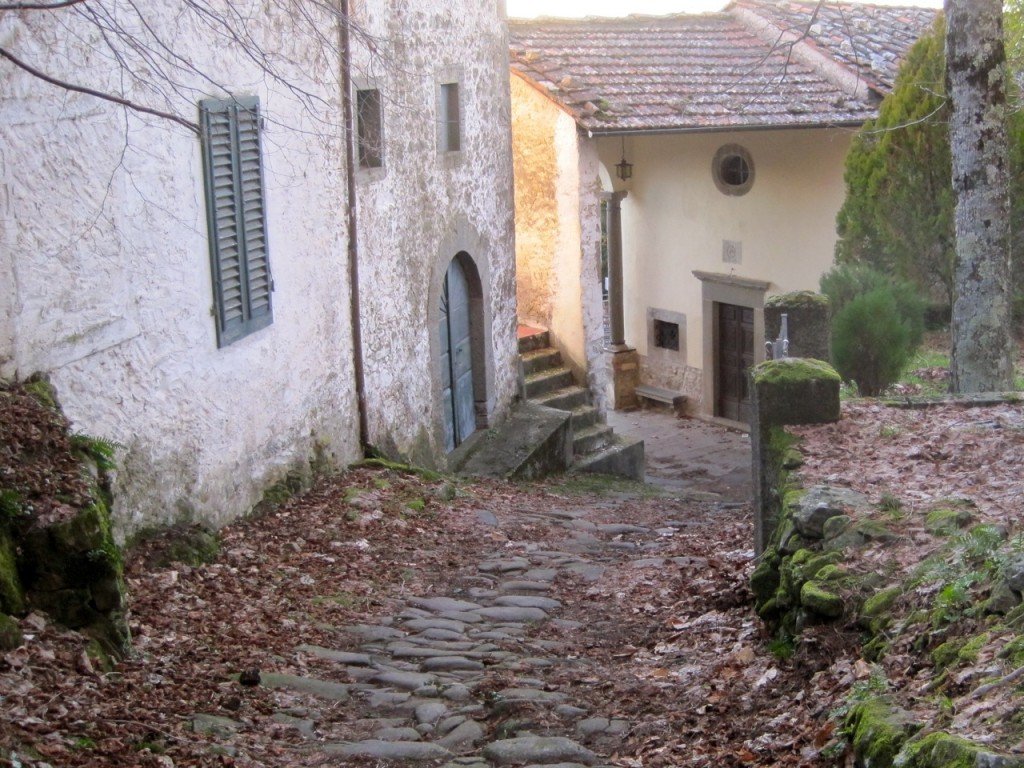 Arriving at the mediaeval village

Although you’ve signed up for a Slow Travel Tour, you still have to get to the next village by evening. A shepherd setting out with his flock offers to accompany you and show you the way, not that you need help to follow the broad, well-maintained mule track bordered by dry-stone walls. He’s been visiting his sister who married one of the men in this village, and his aunt and uncle live here too. There are many family connections between adjacent villages on this slope and those just over the top behind the village. It’s all so convenient living right on the main mule track; nothing is much more than an hour’s walk away. As you amble along, he tells you that the village you’re heading for lies just below a fort, part of the Republic of Lucca’s line of defense against the warmongering Florentine Republic. The ridge serves as an ideal lookout point, but the garrisoned troops are always drunk, and he’s sure those sheep that went missing provided Sunday lunch for the officers. Besides, he lowers his voice conspiratorially, he and a couple of other shepherds, who know the tops of the mountains like the eagles, had a good trade in contraband chestnut flour and firewood with the Florentine citizens just over the border. All at an end now, of course. After about 50 minutes, at a fork in the road, the shepherd bids you farewell as he continues up to his house in the summer pasture half an hour away and you saunter down the slope to the village bar just in time for a gin and tonic and a pizza margherita. Oops! You must have accidentally hit the ESC key on the time machine. You can tell because they didn’t have tomatoes in mediaeval times, and there are those telltale electric fairy-lights in the bar garden. Oh well, now that you’re back, let’s do the return trip as a 21st-century hiker. 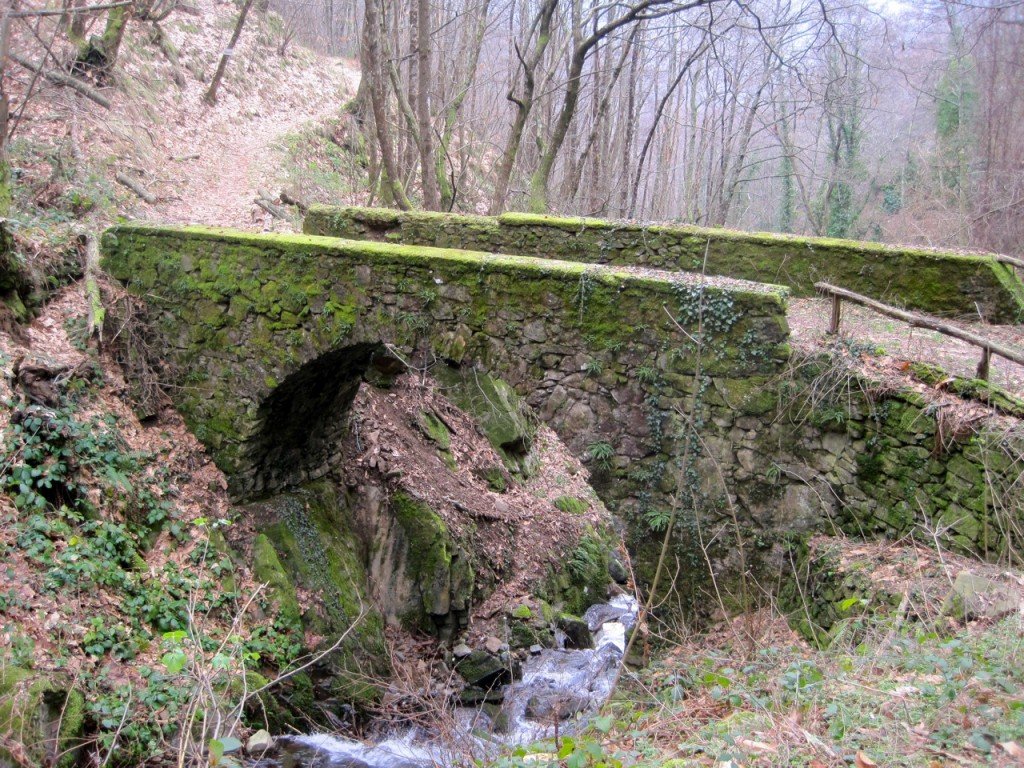 Bridge along a mule track

The mule track, being inaccessible even by a Fiat Panda 4×4, has become overgrown, many of the cobbles have washed out and in places no trace is left. No matter. You shoulder your rucksack and set off down the tarmac road to the valley bottom, which takes 45 minutes. Turn left and walk along the state highway cut into the sides of the valley or raised above the boggy valley bottom. The sun finally got here at about 12.30 pm, the tarmac is still blazing hot and there’s no cooling mountain breeze down here. An hour later you arrive at a village in the valley bottom, built mostly since the 1950s to be near the factories that exploit the river water. Turn left and for another hour and a quarter climb steadily following the interminable switchbacks of the car road, built in the late ‘50s, to arrive after a grand total of 3 hours back where you had lunch. QED. Where did that mule go? 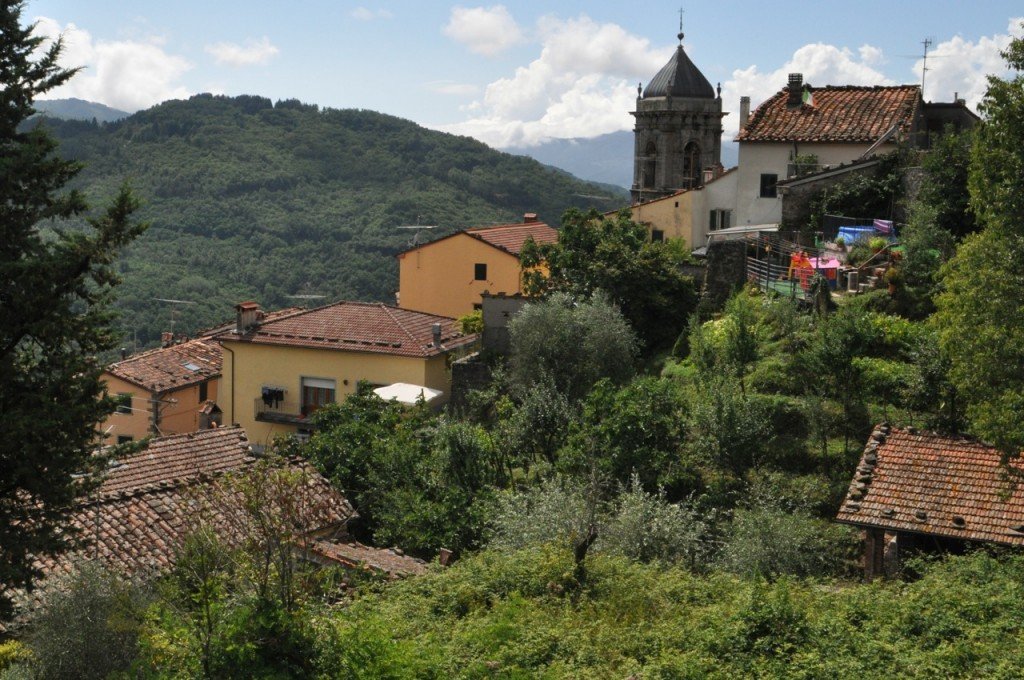