October 12 is a national holiday all over Spain, but in Zaragoza it is especially important, as it is the main day of the city’s incredible Fiestas del Pilar. The fiesta starts the weekend before October 12, and usually runs until the Sunday after.

Zaragoza is the fifth largest city in Spain and is the capital of Aragon. Yet it is not generally on the itinerary of many travelers coming to Spain, which is a shame. Zaragoza is right in between Madrid and Barcelona on the high-speed AVE train and would be an excellent stopping point to get a glimpse of what is a beautiful and historic city with many sights and excellent food.

The Ebro river winds its way through the city. One side is flanked by the massive Cathedral of the Lady of the Pillar. The Lady of the Pillar being, the mother of Jesus, who appeared in a piece of wood that now is inside the church, and who’s feast day is celebrated on October 12. 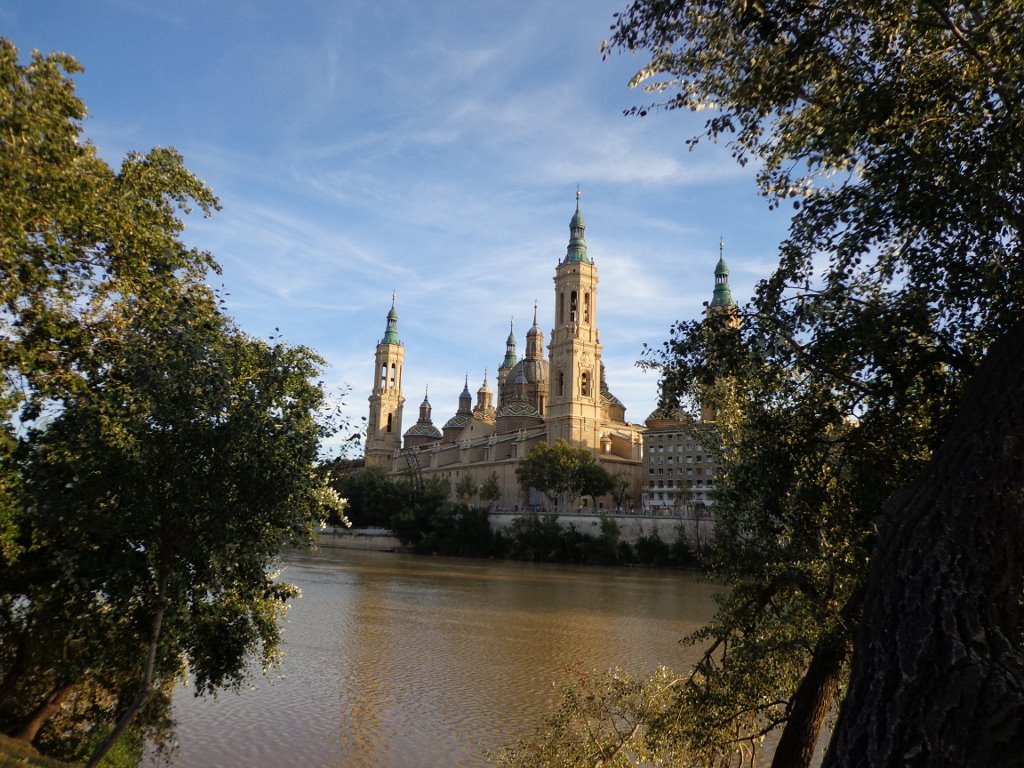 Another wonderful place to visit in Zaragoza is the Aljafería Palace. This 11th century Arab fortress has an imposing exterior and a beautiful interior with plenty of intricate decoration.

Do you see now, how Zaragoza is worth a visit even without the fantastic Fiestas del Pilar as an excuse to visit? There’s more. Such as the bullring.. 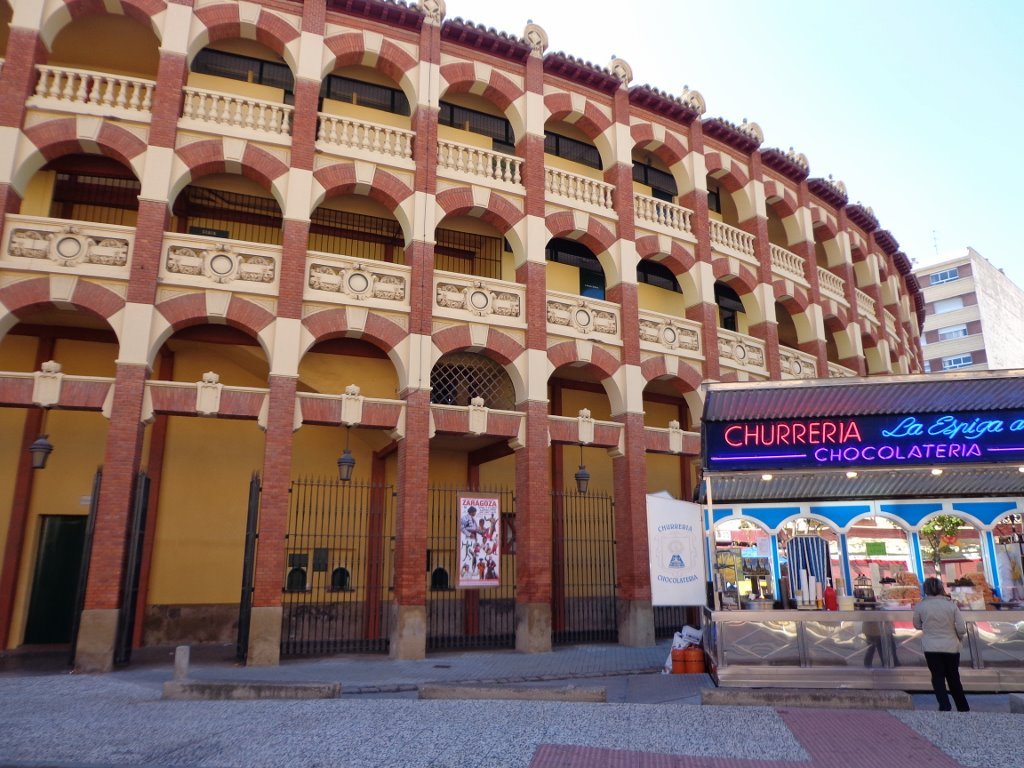 And the lively and fun “El Tubo” – a busy area just off the main plaza where there are a ton of bars and restaurants to do a tapas crawl. A few narrow streets are packed with people eating and drinking and socializing. El Tubo is also home to the best Migas I have ever had in Spain. Migas are bread crumbs mixed with other ingredients. Doesn’t sound like much but they are so good! 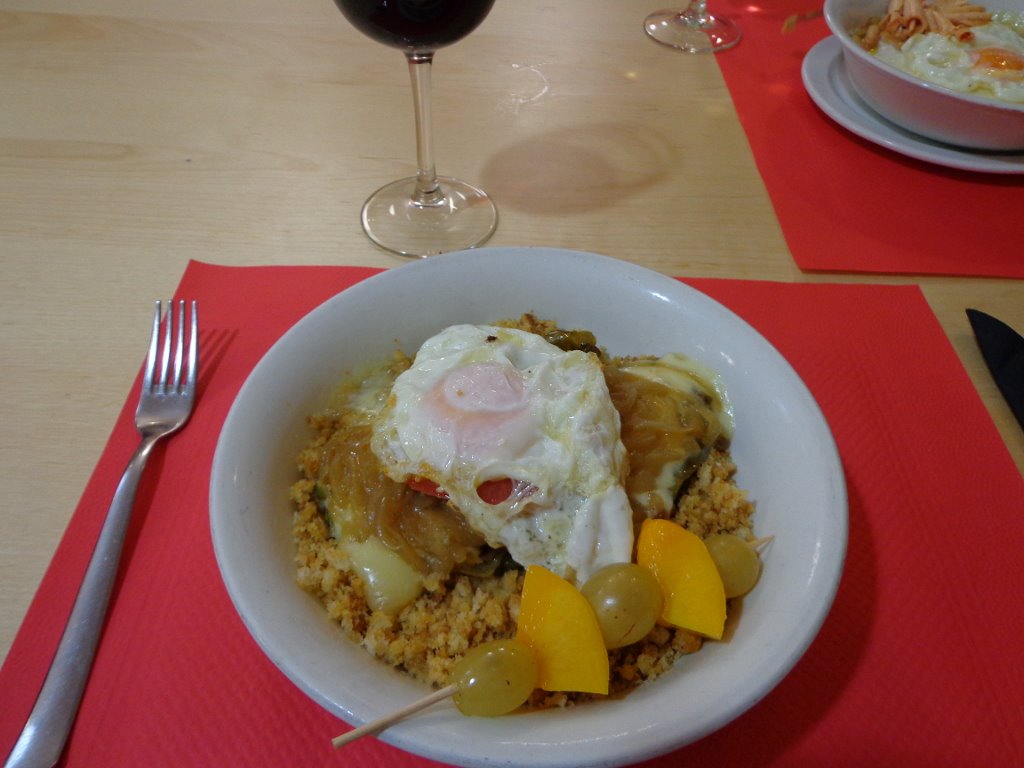 But that’s enough of Zaragoza’s charms. Let’s get to the Fiesta.

Fiestas del Pilar is a huge deal attended by tens of thousands of people, from Aragon and beyond. There are activities for all ages and families come to celebrate together. In the first days of the fiesta, there are processions of the “Gigantes” – giants – all over town. Of course this part of the fiesta is very popular with the kids. 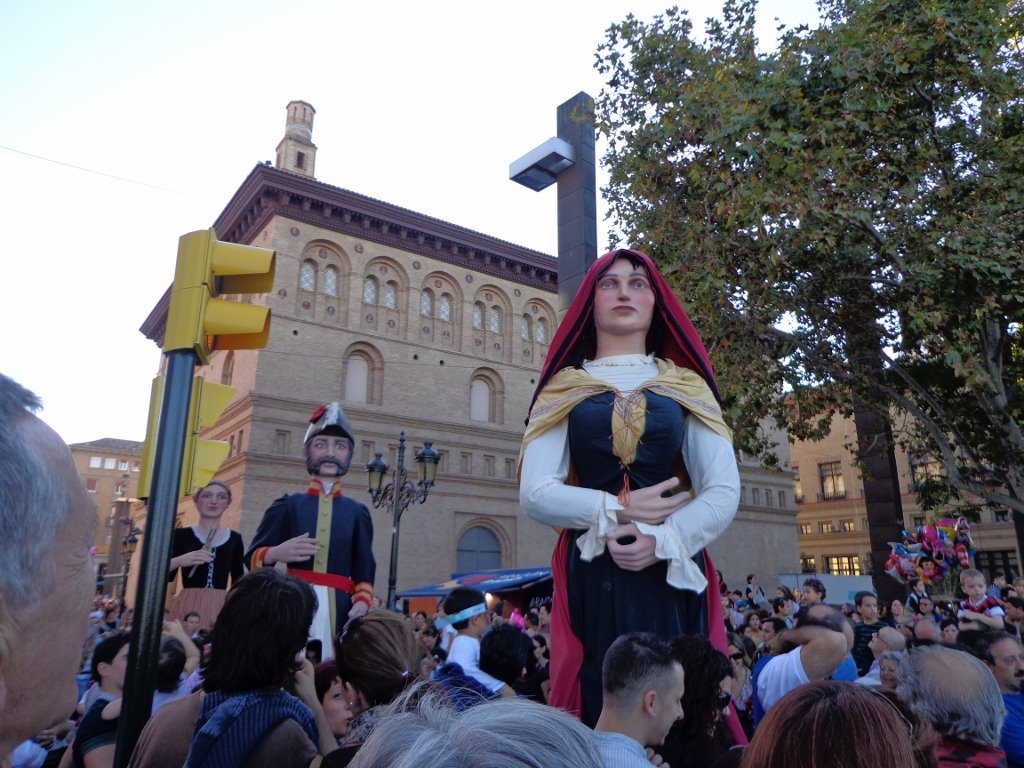 On the banks of the Ebro, close to the Cathedral, there is a an outdoor market with many stalls selling snacks, more elaborate meals, wine, and crafts. Folks working in the stalls sometimes wear historical costumes. 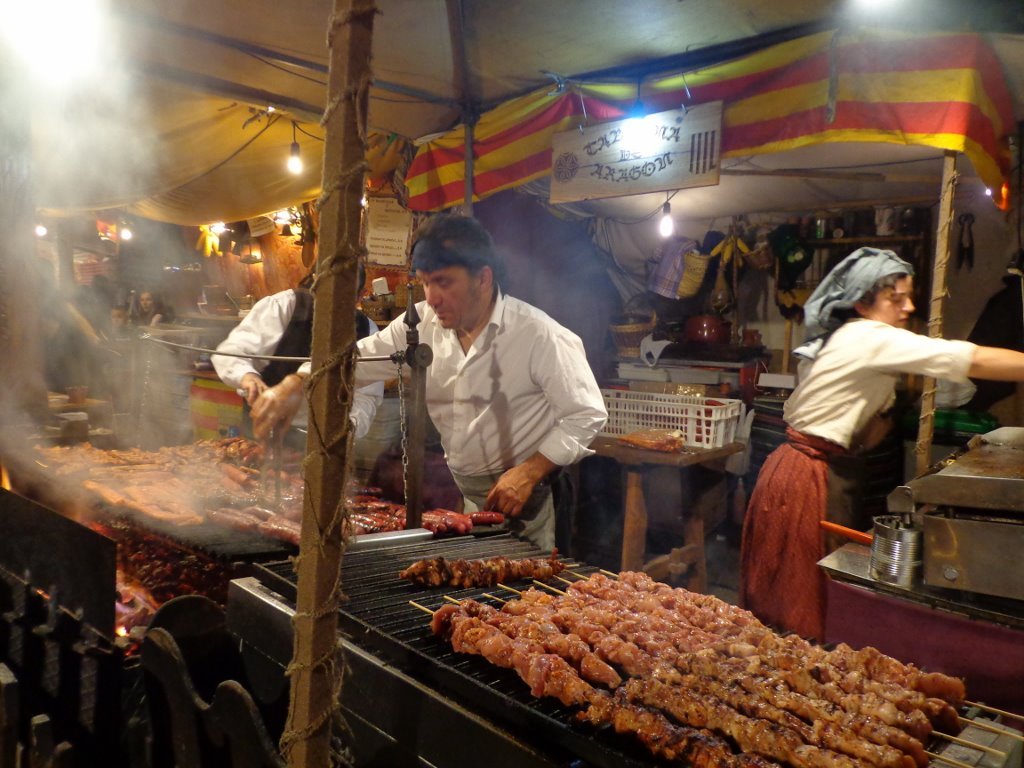 There are lots of other activities all over town, but the most important is the delivery of flowers to the Virgin. It is most impressive. A giant metal pyramid is built in the main square in front of the cathedral. On October 12, there is a massive procession of people, all dressed up in historical costumes, who bring flowers to the Virgin. All the flowers will be placed on the pyramid. This is what the pyramid looks like before there are any flowers on it: 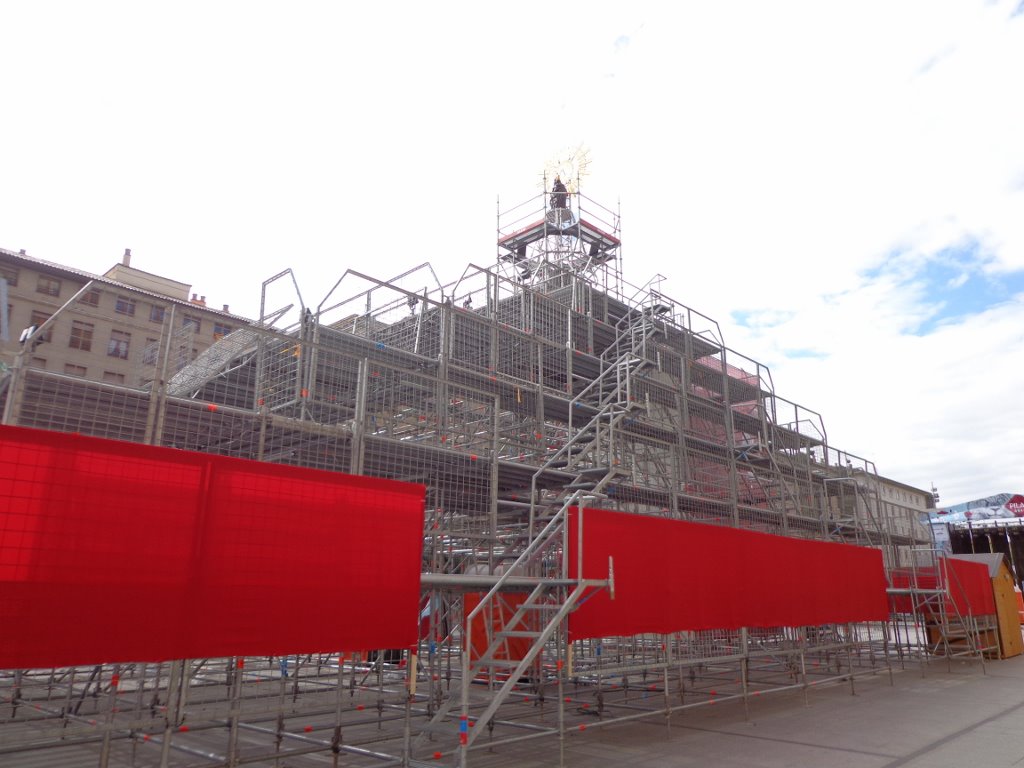 It is hard to see the scale in the photo, but it is huge! The procession, with people of all ages and in all manner of costumes spanning many centuries and even some other cultures, goes on for many hours. 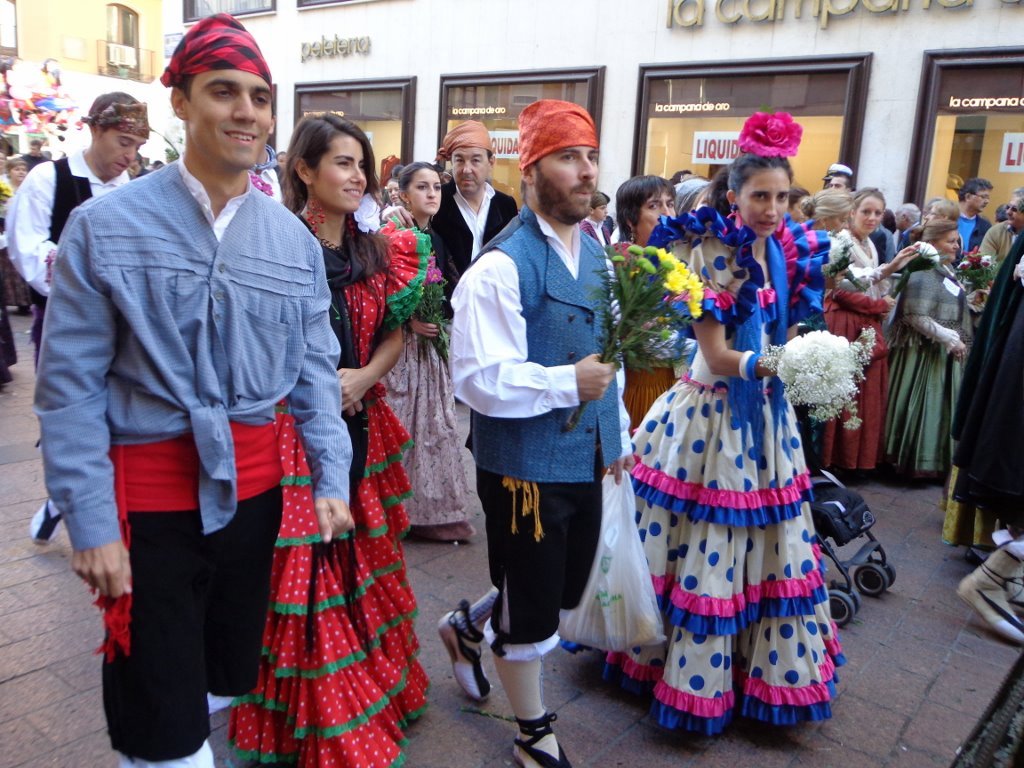 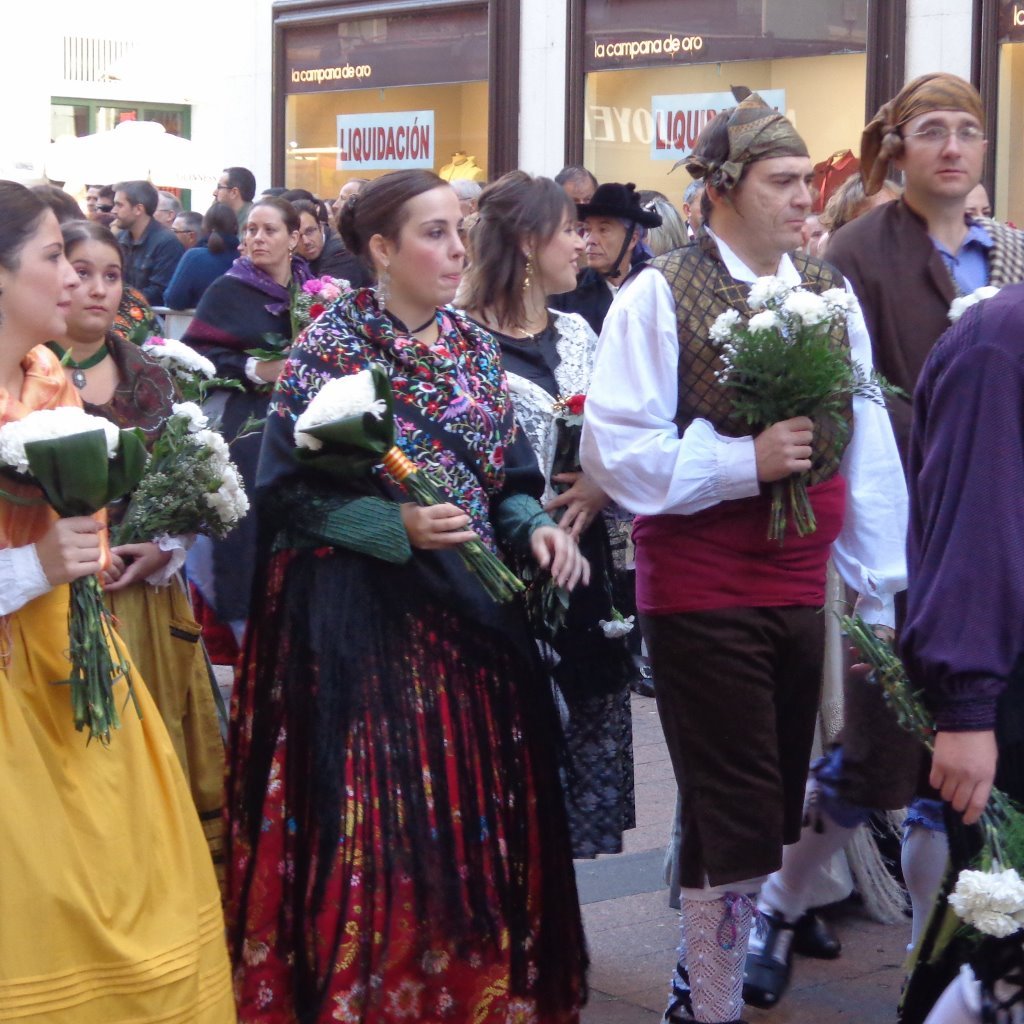 Once the people reach the pyramid and hand over their flowers, a team of flower runners transport each bouquet to a part of the pyramid, going up as they fill the pyramid with colorful blossoms.

There are so many people in the procession, that when after some hours of watching in one spot I decided to walk to the part of town where the procession started, there were still thousands of people waiting to walk! 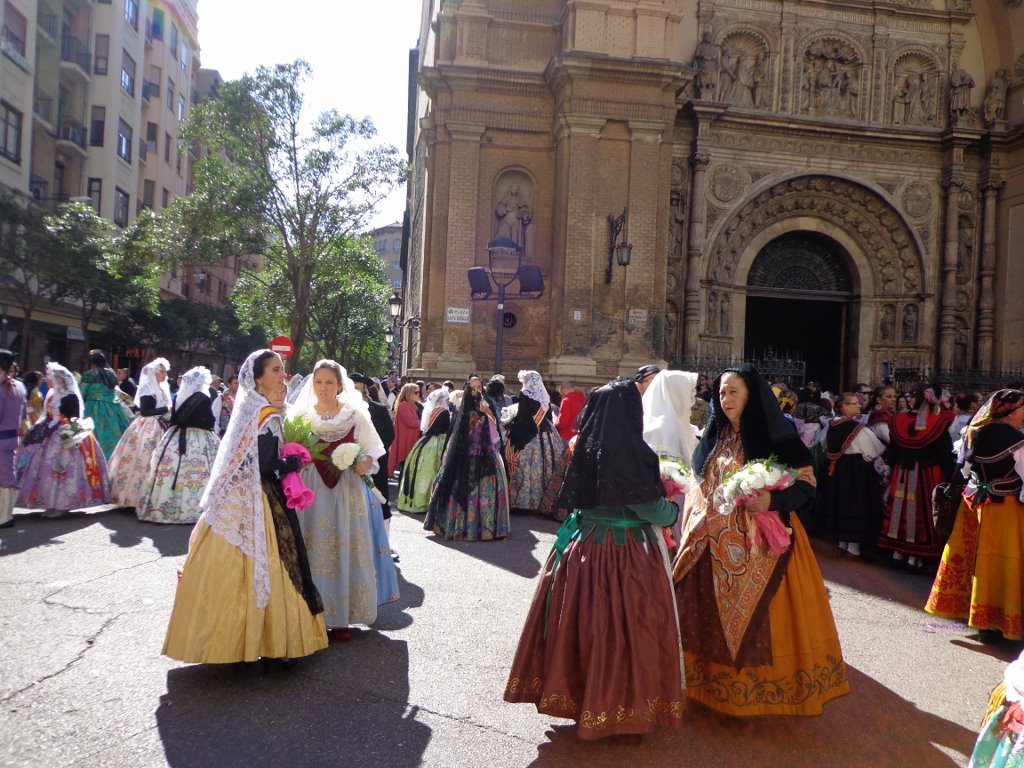 Once all the flowers are on the pyramid, it remains on display until the end of the fiesta. 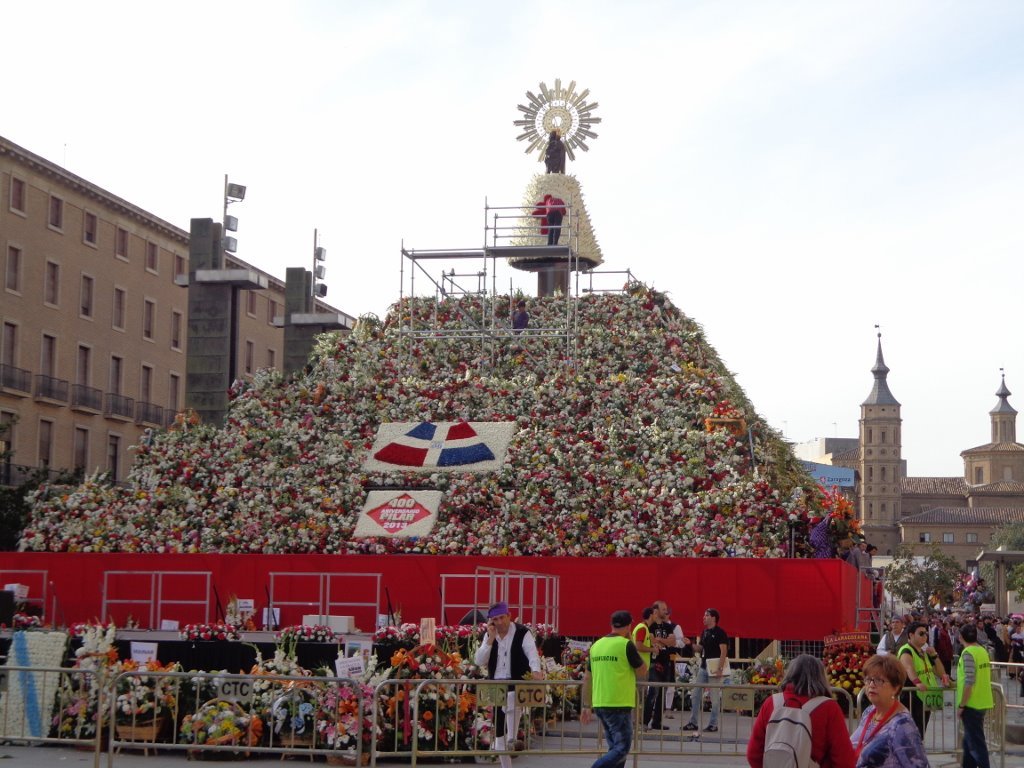 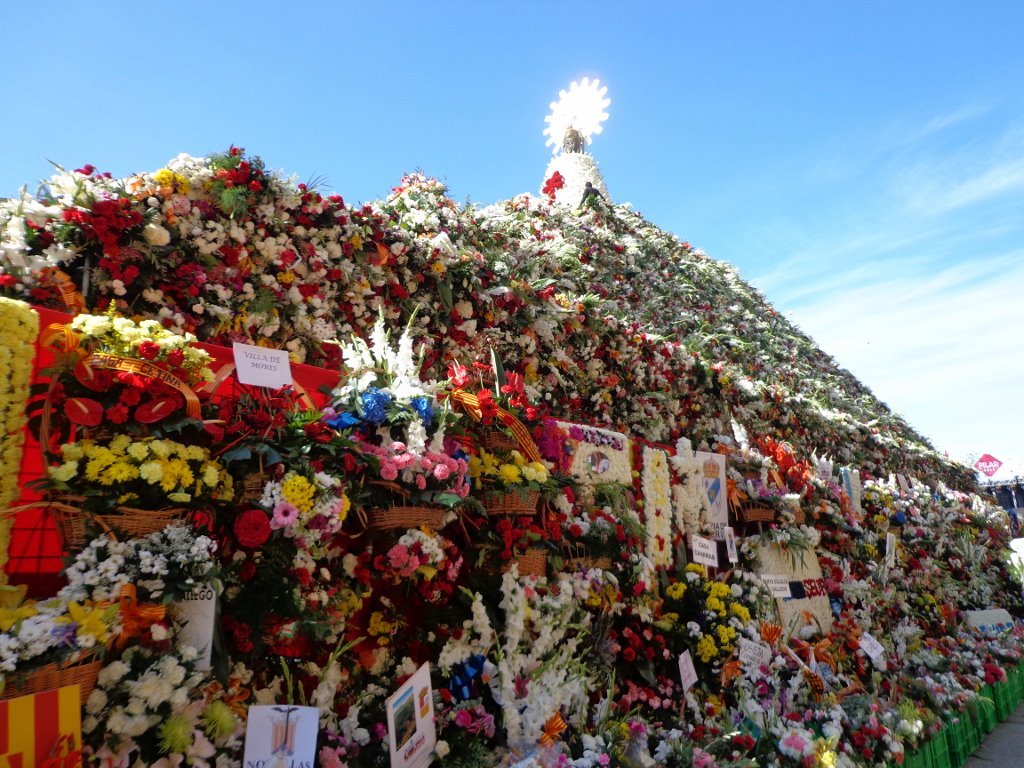 After the 12th, the party goes on with more eating, more drinking, more socializing and singing, other processions and events, and finally a big fireworks display. It truly is a wonderful fiesta that lovers of travel should try to experience once in their lifetime.